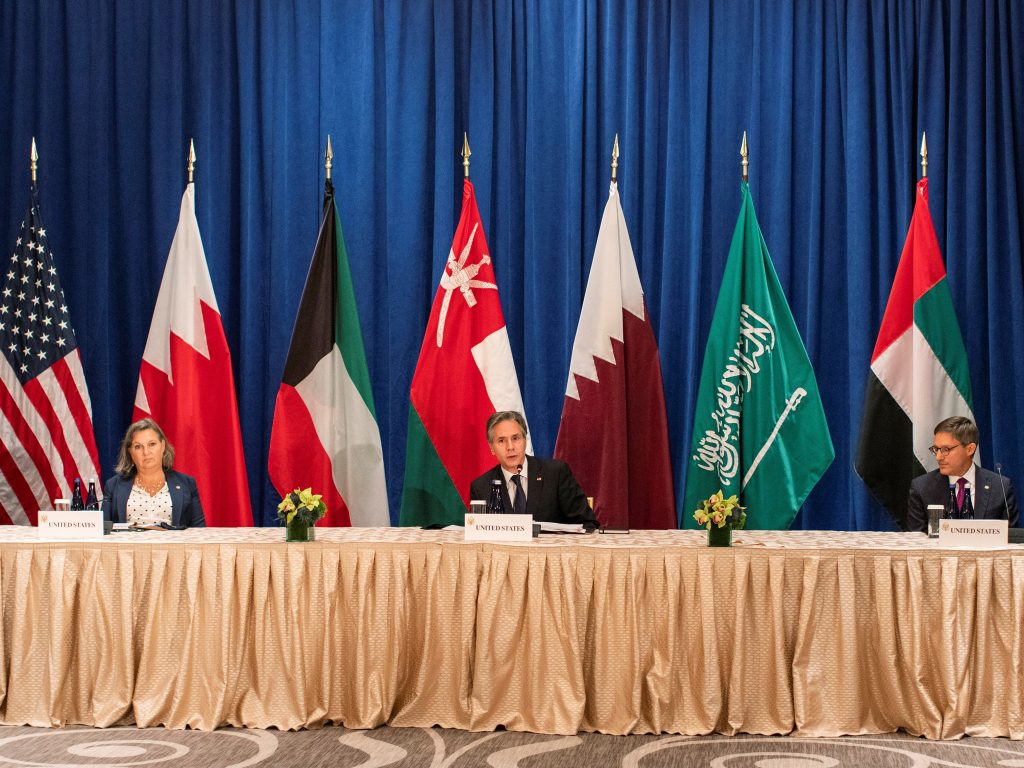 Russia’s war in Ukraine is impacting security dynamics in the Middle East, exposing fissures and fragile fault lines across the region. These divides, which are not new, have been gradually widening as a result of regional competition and security challenges emerging from the shifting global order. This process has unfolded over the course of three US presidencies—Barack Obama, Donald J. Trump, and Joseph R. Biden, Jr.’s—that each, in their own way, have prioritized redressing geopolitical tensions with Russia and China over resolving seemingly intractable Middle Eastern conflicts and rivalries.

Traditional US partners in the Arab Gulf who have long relied on US security guarantees have been more directly impacted by this shift that has left them increasingly exposed to threats from Iran. The growth of Russian engagement in the region through OPEC+ arrangements and militarily in Syria alongside China’s Belt and Road Initiative has resulted in regional states widening their aperture and capitalizing on Beijing and Moscow’s forays. However, neither Russia nor China has provided Gulf states with security guarantees to thwart regional challenges.

As a result, rather than unequivocally supporting the Western position on the war in Ukraine, Gulf monarchies have hedged, revealing their deep frustration with Washington and their profound concern over Iran’s aggressive regional posture. Effectively the war in Ukraine has presented an opportunity to strengthen Gulf security.

United by their concern over the United States’ waning attention and shifting security commitments to the region, the Gulf monarchies are employing different tactics to advance their interests. The United Arab Emirates and Saudi Arabia, for example, have taken a cautious approach to the Russian aggression in Ukraine, refusing to pick sides due to their growing grievances with Washington. Seen to be pursuing a hedging strategy designed to protect their security interests, both states have an opportunity to reset their ties with Washington, assert their relevance, and protect their short- and longer-term interests.   President Biden’s trip to Riyadh presents an important step towards achieving these goals.

While often lumped together, Abu Dhabi and Riyadh are not a monolithic bloc. They regularly cooperate and coordinate but also pursue independent and often competing paths.  They share deep frustration with the Biden administration’s regional approach which they see as favoring Tehran at the risk of their own security. Both states fear that efforts to revive the Iran nuclear agreement—the Joint Comprehensive Plan of Action (JCPOA)—that offer Iran the incentive of sanctions relief will remove what little leverage the international community has over Iran. The negotiations on the nuclear deal have only focused on Iran’s nuclear program and not on issues relating to Tehran’s support for proxy groups around the Middle East, the transfer of lethal aid to those groups, and its ballistic missile and drone programs. Saudi Arabia and the UAE are concerned that the threat Iran poses to their security interests will again go unchecked as it did after the JCPOA was signed in 2015.

Underscoring this concern, the missile and drone attacks by Iran-backed Houthis on Saudi Arabia and the UAE are a particularly sore point in the two Arab states’ relations with the United States. The UAE expected a strong condemnation of these attacks, including a phone call from the US president and support from Washington for the Emirati proposal to redesignate the Houthis as a terrorist organization. Instead, it was disappointed on all counts. The UAE has been further frustrated over the stalled sale of F-35 fighter jets, an incentive tied to its signing the Abraham Accords that normalized relations with Israel, and over US pressure to reduce technology cooperation with China.

The decision by Abu Dhabi to normalize ties with Israel put the UAE ahead of the pack in forging overt ties with Israel with which it hopes to strengthen defense cooperation. The UAE further hoped that through normalization it would be seen as a rising regional influencer. The UAE has also sought to diversify its defense posture by signing a large missile deal with South Korea and increasing cooperation with European suppliers.

Saudi Arabia, for its part, has a separate set of dynamics with which to contend. After the warm embrace of the Trump years, Biden rebalanced ties with Mohammed bin Salman (MBS) over the kingdom’s human rights record and the Saudi crown prince’s reported role in the murder of Saudi journalist Jamal Khashoggi. As the expected future king, MBS seeks a similar legitimacy and respect afforded to previous Saudi leaders but has felt snubbed by Biden’s unwillingness to deal with him directly. Under bipartisan pressure, Washington reduced military support for the Riyadh-led coalition fighting in Yemen.

In a belated effort to ease tensions, Washington has recently returned antimissile interceptors to the kingdom to help Riyadh’s war effort against the Houthis. But bitterness has mounted in the kingdom with MBS refusing Biden’s recent outreach. This carrot of support has not been enough though for the Saudi leadership to heed US calls to immediately increase oil supply.  Riyadh’s hedging reflects a similar pattern of distance and frustration seen between the two countries under the Obama administration. President Biden’s June trip to Riyadh however is set to turn the page on these past grievances and rebalance and redefine the US-Saudi relationship to address strategic gaps.

Taking a different approach, the smaller Gulf monarchies of Oman, Kuwait, and Qatar, however, have reaffirmed their longstanding support for the Western position on the Ukraine war.  This has also increased their relevance as energy partners for Europe as Russian energy slowly is reduced.  The three-and-a-half-year Gulf crisis where Saudi Arabia, the UAE, Bahrain, and Egypt’s severed ties with Qatar drew attention to political differences in the region thereby divergent Gulf positions should not be seen as surprising. Moreover, Bahrain, Qatar, and Kuwait’s major non-NATO ally designations afford these states closer US ties.

Gulf monarchies are conscious of the fact that the divide with Washington over regional security is not new. Rather it began during Obama’s presidency when Washington flip-flopped in its support for the Arab Spring uprisings that brought down Hosni Mubarak, the United States’ longtime partner in Egypt; sponsored the JCPOA; allowed Iran’s regional expansion in Iraq and Syria; and called for “Riyadh and Tehran to share the region.” While the UAE and Saudi Arabia welcomed Trump’s renewal of traditional US partnerships, they were let down by his transactional approach and unwillingness to defend Gulf security, particularly after the Houthis conducted drone strikes on Saudi oil facilities in September 2019. Biden’s decision to withdraw US troops from Afghanistan in 2021 hammered home the shift in US priorities.

For its part, Washington has tried, albeit unsuccessfully, to assuage Gulf countries’ security concerns. The Biden administration appears to be preparing a proposal to address these concerns but risks falling short of the top-line expectations of securing a NATO-like security structure that would protect the interests of Gulf countries.

While differences with Washington abound over energy and the revival of the Iran nuclear deal, the war in Ukraine has offered Gulf monarchies an opportunity to repair their frayed ties with the United States. Both Abu Dhabi and Riyadh have hinted that they are open to rethinking the contours of the relationship. A broader, longer-term objective would be to anchor their relationship with the United States in a defensive security partnership against Iran. These dynamics have led the Gulf states to pursue a two-tier approach.

The uncertain outcome of the JCPOA talks continues to guide differences over providing sanctions relief to Iran. Gulf states are aware that a no-deal scenario with Iran could put them back in Iran’s line of fire. As such, GCC states are engaging with Iran directly to address immediate security challenges. Iran’s maximum resistance strategy employed in 2019, marked by attacks on tankers, shipping disruption, and an uptick in drone and missile attacks, impacted the economic and security climate of the Gulf region. Despite having championed Trump’s withdrawal from the JCPOA in 2018, the UAE’s approach during this period was to quietly deescalate tensions with Iran. This outreach, however, should not be mistaken as a profound shift on Abu Dhabi’s part, rather it is a tactical adjustment. Neither Abu Dhabi’s threat perception nor its fundamental security vulnerabilities have altered.

Riyadh, however, waited until after the 2020 US elections to begin back-channel talks with Tehran in April 2021. MBS publicly shifted his tone stating, “Iran is a neighboring country, and all we aspire for is a good and special relationship with Tehran.” Kuwait, Qatar, and Oman, which have all maintained open channels of communication with Iran, have welcomed this change in posture. Their independent policies of direct engagement are seen from their vantage point as providing a better foundation to address regional security challenges and shield them from Iranian threats. While the bilateral Riyadh-Tehran talks, orchestrated by Baghdad, have yet to yield a meaningful outcome, they could result in a resumption of diplomatic ties that have been broken since the attack on the Saudi Embassy in Tehran in 2016. More importantly, the dialogue aims to arrive at agreements that would reduce Iran’s support for the Houthis and broader regional destabilization capacity in exchange for supporting Tehran’s regional economic and political rehabilitation. At the same time, Riyadh is skeptical that a profound change in Iran’s regional strategy can be achieved.

The second approach is to have a defensive security framework with the United States. This arrangement would formalize a security-based bilateral and multilateral structure that would integrate Gulf military cooperation with the US Central Command to coordinate technical cooperation and intelligence sharing alongside air and naval defense. Over time, this initiative could include Israel through the Abraham Accords as well as other Arab states such as Egypt and Jordan, effectively creating a multilateral defensive security architecture. Above all, such a move would keep the United States engaged in protecting Gulf security while also bolstering Gulf countries’ defensive capacity.

These short- and long-term approaches would see Gulf states aiming to address their security challenges and concerns with Iran while affixing their long-term security to a US-supported defensive security framework. Keeping in mind these objectives and security challenges, there is an opportunity for Washington to redefine its engagement with the Gulf countries along lines that will balance and support its partners.

Image: U.S. Secretary of State Antony Blinken (C), Under Secretary of State for Political Affairs Victoria Nuland (L) and Counselor of the Department of State Derek Chollet meet with Foreign Ministers of the Gulf Cooperation Council (GCC) Nations on the sidelines of the 76th Session of the U.N. General Assembly in New York, U.S. September 23, 2021. REUTERS/Eduardo Munoz/Pool