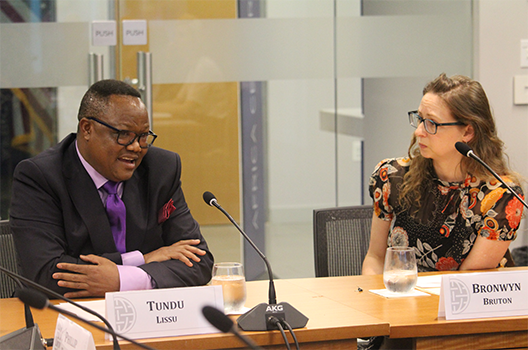 On February 7, the Atlantic Council’s Africa Center hosted a discussion with Mr. Tundu Lissu, parliamentarian and chief whip of the Chadema opposition party in the National Assembly of Tanzania, on the state of democracy in his country.

In his remarks, Lissu discussed President John Magufuli’s perceived campaign to curtail democracy and civil rights since he came to power in 2015. He described the political climate in Tanzania, which was once hailed as a democratic success story, as “one long night of horrors,” with critics in the political opposition, the press, and civil society regularly subjected to violence, intimidation, and arbitrary incarceration. Lissu also discussed Magufuli’s nationalist drive to combat international exploitation of the country’s natural resources, instituting laws that mandate a government stake of at least 16 percent in several industries. He claimed these actions have driven out foreign investment, hiked up unemployment, and hurt economic growth.

Lissu, who is still recovering from being shot sixteen times in 2017 (an attack many feel was politically motivated), nevertheless expressed hope that the international community could pressure the Magufuli government to improve the human rights situation on the ground. Dismissing the current president’s professed disregard for international engagement, he encouraged donor countries to “call his bluff” by threatening to turn off the foreign aid spigot that has long propped up Tanzania’s budget, highlighting the European Union’s decision to recall its top diplomat in Tanzania and launch a comprehensive review of its policies towards the country.