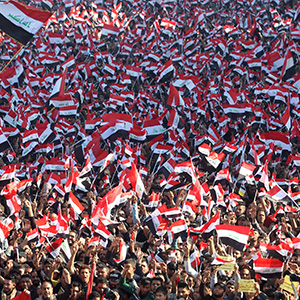 WASHINGTON, DC – The Atlantic Council releases today the report of the Task Force on the Future of Iraq chaired by Ambassador Ryan Crocker and convened by Senior Nonresident Fellow Dr. Nussaibah Younis.

The report offers a strategy for how the United States can build on the success that the Iraqi government and its coalition partners have had in liberating areas once occupied by ISIS, in order to bring about a lasting defeat of the extremist group and to and secure US national security interests in Iraq over the long term.

The report demonstrates that a stable Iraq is critical to US national security interests because:

–          A secure Iraq will limit the capacity of terrorist groups both in Iraq and the wider Middle East
–          A strengthened Iraq will be better able to resist Iranian interference
–          A economically vibrant Iraq will reduce the influence of radicalism, and will strengthen regional economies including key US allies such as Jordan

In pursuit of a strong and stable Iraq, the report recommends that the United States:

–          Publicly commits to engaging in and supporting Iraq in the long term
–          Focuses on improving governance, thereby strengthening the legitimacy of the Iraqi government
–          Strengthens the Iraqi economy, by encouraging economic reform and international investment
–          Continues training and equipping Iraqi Security Forces beyond the defeat of ISIS
–          Mediates between Baghdad and the Kurdistan Regional Government

By pursuing these steps, the Task Force hopes that the United States can secure its national security interests and those of Iraq, and prevent the country from becoming vulnerable to resurgent extremism in the future.

Frederick Kempe, president and CEO of the Atlantic Council, says of the report: “Ambassador Ryan Crocker and Nussaibah Younis lay out a persuasive case for US leadership in Iraq, both to ensure that considerable past US investments are not wasted and to take much-needed action against groups such as ISIS perpetrating heinous violence that affects the region as well as the United States and our friends and allies.”

The Task Force on the Future of Iraq brought together the world’s most preeminent experts on Iraq to address the underlying drivers of conflict in the country, and to map the ways in which the country can realistically tackle the problems that have enabled the rise of violent extremism and conflict. The primary goal was to equip policy makers in Iraq, the United States, and the international community with evidence-based tools that they can use to help stabilize Iraq, to initiate a comprehensive reconciliation process, and to help prevent future conflict.