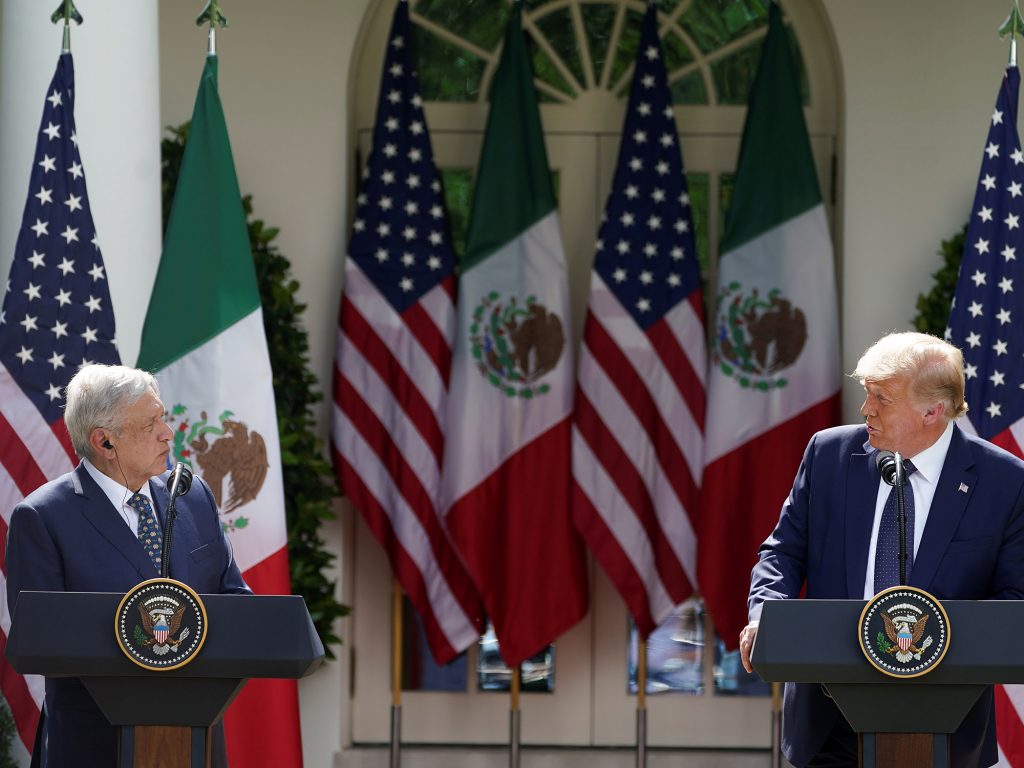 On June 9, 2020, the Atlantic Council’s Adrienne Arsht Latin America Center hosted a timely conversation on President Andrés Manuel López Obrador’s visit to Washington, DC—the president’s first international trip as head of state. Experiencing economic contraction and public health crises due to the COVID-19 pandemic, both presidents highlighted the bonds that unite their countries and emphasized areas for increased cooperation. Our discussion delved into the takeaways of the official working visit and the roadmap ahead for the US-Mexico relationship.

The conversation focused on the priorities for strengthening US-Mexico relations in general, North American economic integration, and building partnerships to battle the COVID-19 crisis. Ambassador Bárcena emphasized that while President López Obrador’s main objective was to celebrate the entry into force of the USMCA, there was a broader agenda. The visit exposed a greater need to enhance cooperation on fighting COVID-19, particularly in the border region, as well as a greater recognition of the contribution of Mexican communities across the United States.

When asked about the major accomplishments during the trip, Ambassador Landau highlighted the importance of an in-person meeting to strengthen the friendship between both presidents and, consequentially, bilateral relations. He highlighted that the most important takeaway from the visit was that both presidents were able to talk in a more relaxed setting and that “there was a genuine bond created between [the] presidents, and that [such] bond will pay off in crises that we do not yet anticipate.” Ambassador Bárcena added that for Mexico, there was a clear change of tone in rhetoric, with President Trump “recognizing the increasing importance of the Mexican and Hispanic communities in the United States.”

During the reception dinner, President Trump and President López Obrador had an opportunity to listen to specific concerns from leaders in the private sector and innovative ideas to bring investment back to the North American region. Ambassador Landau stated the need “to strengthen the institutions that we have to regulate the flow of commerce and supply chains.” Additionally, he stated that it is imperative to recognize the region’s economic interdependence, and there is a growing need for a body that coordinates supply chains regionally.

Marczak asked Ambassador Bárcena about President López Obrador’s decision to not meet with Democratic leaders and Mexico’s commitment to work across the bipartisan aisle. Ambassador Bárcena reiterated Mexico’s commitment to engage with congressional members from both parties and explained that the decision was based on sanitary measures due to COVID-19. She stated that she is “sure that both Democrats and Republicans understand the relevance of Mexico, [as] Mexicans, understand the importance of keeping the dialogue with both political parties.” She underscored Mexico’s continued commitment to working with Congress and with Democrats on labor and environmental rights issues.

As countries consider the post-pandemic socio-economic realities, both speakers agreed on the potential for greater economic integration across the North American region. When asked about their upcoming priorities, the ambassadors concurred that the USMCA provides a new foundation for relocating supply chains from Asia. Additionally, both Ambassador Landau and Bárcena highlighted the importance of establishing an independent committee that would coordinate supply chains throughout the North American region in the case of another crisis. This committee would also identify the most relevant sectors for the region’s development. In his closing remarks, Marczak emphasized that “US-Mexico cooperation is fundamental for North America’s ability to effectively compete in the global economy.”

Image: US President Donald Trump turns to Mexico's President Andres Manuel Lopez Obrador as the leaders deliver brief statements prior to signing a joint declaration in the Rose Garden at the White House in Washington, US, July 8, 2020. REUTERS/Kevin Lamarque