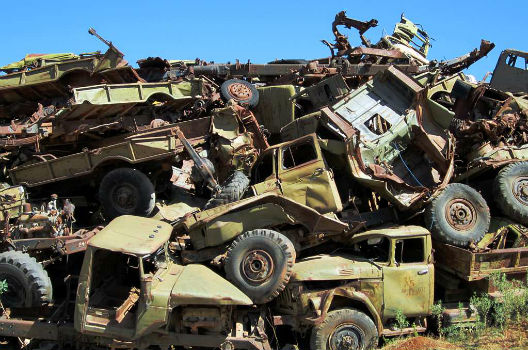 According to Eritrean officials, in the early hours of Sunday, June 12, Ethiopian forces launched an unprovoked assault over the Eritrean border at the town of Tsorana. Heavy fighting lasted throughout the day and continued after dark, when the Eritrean forces managed to launch a counter-offensive that ended the assault.

Near midnight on June 12, Eritrea’s information minister released a press statement accusing Ethiopia of the attack, and stating that “the purpose and ramifications of this attack are unclear.” Privately, officials expressed concern that the skirmish could presage a return to full-scale war.

Eritrean officials suggest a review of satellite images of the Ethiopian-Eritrean border, which they claim will show that Ethiopia has been building up its forces over the past two months. That would not be surprising, as Ethiopian Prime Minister Hailemariam Desalegn has repeatedly and very recently warned of his intention to use “proportionate military force” against Eritrea in response to its “provocations,” though the United Nations Somalia and Eritrea Monitoring Group (SEMG) has found little evidence of destabilizing acts by Eritrea in recent years.

The United States, EU, and United Nations Security Council should act quickly to ensure that Sunday’s border skirmish does not escalate further. And for once it should point the finger of blame firmly at Ethiopia. Past aggressions by Ethiopia have failed to draw censure from the international community, but the refusal to assign blame in this latest incident would dangerously threaten stability in the Horn. The details of the current conflict may be unclear, but Ethiopia has been frank about its desire to punish Eritrea militarily. Given that, the dire escalation of the conflict on the Ethiopia-Eritrea border was utterly predictable. And the international community is complicit in this escalation, because it has consistently failed to censure Ethiopia for its past aggressions.

Who is to blame?

Ethiopia has denied that it initiated the conflict at the Tsorona front on Sunday, but only weakly. When questioned, Ethiopia’s information minister, Getachew Reda, initially claimed to know nothing about the fighting. Later, he vaguely accused Eritrea of provoking the skirmish, calling the fighting “an Eritrean initiative,” and referring to “an incident on the Ethiopia-Eritrea border” and “a provocation”—one that apparently triggered a rapid and unprecedentedly large-scale deployment of Ethiopian heavy artillery and tanks.

Gedab News has subsequently offered what seems, on its face, to be a fairly credible account of what might have occurred. The account alleges that Eritrean forces chased a group of deserters onto Ethiopian territory, where they skirmished with at least three of the Eritrean rebel groups that are being illicitly backed by Ethiopia. The article notes that neither Eritrea nor Ethiopia would want the details of such an incident to slip out, since it suggests not insubstantial misconduct by both sides. But whether or not this particular account is accurate, it’s fairly likely that some minor incident along these lines occurred on Sunday at the Tsorona front—as such incidents do, with some regularity, along the militarized border—and that Ethiopia seized the opportunity to pursue Eritrea’s forces back across the border with tanks and heavy artillery, apparently causing a substantial loss of life. The pursuit of Eritrean forces over the border (which has not been demarcated due to Ethiopia’s refusal to comply with the terms of a 2000 peace treaty and subsequent boundary determination) was predicted by Hailemariam’s ongoing threats to punish Eritrea with military force.

I cannot of course rule out the possibility that Eritrea may be single-handedly responsible for this latest border skirmish. But Ethiopia’s failure to offer any specific explanation of what Eritrea has actually done to provoke such a significant strike should be regarded as a red flag of blame, as should Getachew’s press statement in Addis Ababa on Tuesday morning, in which he argued that Eritrea simply deserved to be attacked: “We believe that the regime doesn’t have any moral ground whatsoever to complain to the international community that it has been attacked because it has all along been working to invite such an attack from any responsible country in the region.”

Getachew then referred to Eritrea’s efforts to “destabilize” the region. This is a constant Ethiopian refrain, but because he made no specific allegation, it remains unclear what Ethiopia thinks Eritrea has done to provoke an attack.

(The SEMG is charged with monitoring the arms embargoes on Somalia and Eritrea, and routinely investigates Eritrea’s activities in the region. For the past several years, it has reported that both Ethiopia and Eritrea have continued to fund rebel and opposition groups operating on each other’s territories. But it has failed to uncover any significant destabilizing acts or violations by Eritrea. And there is no doubt that the volume of funding provided to rebel groups by Ethiopia vastly exceeds that which is provided by the much smaller, and poorer, Eritrea.)

Ethiopia has recently complained about efforts by Saudi Arabia and the United Arab Emirates (UAE) to improve Eritrea’s ports, which they hope to use as a launching pad for assaults against Al Qaeda affiliates in Yemen. But there is no evidence that the UAE cooperation will adversely affect Ethiopia’s security. Unrelatedly, Ethiopia has also recently accused Eritrea of fomenting protests by Oromos in the southern part of the country. But that claim is wholly unsubstantiated, has been denied by the Oromo protesters, and is routinely dismissed by security analysts and human rights investigators.

Earlier this year, in March, Ethiopia’s prime minister publically threatened to take military action against Eritrea in response to various alleged acts of “provocation” and “destabilization.” It is very likely that the attack on the Eritrean border is simply a fulfillment of what was, in effect, a public pledge to escalate the conflict with Eritrea at the earliest opportunity.

Ethiopia has a history of attacks on Eritrea. In March 2012, Ethiopia illegally sent troops across the Eritrean border to attack three military bases that it claimed were operated by the Afar Revolutionary Democratic Unity Front. In March 2015, Ethiopia bombed two targets in Eritrea, apparently in retaliation for an EU decision to provide development funding to Eritrea. (Neither Eritrean nor Western diplomats will consent to discuss this incident on the record, but the basic facts of the incident are already in the public arena.) Eight soldiers were killed in the strike on a military depot in Asmara; and in violation of the rules of war, the other strike was directed at a civilian target, a Canadian-operated mining venture at Bisha. No-one was killed in that attack, and it appears to have been intended to undermine investor confidence in Eritrea’s security.

The United States, European nations, and the United Nations Security Council failed to censure Ethiopia for these attacks—nor have any of these bodies respond to Prime Minister Hailemariam Desalegn’s very public threats to use military force against Eritrea (for example, in speeches made in October 2015, November 2015, and March 2016). This failure to contain Ethiopia’s repeated aggression has unquestionably contributed to a sense of impunity on the part of Ethiopia, which is also considered an essential partner of US counterterror efforts in the Horn of Africa region. Because of Ethiopia’s key role in US security efforts, Washington has typically avoided criticizing Ethiopia’s regional aggressions, as well as its escalating domestic civil and human rights violations.

Who benefits from the skirmish?

Some analysts have argued that Eritrea stands to benefit from the conflict, because “it diverts attention away from the alleged crimes against humanity, and [justifies Eritrea’s] need for an enormous and compulsory conscription,” according to Charlotte King of the Economist Intelligence Unit.

That could be so – I would be the first to admit that the motivations of both the Eritrean and Ethiopian regimes are inscrutable to distant eyes. But I would assess that the Eritrean regime has little to gain from contributing to a media narrative that is already focused on its “bad behavior” at home and in the Horn. And, given the ongoing and illegal occupation of Eritrean territory by Ethiopian troops, on top of the aggressions cited above, Eritrea does not have to work that hard to prove that has significant national security concerns stemming from its border conflict with Ethiopia. If anything, media headlines about the border are likely to draw more attention to the crimes against humanity charges, by keeping Eritrea’s affairs in the news.

Giving Ethiopia an excuse to restart the border war would also be a dangerous gamble by Eritrea. In the years since the last border war ended (in 2000) Ethiopia has been flooded with development and military assistance, the latter given by the US and EU in exchange for Ethiopia’s participation in the UN peacekeeping mission in Somalia. At the same time, Eritrea has been starved of both economic investment and development support, and has lost hundreds of thousands of youth to migration. Both factors have no doubt caused a substantial decline in Eritrea’s military capabilities. If Ethiopia and Eritrea go back to war, it’s clear who would win. And it would be suicide for Eritrea to provoke such a conflict at time when the world’s opprobrium is focused on Asmara. The odds of any nation or intergovernmental body rising to Eritrea’s defense is painfully slim – as the muted response to Sunday’s fighting has shown.

If Ethiopia wants a war, on the other hand, there’s good reason to think that there will never be a better time. The US national security advisor, Susan Rice, is a committed defender of the Ethiopian regime and will remain in her office for only a few more months. With the allegations of crimes against humanity, international criticism of Eritrean has certainly plateaued. And Ethiopia is facing a worrying pile-up of domestic problems, particularly among its Muslim and Oromo populations, but also in the Gambella and Somali regions, among others. The temptation to quell domestic unrest by uniting the population against an external foe must be fairly strong, and Ethiopia’s Tigrean elite has long desired absolution for its loss of Eritrea and, in particular, the port of Asab. “A second round of full-scale war between Ethiopia and Eritrea cannot be ruled out,” Ethiopia’s information minister says.

No pragmatic analyst of US foreign policy could demand that Washington exercise its responsibility to ensure the implementation of the Algiers Agreement, which Ethiopia has violated for the past thirteen years. No matter how just that demand, no matter how long overdue, no matter how profoundly such action would increase the stability and peacefulness of the Horn, it is simply not realistic to expect Washington to take up this burden at a time of global economic instability and ever-escalating security concerns. But there is no excuse for Washington’s silence in the face of Ethiopia’s clearly announced intention to restart hostilities against Eritrea, and in the face of its continued military aggressions. Ethiopia is testing the waters for a return to war.

For now, the Ethiopian forces have withdrawn, and it is to be hoped that Washington is exerting pressure on Addis Ababa behind closed doors. Because: If Ethiopia and Eritrea go back to war, Washington, the European Union, and in particular the UN Security Council, will have no one but themselves to blame.

Image: Destroyed military equipment is piled high in the "tank cemetery" in Asmara, a product of a previous confrontation between Ethiopia and Eritrea (Photo credit: Flickr/David Stanley)