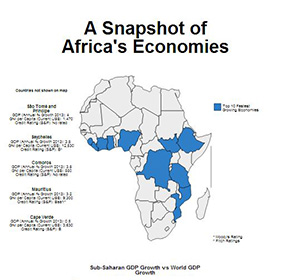 The US-Africa Leaders Summit concluded last week, and in honor of the billions of dollars’ worth of deals that emerged from the Summit, the Africa Center has created a series of maps and charts—a new one of which will be released daily—highlighting different aspects of the continent’s economic story. The map featured here presents three basic economic indicators for each country in Africa, and notes the ten-fastest growing economies on the continent. Tomorrow’s map will explore African trade.