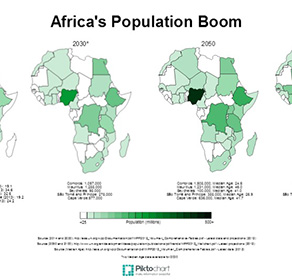 Africa’s demographic trends have been gaining attention for years, and our last maps for this week show why. Africa today has just over 1 billion people, but by the end of this century it is projected to hold more than 4 billion. Nigeria is a major part of the story; already Africa’s most populous country with approximately 178 million people, its population is projected to grow to more than 900 million by 2100. Or in other words, in 2100 almost every fourth African will be a Nigerian.

As a percent change in population, however, even Nigeria cannot match other African countries whose projected growth is truly eye-popping. Niger’s population is expected to grow nearly 1,000 percent between 2014 and 2100; Zambia’s, 728 percent; Mali’s, 539 percent; Tanzania’s, 443 percent; and rounding out the five biggest growers as a percentage of population, Burundi’s at 437 percent.

But the overall story of Africa’s population trend is massive growth. Such a boom brings with it obvious challenges: increased pressure on finite resources, strain on governments’ ability to provide services to their people, and the need for jobs for billions of young people entering the workforce. But the trends also represent an extraordinary opportunity for African countries. By mid-century, a quarter of all working age people in the world will be in Africa, and the size of the continent’s potential consumer class will have exploded. This revolution could be a profound driver of growth for those governments that are able to effectively manage their population booms.