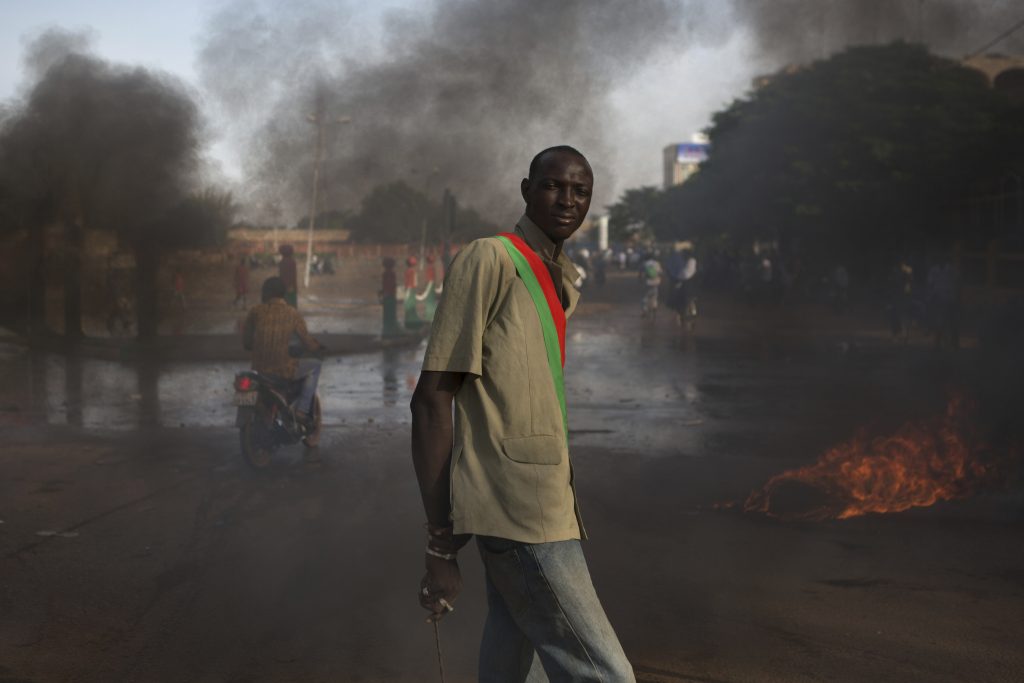 The events that have followed each other in rapid succession this week in the West African country of Burkina Faso are, at one level, relatively straightforward. What is not so readily apparent—certainly not to the tens of thousands of protesters-turned-rioters, much less to those far-off outsiders who, wittingly or unwittingly, egged them on—are the consequences of what they have wrought.

President Blaise Compaoré originally came to power in a 1987 coup d’état and has governed the country ever since, having been subsequently confirmed in office by the electorate in increasingly open polls. Faced with a term limit under a constitution adopted in 2000 that would have prevented the incumbent head of state from running again in the presidential election scheduled for late next year, Compaoré’s supporters introduced legislation that would abolish the restriction and the National Assembly was scheduled to take up the measure on Thursday. Since the ruling Congress for Democracy and Progress does not have the super-majority required to pass a constitutional amendment on its own, the debate was expected to be vigorous and accompanied by what was, undoubtedly, a large amount of political horse-trading before final passage.

Deliberations, much less a parliamentary vote, never got underway. Protests, some involving unprecedented thousands of participants, have been taking place all week in the capital of Ouagadougou with the masses—some brandishing pictures of Compaoré’s murdered predecessor, the Marxist revolutionary Thomas Sankara, often dubbed “Africa’s Che Guevara”—chanting their opposition to any extension of the current president’s time in office. Tensions were so elevated that by Thursday, even Prime Minister Luc-Adolphe Tiao’s announcement that the amendment was being withdrawn was not enough to mollify the assembled mobs, which set about ransacking the offices of the national broadcaster and then burning down the city hall and several other public buildings, before finally looting and setting the main parliament chamber on fire. In the mayhem, at least three protesters were shot dead by security services.

Shortly thereafter, roving bands of youths began attacking the private residences of politicians, making little distinction—if they even knew or cared at all—between government supporters and opposition members, with even representatives opposed to Compaoré forced to flee for their lives. One opposition parliamentarian, Alassane Ouedrago, lamented to the Associated Press that “things are out of control because the demonstrators do not listen to anyone.” Outbreaks of violence also erupted elsewhere in Burkina Faso, including Bobo-Dioulasso, the country’s second-largest city, where numerous shops and other businesses were pillaged.

By Thursday evening, notwithstanding the proclamation of a national state of emergency by the president, the violence continued. Finally, the army chief of staff, Major General Honoré Nabéré Traoré, stepped forward with a decree dissolving both the National Assembly and the government, imposing a curfew, and promising the formation of an inclusive government to organize elections in twelve months’ time. After several hours of confusion about whether the president would have a role in this transition or even whether he was still in the country—wild rumors flashed repeatedly across social media and news stories described a “coup”—Blaise Compaoré appeared to give an address on national television to confirm the dissolution of the government, announce the lifting of the state of siege, and reported that he would open discussions with the political opposition and civil society. The president also announced that at the end of the transition period, which he would lead, he would “transfer power to a democratically elected president.”

Despite the calls for calm, there were still some protests on Friday as demonstrators called for the president’s immediate ouster. If they and the opposition politicians who used social media to urge more mass protests prevail, then there will be consequences, many of which those foreign governments whose statements—like the one put out on Tuesday by US State Department spokesperson Jen Psaki—focused more on limiting Compaoré’s tenure than what might follow in his wake, have not really begun to contemplate.

First, for all of his faults and the unfortunate associations of his early years in power (including with the likes of Libya’s Muammar Gaddafi and Liberia’s Charles Taylor, which I chronicled more than a decade ago in my books on the civil wars in Liberia and Sierra Leone), Blaise Compaoré had matured into something of an elder statesman of West Africa, delivering solid progress at home and contributing significantly to regional security and peacemaking (even hosting a major hub for US surveillance of activities by al-Qaeda’s regional affiliate as well as the French forces leading an anti-terrorism effort across the Sahel), as I detailed just three months ago. In his remarks at an Atlantic Council-hosted event at the margins of the US-Africa Leaders Summit in August, Compaoré renewed his support for a robust security partnership with the United States and its allies. Now, just as Mali continues to battle Islamist militants, Niger faces pressure from the continuing disintegration of Libya, and Nigeria reels from Boko Haram’s continued onslaughts, Burkina Faso, a linchpin of regional security, teeters at the brink. And, of course, the extralegal removal of a head of state before his term expires would result in the country’s suspension from the African Union and the Economic Community of West African States (a communiqué from ECOWAS explicitly warned that the regional body would “not recognize any ascension to power through non-constitutional means”) as well as the cut-off of military cooperation by the United States and other countries—effectively putting the country beyond the pale of the international community until constitutional order is restored.

Second, mob rule is the form of government least likely to achieve positive internal political outcomes for any country. While it is one thing to demonstrate against a proposal to allow the incumbent to extend his tenure beyond the previously existent limits—and, in fact, the African Union Charter on Democracy and Good Governance has stipulations against the practice—it is another thing to drive him or her from office before the end of his or her term without even a nod to constitutional norms. By what right does a frenzied mob of looters (or a cabal of uniformed officers) claim to “represent” millions of other people?

Third, were Compaoré driven out before his current term ends, not only would Burkina Faso’s international partners likely suspend non-humanitarian assistance (and dash any hopes of a second edition of Burkina Faso’s highly-praised $480 million Millennium Challenge Compact), but investors who have slowly, but steadily, trickled into the country during the long years of stability provided by Compaoré will likely flee—or at least the ones who can will (mining companies that have made the country Africa’s fourth-largest gold producer would have to try to weather the storm, but forget about any new projects). It is hard enough to attract business to a landlocked African country at the edge of the desert without YouTube clips of riotous mobs running amok through government and commercial edifices. It will take considerable effort for Burkina Faso to recover from the damage which the violent demonstrations of the last week and the overthrow of the country’s government have wreaked on its reputation. The unemployed urban youth who spearheaded many of this week’s attacks are, tragically enough, going to be among the first to suffer from any decline of an already difficult economic landscape.

Fourth, a politically- and militarily-isolated Burkina Faso facing further economic marginalization would not only be unable serve as the geopolitical anchor of the Sahel region, but would also itself quickly become vulnerable to the very terrorist and criminal networks that it had so long helped to combat. Instead, a Burkina Faso that is prostrate could open a pathway for militants and criminals in the Sahel to penetrate southward to more economically buoyant countries like Ghana and Côte d’Ivoire.

There is a proverb frequently quoted among the Burkinabè that says he who burns down a house soon learns why ashes cost a fortune. Alas, if Burkina Faso descends into chaos, it will not only be the mobs that literally set Ouagadougou on fire this week that would soon be finding out the price of bitter ashes, but likely an entire swathe of Africa.