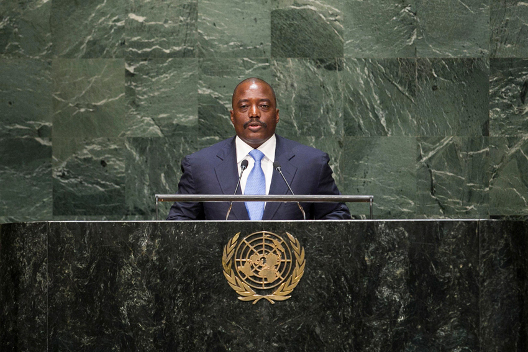 The incumbent regime ruling the rather ironically-named Democratic Republic of the Congo (DRC) continues to narrow the political space in the country as it approaches elections which are supposed to be held next year, going so far this past weekend as to arrest a US diplomat who was detained along with other participants at a press conference organized by pro-democracy activists.

According to a report by Reuters, the diplomat, whom was subsequently identified as Kevin Sturr, director of the US Agency for International Development (USAID) program on democracy, rights, and governance attached to the US embassy in the Congolese capital of Kinshasa, was rounded up along with pro-democracy activists, journalists, and musicians when soldiers stormed into a press conference at a cultural center. The event was held as part of the visit to the city of members of a Senegalese collective of journalists and rappers, Y’en a Marre (“Fed Up”), that had played a key role in defeating the attempt by then-President Abdoulaye Wade to win a third term in 2012, as well as representatives of Balai Citoyen (“Citizen’s Broom”), a grassroots movement from Burkina Faso which helped galvanize opposition to longtime President Blaise Compaoré’s attempt to extend his rule in that country. The Senegalese and Burkinabè delegations had come to meet with Congolese civil society and were hosted by Filimbi (“Whistle”), a local nongovernmental organization that encourages youth participation in politics.

According to a statement released by the US embassy, the event interrupted by authorities, a press conference to be followed by a concert, was “one of many activities the U.S. government supports that involve youth and civil society as part of our broader commitment to encourage a range of voices to be heard. These well-known, well-regarded, non-partisan youth groups as well as the organizers of the weekend’s events intended to promote Congolese youth participation in the political process and encourage young people to express their views about issues of concern to them.” Because of diplomatic immunity, Mr. Sturr was released to embassy officials overnight, but others detained with him—including three French journalists and a Congolese stringer for the BBC—were not so fortunate and were still being held by Congolese officials. The spokesman for the regime told Agence France-Presse that those arrested were “preparing acts of violence” and were conspiring to “destabilize” the country. Specifically, the Senegalese and Burkinabè were accused of “having come not for conferences but to foment hostile acts between Congolese groups.” The charges were especially ironic given that at a conference the day before they were arrested, the African activists repeatedly insisted on nonviolence.

Of course, none of this comes as much of a surprise. DRC’s President Joseph Kabila inherited power from his father, an adventurer who seized power amid the collapse of longtime dictator Mobuto Sese Seko’s rule only to be assassinated by his own bodyguard in 2001. Kabila fils was subsequently proclaimed the winner of elections in 2006 and 2011—the latter result denounced as “treachery, lies, and terror” by the country’s Roman Catholic bishops—but faces an absolute constitutional bar against seeking a third consecutive term (the charter explicitly states that the limit on presidential terms is not subject to “any constitutional revision,” unlike other provisions that may be amended according to a stipulated process). The problem for the Congolese ruler is that if he were to respect the constitution he himself promulgated and give up power, he would face literally a lifetime—he is currently only forty-three years-old, having come to power before he was even thirty—of looking over his shoulder for potential war crimes and other prosecutions for the rather poor human rights record of his regime, to say nothing of its economic mismanagement of what is one of the richest countries in the world in terms of natural resources. Just two months ago, proposed changes in the country’s electoral law which opposition political parties and civil society groups denounced as a ploy to extend the president’s rule were dropped following mass protests in which at least forty people were killed by security forces.

Last week, the Atlantic Council’s Africa Center hosted a high-level roundtable discussion with former Congolese parliamentary speaker Vital Kamerhe and two parliamentary deputies, Samy Badibanga Ntita, chairman of the Union for Democracy and Social Progress, the largest opposition bloc in the National Assembly, and Jean Lucien Bussa Tongba, leader of the opposition Current of Democratic Renewers. All three leaders pressed for continued robust US and European engagement to ensure that the democratic transition in DRC has a chance. This weekend’s ham-fisted attempt to squash a modest gathering of civil society activists underscores just how big of a challenge this will be.