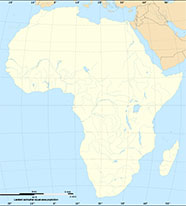 If one country has benefited from American and European neglected of Africa over the past decade or so, it has been China. In the absence of significant American and European investment on the African continent, particularly below the Sahara, China’s trade with the area increased, between 2001 and 2011, from $20 billion to $120 billion.

The business probably benefits China more than its African trading partners, given that the Asian superpower tends to purchase raw materials, repatriate profits, and leave behind relatively little in the way of infrastructure and industry investment. Nor does China make any pretext of supporting political reform in countries where authoritarianism, human rights abuse, and corruption reign. To the contrary, Beijing is probably quite content with the way these countries are run right now.

But meanwhile, festering political strife on the continent has played into the hands of extremist groups. While the Qaeda-affiliated Al-Shabab movement in Somalia is politically weaker than in the past, it still has the capacity to great harm, and is extending its reach into Kenya and stoking a new wave of sectarian violence. In northern Nigeria, the radical Islamist Boko Haram group is still holding 200 girls hostage, while continuing to attack army and government installations and targeting the Christian minority in the north. Their goal remains an independent “Northern Nigeria” under hardline Sharia rule.

In the African Sahel, the collapse of Gaddafi’s Libya has enabled armed groups to amass great stockpiles of leftover weapons. With the exception of Algeria today, all the countries in the area are now government by Islamists — and while Salafis still have not attained political power, Brotherhood-affiliated political elites have proven largely unable to contain them.

It’s time for the Obama administration to wake up and show leadership in Africa. Fortunately for the continent, there are some encouraging signs that it is beginning to do so.

But they are only a piece of the puzzle. To preempt the deterioration of security on the continent, it is also vital to support good governance. Since the beginning of this year, some statements by Administration officials have conveyed encouraging signs of an American sense of responsibility toward the continent, its democratic development, and human rights conditions. In early May during a speech in Addis Ababa, for example, Secretary of State John Kerry noted that the threat of violence or all-out war in some of the continents flashpoints could “prevent even the first shoots of prosperity from emerging …” and called on Africans to “bend the arc of history towards reform, not retribution; towards peace and prosperity, not revenge and resentment.”

When Kerry visited the Democratic Republic of Congo, questions were raised as to whether he would press President Joseph Kabila, increasingly manifesting dictatorial tendencies, to depart the presidency at the end of 2016 as called for in the Congolese constitution.

On the one hand, Kerry indicated that he did not believe Kabila would seek a third term in 2016: “I think [ Kabila ] clearly has in mind the fact that the United States of America are deeply convinced that the constitutional process must be respected … The DRC I think is stronger when its people have respect for their nation and government, and when the constitutional process is implemented properly.” While acknowledging that Joseph Kabila is ” … a young man who can still contribute to development in his country,” the chief U.S. diplomat insisted on free, fair and transparent elections on time and in compliance with the current Congolese Constitution. Congolese opposition and civil society certainly hope Kerry’s words will be heeded — and have sent Kerry a memorandum to this effect.

On the other hand, Russell Feingold, Special Envoy for the Great Lakes and DRC, made statements suggesting that the United States was more worried that Kabila would continue his rule past his constitutional mandate. “Africa does not need strongmen,” he said, “but strong institutions.” He went on to acknowledge that “the international community had not engaged early enough as it should … [W]e should not repeat that mistake in 2016.” And in a sign of that commitment, Kerry announced the immediate release of $30 million in additional funding to support transparency and credible elections, as well as reconstruction programs in eastern Congo. “Military force alone will not bring stability in the DRC,” he said — and called for the reintegration of Congolese rebels who lay down their arms. And the State Department also indicated that Washington would support such an effort to the tune of $100 million.

Thousands of Congolese took to the streets to celebrate Kerry’s visit, having formed the impression that the United States might at last become an arsenal of support for democracy in their country. Ensuring that their hopes are not dashed would be a victory for Africa and a victory for the United States. Numerous children born in the country that day were baptized with the name Kerry.

During his second official visit to sub-Saharan Africa in 2013 , President Obama announced that he would host African leaders at a summit in Washington in 2014. The President’s announcement was met with enthusiasm by many analysts who in the past had seen the U.S. Africa policy under the Obama administration as lacking clear direction or creativity. On January 21, 2014, the White House officially announced the dates of the meeting: August 5-6 , 2014.

The summit could mark a turning point in US- Africa relations, and show the world that the U.S. is committed to playing a role in developing a democratic, stable, and prosperous continent.

Ahmed Charai is publisher of the Moroccan weekly news magazine L’Observateur; chairman and CEO of MED Radio national network; and chairman of the daily newspaper Al-Ahdath al-Maghrebiya. In the United States, he sits on the board of directors of the Atlantic Council and the board of trustees of the Center for Strategic and International Studies, as well as the boards of trustees of the Foreign Policy Research Institute and the National Interest.