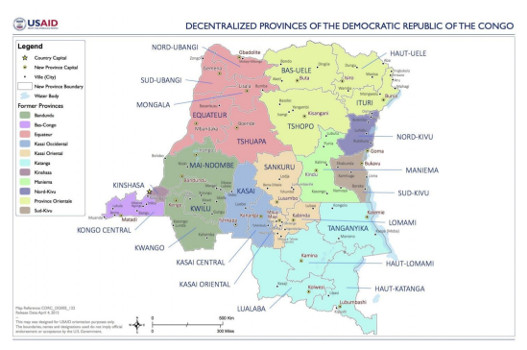 In power for more than a decade and a half with precious little to show for it and yet facing the possibility of a one-way ticket to the International Criminal Court at The Hague should he ever yield the presidency, it is no wonder that Joseph Kabila of the Democratic Republic of the Congo (DRC) is desperate to cling on to his current job, despite being term-limited by the constitution he himself promulgated in 2006. Blocked by the plain text of the law, which admits no modification, he tried to delay next year’s elections by legislating a census—an exercise that could take years in the country as large and poorly connected as the DRC—be completed before the elections, but was frustrated when the upper house of parliament demurred following nationwide protests that left more than three dozen people dead. Now, the ruler has apparently hit upon a new scheme.

A Washington Post blog piece earlier today by political scientists Guy Grossman and Janet Lewis points to what may be happening when it matter-of-factly reports:

[P]lans are underway to divide [the Congo’s] existing 11 provinces into 26. Known in the DRC as découpage, this policy was mandated in the new 2006 constitution, but has yet to be carried out. Incumbent President Joseph Kabila has set a June 30 deadline for finally implementing découpage.

What the two scholars do not address is what are the consequences of decoupage and, given that Kabila is hardly known for his fidelity to either the letter or the spirit of the law, what is behind the regime’s newfound urgency to implement a provision that it has hitherto paid no attention to? There are several possible explanations, none of which have anything to do with either good governance or legality, but all of which have everything to do with holding on to power.

First, the proposed redrawing of the DRC’s internal political map includes the breaking up of several large provinces with powerful governors who might challenge the incumbent. For example, mineral-rich Katanga, in the southeastern part of the Congo, would be split into no fewer than four new provinces: Lualaba, Haut-Lomami, Haut-Katanga, and Tanganyika. The division would also put Katanga’s governor, Moïse Katumbi, one of the more charismatic leaders on the Congolese political scene, out of a job. And Katumbi would have a compelling record of achievement to run on if he chooses to take on the lackluster Kabila. During his tenure as governor, in addition to the minimum salary requirements he imposed on their operations, he forced mining companies to make insignificant investments in the province as a condition for exploiting its natural resources, policies which made him enormously popular with ordinary citizens in the province. Increased revenues at the provincial level were also invested in the province itself, including in education, where the number of elementary school students has tripled since Katumbi became governor in 2007.

Second, as Congolese commentators have noted, the effort and cost, human and material, of setting up the new provinces and their various subdivisions will inevitably overwhelm the already anemic administrative capacity of the country’s government, leaving very little scope—or money—to organize the local and municipal elections that are supposed to take place as a prelude to the presidential election less than eighteen months from now. The excuse is already being prepared for the failure to hold the local polls: “It’s not that we don’t want to hold elections, but we can’t afford them.” After that, it will undoubtedly be asserted that the presidential vote cannot take place until elected local officials are in place and, before too long…Voila! Kabila gets a de facto extension of his term.

Third, while there are some arguments to be made for decentralizing government in the DRC and devolving authority to levels of government most attune and potentially responsive to the needs of the people, there is a difference between decentralization and balkanization, a great deal of which has to do with intentions. If local autonomy were the motivation, one would have seen greater adherence to the constitution’s requirement that 40 percent of revenues be turned over to the existing provinces. In fact, it is apparent that the real motivation is to create a raft of smaller entities even more dependent on the power of the center.

Up to now, various world leaders, including President Barack Obama who called Kabila two months ago to specifically emphasize the importance of timely, credible, and peaceful elections, have focused on the two-term limit explicitly laid out in the Congolese constitution. Apparently, the international community also needs to watch out for the schemes which have been and will be hatched to do an end run around these constraints on the ambitions of the DRC’s ruler.

Image: A map of the current and proposed political boundaries. This map outlines the proposed division of provinces in the Democratic Republic of the Congo (DRC) and the current administrative breakdown. (Winock Monsengo/USAID-DRC accessed on http://www.washingtonpost.com)