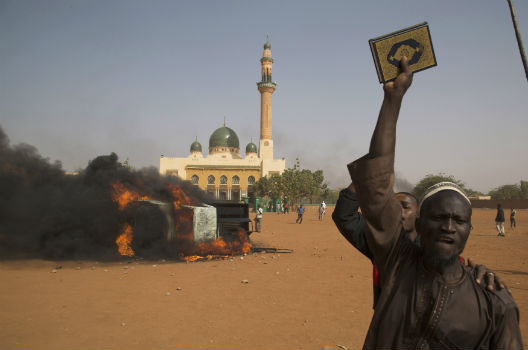 A man holds a copy of the Koran during a protest against Niger President Mahamadou Issoufou's attendance at a Paris rally in support of French satirical weekly Charlie Hebdo, which featured a cartoon of the Prophet Mohammad as the cover, in Niamey January 17, 2015. REUTERS/Tagaza Djibo

Violent riots broke out in Niger last month following the depiction of the Prophet Muhammad on the cover of the French satirical weekly newspaper Charlie Hebdo. Ten people were killed and forty-five churches torched by protesters on January 16 and 17. Niger declared three days of mourning.

The depiction shocked the majority of Nigeriens, more than 90 percent of whom are Muslims. Many were further angered by President Mahamadou Issoufou’s attendance at the January 11 solidarity march in Paris. Hearing the President say “We are all Charlie” on French networks triggered an outcry in local communities and mosques. The Imam of the Great Mosque of Niamey who also went to Paris with President Issoufou faced protests while preparing to lead the Friday prayers after his return and the President had to deliver an address on national radio and television to allay tensions.

Stronger communication with Nigeriens before the President traveled to Paris might have helped them better understand that “We are all Charlie” was not endorsing caricatures of Islam, but was rather a repudiation of terrorism and an expression of support for freedom of speech.

Of course, there is no actual link between an irreverent French weekly and Nigerien churches—Pope Francis even condemned Charlie Hebdo’s depiction of Muhammad—yet protesters attacked the churches as symbols of Western religion and values. But the riots were also fueled by other difficulties afflicting Niger: regional insecurity, challenging demographic trends, and a lack of opportunities for its young people.

Niger, a landlocked country, has three neighbors—Mali, Nigeria, and Libya—that are facing profound insecurity, the spillover effects of which are affecting Nigerien society and national security.

AQIM in Mali
To Niger’s west, Mali is fighting al Qaeda in the Islamic Maghreb (AQIM), which in 2012 captured swathes of the country’s north and was moving to grab more before a French intervention drove it back. Previously, in 2010, the group attacked the uranium mines at Arlit in northwestern Niger and kidnapped eight foreign workers; in 2011, the group broke into the capital Niamey and kidnapped two French tourists in a restaurant.

The Boko Haram Threat
To the south, Boko Haram’s progress in Nigeria is of deep concern. Cities recently attacked by the militants are close to the border between the two countries (Maiduguri and Baga are less than 150 miles from Niger), raising the possibility Boko Haram may stage incursions into Niger soon. The government has responded by mobilizing around 3,000 soldiers to guard the border.

According to Nigerien officials, approximately 90,000 refugees have fled Boko Haram violence into the Diffa region of eastern Niger, straining local communities that are facing a food crisis due to droughts and floods in 2012 and 2013; about 53 percent of the population in the Diffa region are food insecure while 23 percent are facing severe malnutrition. In December 2014, the government made an urgent appeal for international aid to tackle the humanitarian crisis brought on by the refugee influx.

Officials from Diffa also expressed concerns regarding unemployed youths leaving town to join Boko Haram for money. The group reportedly offers 300,000 West African CFA francs (approx. $580) to its recruits, which is an important amount in the region. Officials from the Diffa region urged the government to take measures to address youth unemployment and prevent a drain of youth to Boko Haram.

The End of the Qaddafi regime
In 2011, President Issoufou publicly objected to the international military campaign that unseated Libyan President Muammar Qaddafi, pointing out the risk of chaos in the region should Qaddafi fall. He was proved correct. The disintegration of the Qaddafi regime in 2011 saw around 200,000 Nigeriens return home, resulting in a drastic reduction in remittances from Libya and putting considerable financial pressure on communities and households already weakened by a drop in agricultural production.

As with the Nigerian conflict to Niger’s south, the Libyan situation has put regional security at risk, leading President Issoufou to call for international action to address the crisis. Niger has suffered directly from Qaddafi’s ouster: on May 23, 2013, groups linked to AQIM launched twin attacks on the northern cities of Arlit and Agadez, and President Issoufou accused the assailants of coming from southern Libya. More recently, on October 10, 2014, French soldiers participating in Operation Barkhane, a French-led multinational counterterrorism force that covers the Sahel region, destroyed a jihadist convoy crossing Niger from southern Libya to reach Mali and recovered three tons of weapons and ammunition.

France is assisting Niger by strengthening and equipping the Nigerien military fort in Madama, sixty-two miles from the Libyan border. The fort is the perfect location to control the Tummo and Salvador passes, the latter of which is a strategic crossing to the area where the borders of Libya, Niger, and Algeria converge and acts as a bottleneck for smugglers and jihadists transiting from Libya to Northern Mali.

Demographics and a Lack of Opportunity

Fast-Growing Population
One watching the Charlie Hebdo protests in Niger would notice the fairly young age of the protesters, and for good reason; Niger has the lowest median age on the planet at 15.1 years (versus 46.1 for Japan and 37.6 for the United States), which means that almost half the population is below fifteen years old. Nineteen percent of the population is between fifteen and twenty-four.

Niger’s youth is a result of the highest fertility rate in the world—7.6 children per woman—that has led to a ballooning population. Between 1950 and 2015 Niger grew from two million citizens to around seventeen million, and is projected to reach about fifty-four million by 2050. Unless social programs (e.g., women’s education, vocational training) are strengthened, this high population growth will continue to be a drag on Niger’s development and poverty reduction efforts, something it can ill-afford as the country is ranked last in the United Nations Human Development Index.

Education and Employment
Despite improvements, the Nigerien education system lacks the capacity to educate all of Niger’s large youth population. The number of girls completing primary schooling in Niger increased from 36 percent in 2007 to 42.6 percent in 2011, but that still leaves more than half without access, while 40 percent of boys do not attend primary school.

Niger’s inadequate education system and high population growth makes it impossible for the country to create enough jobs for its youth; as a result, around 60 percent of Niger’s economic activity takes place in the informal sector. The formal sector, with the exception of some niche markets, is too disconnected from the global economy and limited in terms of opportunity for growth, and will not be able to provide the missing jobs.

All of these factors—regional insecurity and the increased strain on fragile communities it brings, the population boom, and low education and employment rates—contributed to the frustration that fueled January’s violence. The authorities are quite cognizant of the challenges. In 2012, President Issoufou launched the country’s poverty reduction strategy, the Plan for Economic and Social Development (PDES) for 2012-2015. This $10 billion strategy includes strengthening public institutions, enhancing the agricultural sector, and diversifying the economy. Out of the $10 billion, $8.3 billion is meant to be financed through external funds. Niger managed to secure donors’ pledges for about $4.8 billion which leaves a gap of about $3.5 billion to be filled.

Regional insecurity is another challenge to the PDES. Its increasingly precarious neighborhood compelled the Nigerien government in fall 2012 to add the Strategy for Development and Security (SDS) to the PDES to tackle the security issue. The SDS is a $2.5 billion plan for the northern desert areas, to which the government will contribute half the total cost.

President Issoufou has repeatedly called for substantial support to strengthen Niger’s capacity to tackle its security challenges and achieve its development objectives. The recent domestic unrest tells us that more attention should be paid to the country’s needs if we want to win the battle in the Sahel.

Abdoul Salam Bello is a senior fellow at the Africa Center.