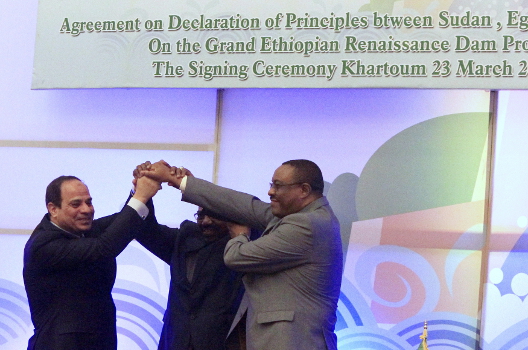 Amid the attention recently focused on the Nigerian presidential election and the resulting democratic transition in Africa’s most populous country as well as on the brutal al-Shabaab terrorist attack on Kenya’s Garissa University College, an equally momentous event that took place at roughly the same time passed relatively unremarked. On March 23, the leaders of Egypt, Ethiopia, and Sudan met in the Sudanese capital of Khartoum and reached an historic agreement on principles that opens the way for broad regional cooperation on the use of the waters of the Nile River. The accord, signed by President Abdel Fattah el-Sisi of Egypt, Prime Minister Hailemariam Desalegn of Ethiopia, and President Umar al-Bashir of Sudan, has the potential to transform a longstanding dispute over the Nile and the brewing conflict over Africa’s largest hydropower project into an opportunity for collaboration and development in a corner of the continent much in need of both.

The Nile is the longest river in the world, with a length of over 6,650 kilometers from its remotest source in Burundi’s Ruvyironza (Luvironza) River. Most of the water flowing through the great lakes of equatorial Africa to eventually form the White Nile is lost to evaporation in the Sudd, the vast swamp of southern Sudan. Thus by the time it joins the Blue Nile at Khartoum, the White Nile contributes barely 10 percent of the total flow. Together, the shorter Blue Nile, whose remotest source is the Felege Ghion spring venerated by the Ethiopian Orthodox Tewahedo Church, and the Nile’s other major tributary, the Atbara River, which likewise originates in the heart of the Ethiopian highlands near Lake Tana, account for nearly 90 percent of the water and over 95 percent of the sediment carried by the Nile proper. The combined drainage basin of these river systems covers one-tenth of the area of the African continent.

While the Nile has provided for the livelihoods of the peoples along its banks from time immemorial, rapidly expanding population (the slightly more than 400 million people who live in the river basin are expected to double in number by 2025) combined with industrialization and urbanization—to say nothing of the effects of climate change on Africa—will place unprecedented demands on the river’s fixed supply of water. This, in turn, has increased tensions between the eleven independent countries in the Nile Basin—Burundi, the Democratic Republic of the Congo, Egypt, Eritrea, Ethiopia, Kenya, Rwanda, South Sudan, Sudan, Tanzania, and Uganda—which together constitute the largest number of sovereign states in any river basin in the world. Each of these states has a distinct interest in the river’s waters as well as varying capacities to exploit the resource. The Egyptians, for example, rely on the river for more than 97 percent of their freshwater; as the late historian Robert O. Collins noted, “Without the annual flood of the Nile waters cascading down, Egypt would consist of only sand and rock and wind.”

In this context, the construction of the Grand Ethiopian Renaissance Dam (GERD) on the Blue Nile about 15 kilometers upstream from the Sudanese border, was understandably a source of concern for Sudan and, most especially, Egypt. When completed two years from now, the 1,800-meter-long, 170-meter-high dam will be the largest in Africa and eventually generate some 6,000 megawatts of power. The benefits offered by the GERD in terms of clean electrical power which would not only be consumed in Ethiopia, but possibly exported to nearby countries, including Sudan and maybe even Egypt, are undeniable, as are other upsides, including reduction of sedimentation and prevention of damage to riverbanks during periods of over-flooding. Nevertheless, the two downstream countries also feared both a temporary reduction in water availability during the filling of the dam and a permanent reduction because of evaporation from the GERD’s reservoir. The GERD could also lower the reservoir of Lake Nasser behind Egypt’s Aswan High Dam if floodwaters are permanently restored in Ethiopia, thus marginally lowering Egypt’s own hydropower potential.

Thus, as I noted during Congressional testimony two years ago, it was not surprising that during what turned out to be his last days in office, Egypt’s Islamist President Mohamed Morsi tried to revive his sagging popularity by overheated rhetoric and even threats of violence against the dam and its builders. Since Morsi’s removal, however, Egypt under Sisi has struck a more balanced tone, not only encouraging increased trade and investment with the rest of Africa and preparing for the launch next month of a free-trade area embracing twenty-six African countries, but quietly opening the talks that led to the recent agreement. The negotiations, pushed along by the Sudanese who, while junior beneficiary with Egypt under previous agreements, also saw the benefits of the GERD, began in late 2013 after Sisi came to power and went on for over a year and a half, aided by the recommendations of an international panel of experts on the hydropower project.

The principles of the agreement reached included the fair use of waters, undertaking not to damage the interests of other states, and a mechanism to peacefully resolve eventual disputes. At the signing ceremony in Khartoum, Ethiopia’s Hailemariam declared that “the construction of the Renaissance Dam will not cause any damage to our three states and especially to the Egyptian people,” while Egypt’s Sisi affirmed that “we have chosen cooperation, and to trust one another for the sake of development.” After signing the accord, the Egyptian leader traveled on to Addis Ababa where he gave a historic address to the Ethiopian parliament during which he told the lawmakers, “Egypt wants to turn the page in the history of relations between the two countries and establish a basis for mutual interest…Let’s put aside the issues we have with each other. We need to work on joint responsibility.”

Time will tell whether these commendable sentiments can be translated into real change of course, but, as I argued previously, it behooves the United States to encourage two of its most important partners in Africa—Egypt and Ethiopia—to work together. And it does not hurt that Sudan, a nation with which the United States could improve relations, is also involved in the improved comity. In this new dynamic, there are significant opportunities for US diplomacy and American private-sector firms to help the countries along the Nile to work together to develop the river basin as a whole. Such engagement would not only be the right thing to do by the peoples of the region, but also be advantageous to the nation’s own interests in Africa as well as its global leadership.