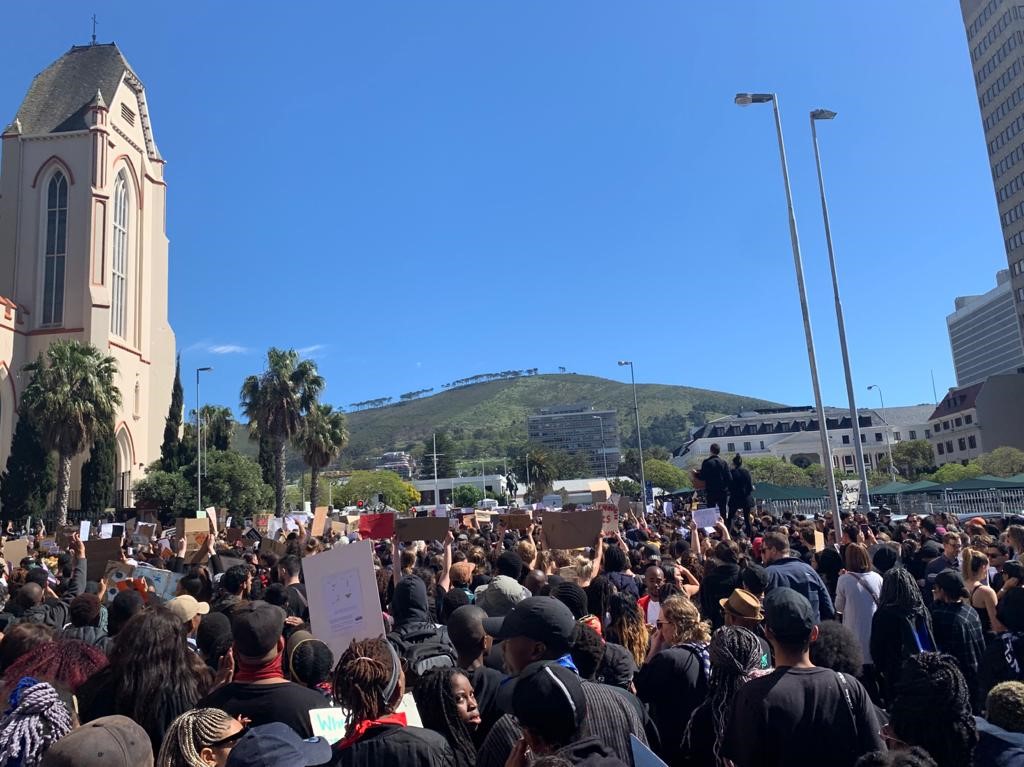 South Africa is one of several nations facing an international outcry over increases in COVID-19 related violence against civilians by security forces enforcing quarantine measures. Since South Africa instituted a country-wide lockdown on March 27, the number of violent incidents by police against civilians has reportedly more than doubled, with poor and vulnerable populations most affected. (For reference, conflict data tracking website ACLED reports that in the two months prior to lockdown, approximately twelve “violence against civilians” events were recorded; in the two months following it, the number rose to nearly thirty.)

As restrictions start to ease and the country begins its reopening, the number of COVID-19 cases in South Africa has been lower than many initial projections. During a June 17 press conference, President Ramaphosa announced that there have been 80,412 confirmed coronavirus cases in South Africa. Of these, 44,331 people (around 55 percent) have already recovered, and 1,674 people have died in the developing country of nearly 60 million. This has prompted many to praise the lockdown measures for flattening the country’s curve. However, questions surrounding the steep human rights costs of the lockdown are emerging country-and world-wide.

Under initial drastic regulations that began March 26 (Level 5 of South Africa’s 5-tiered plan), citizens were under a strict curfew and shelter-in-place orders and were prohibited from leaving their homes for anything other than essential trips to the grocery store, pharmacy, or hospital. Any outdoor exercise, interprovincial travel, and even the sale of alcohol and cigarettes was prohibited countrywide. The enforcement of these stringent policies came with an initial mobilization of nearly 3,000 soldiers, deployed overwhelmingly to informal settlements known as townships. Heavy fines for breaking the law were also implemented. To enforce the quarantine orders, Police Minister Bheki Cele set up more than 190 roadblocks and over 680 vehicle checkpoints across the country, encouraging security forces to “destroy” any stores selling liquor and authorizing the use of force to enforce the ban.

For the millions of poor South Africans working and living in the informal sector, the country’s quarantine mandates have presented an impossible challenge. Faced with persistent food and income insecurity, and dwelling in informal settlements lacking basic hygiene facilities including running water and toilets, millions of under-resourced South African households have been simply unable to heed the government’s COVID-19 regulations. As hunger and despair mounted and promised public aid was not delivered, unrest across the country began escalating.

Within the first seven days of lockdown, security forces had arrested more than 2,000 people for quarantine-related infractions. The first reports of looting and public protests over the lack of service deliveries broke towards the end of April—about a month after the Level 5 lockdown started—and on April 21, President Ramaphosa announced the deployment of an additional 73,180 South African National Defence Force (SANDF) troops to help with enforcement. The move was unprecedented: the “largest deployment of SANDF troops” in post-democratic South Africa, best understood when put into context with 2017 figures that list the total (visible) number of police officers in the country at 102,059.

As of June 1, over 230,000 people had been arrested. Most have been due to minor violations, including being outdoors without a permit or possessing alcohol and/or cigarettes. The deployment of troops has prompted outcries from civil society and the UN, who warned that excessive policing and the potentially deadly risks associated with the enforcement of harsh lockdowns and curfews could “spark a human rights disaster.”

South Africa suffers from deep-seated inequality and is consistently ranked as one of the least safe and most violent countries in the world. In particular, both public and private South African security forces have had long, documented histories of brutality, racially-biased policing, and excessive use of force, in part due to the legacy of the apartheid-era militias. However, when the county’s lockdown measures were implemented, two interesting trends related to violence emerged. The first was an overall decrease in most types of violent activity. March’s murders were down by 72 percent when compared to the previous year; assaults fell by 85 percent; and violent robbery by 70 percent. The country’s ban on alcohol appears also to have had a significant effect on the emptying of hospital beds and decreasing crime overall, 40 percent of which is related to alcohol. However, while violence decreased in general, a specific type of violence escalated dramatically: violence against civilians by security forces.

Within weeks following the lockdown, photos and videos began circulating on social media, depicting various security sector forces (allegedly) using aggressive force and brutality in townships against even minor lockdown infractions. In Alexandra, a township outside Johannesburg, South African Police Services (SAPS) used water cannons and rubber bullets to disperse people peacefully queuing outside food shops. The use of tear gas on protesters and the shooting of rubber bullets into groups of people has been reported across the country. At least ten South Africans (all Black) have already died in police action during the lockdown. As the spotlight is turned on police brutality worldwide, the names and stories of these victims continue to emerge in the South African news media.

One such example is the online and in-person protests over the death of Collins Khosa. Khosa was found to have died from blunt force trauma to the head after SANDF entered his home and violently detained him, suspecting he had cups of alcohol in his front yard. The family’s court filing against the officers—who denied all charges—stated that Khosa was strangled, slammed against a cement wall and a steel gate, and then hit with the butt of a machine gun. Afterwards, the family reported that he could not walk, began to vomit, and lost speech. When his partner tried to wake him a few hours later, he was unconscious.

Township resident Sibusio Amos was another victim of police brutality after he was found drinking in an informal bar, violating government regulations. Police used rubber bullets to remove him and other patrons from the shebeen, then allegedly followed him home and fatally shot him on his veranda. Several children were caught in the crossfire and had to be taken to the hospital. While Khosa’s death and the clearing of the involved SANDF officers are the subject of ongoing investigations into police brutality by the Independent Police Investigation Directorate (IPID), other deaths including Amos’ remain uninvestigated. The South African government has issued a statement condemning the alleged police misconduct.

South Africa is not alone in this alarming trend of heavy-handed pandemic policing in Africa. A Kenyan policing oversight body alleges that police have killed fifteen Kenyans since the government imposed its dusk-to-dawn curfew, part of a wider set of government-imposed coronavirus measures. The Independent Policing Oversight Body (IPOB) states that as of June 5,  it had received eighty-seven complaints against the police, including harassment, assaults, inhumane treatment, sexual assault, shootings, and death. Protests against what some Kenyans feel like is unpunished police brutality broke out on June 1. In Nigeria, security forces are reported to have killed at least twenty-eight civilians, while 873 cases of police brutality had been documented as of April 1.

Longstanding policing challenges in South Africa are being made even more difficult by the current threat of the coronavirus. While the enforcement of aggressive lockdown measures has contributed to limiting the transmission of COVID-19, it has also left at least ten people dead and has criminalized thousands of others. As in Kenya, Nigeria, and even the United States, the threat of police brutality has created a sort of “double pandemic” for poor, predominately Black individuals: that of the virus and of brutality at the hands of the police. As thousands join in on marches and protests from Cape Town to Johannesburg against security sector violence largely targeted at Black communities, it is becoming increasingly apparent that the COVID-19 pandemic has aggravated many deeply rooted structural cleavages and spurred racial tensions. As such, it is likely that post-pandemic South Africa will encounter new trials and tribulations regarding police accountability, transparency, and justice on its long walk to reconciliation.

Katie Trippe is an intern with the Atlantic Council’s Africa Center.

“Coronavirus is mainly a health issue, and our key focus is ensuring that we keep our people safe,” Kenyatta said. “But this is also an economic crisis because it has resulted in some key sectors hugely affected by lockdowns. We were forced to close our airspace, which affected tourism, a very critical part of our economy.”

On Tuesday, June 2, the Africa Center hosted Prof. Benedict Oramah, President and Chairman of the Board of Directors of the African Export-Import Bank (Afreximbank), for a discussion on innovative financing amid COVID-19.

Image: Protests, like the one pictured here at South Africa’s parliament in 2019, have broken out across South Africa in response to security sector violence amid the coronavirus pandemic. (Photo: Katie Trippe)