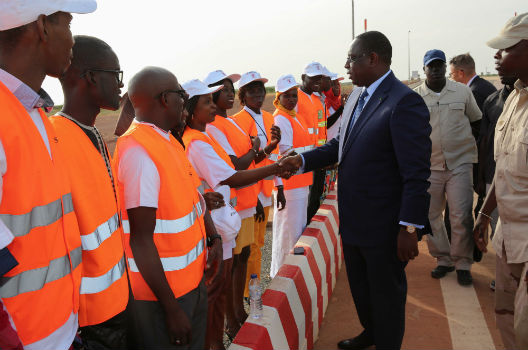 In a region that has too often been plagued by coups, civil wars, and general political strife, Senegal, one of Africa’s oldest democracies, is somewhat of an outlier. This reputation for political stability is further enhanced by the considerable number of multinationals, international organizations, and NGOs that have selected Senegal as the regional centre for their West Africa operations.

Yet despite such evident strengths, Senegal has struggled in its fifty-six years of independence to turn its competitive advantage into any prolonged period of economic success. Hampered by decades of stale investment climate, high energy prices, and cumbersome bureaucracy, the private sector has not yet been able to give the economy the boost it needs to finally take off. In addition, poor management of public resources and general haphazard planning have made it difficult for Senegal to ever build a coherent development strategy.

It is then in the midst of such chronic economic underachievement that in 2013, the freshly elected President Macky Sall endorsed the Plan Sénégal Emergent (PSE), the ambitious national development plan, crafted by the global consulting firm McKinsey, a well-balanced team of local experts, and the cream of Senegal’s prestigious civil service. The Priority Action Plan (PAP) of the PSE comprises twenty-seven flagship projects and seventeen major reforms, covering various sectors such as agriculture, energy, education, health, infrastructure, information communications technology, financial and tourism services. The idea is to increase the country’s productivity in order to grow the gross domestic product (GDP) by an average rate of 8 percent, create six-hundred-thousand formal jobs, and place Senegal on the road to industrialization.

Fast-forward two years after the PSE’s successful launch at a much publicized roundtable with international donors in Paris, Senegal has made significant strides towards achieving emerging-country status by 2035.

The first encouraging signs that the PSE is bearing fruit came early this year when the Senegalese minister of finance proudly announced that the real GDP growth rate had reached 6.5 percent in 2015, a much higher figure than the 5.1 percent previously forecasted. Although vociferously contested by civil society before being confirmed by the International Monetary Fund (IMF), these numbers seem to attest to a steady implementation of the national strategy.

In fact, Senegal has identified macroeconomic and political stability as the backbone of its development policy. In that respect, the government has moved swiftly to negate some of the fiscal excesses of the previous regime by cutting its deficit from 8 percent in 2011 to 4.8 percent in 2015. Estimations predict it will be even lower this year. The inflation rate is also under control, standing at 0.1 percent, much lower than the 3 percent threshold set by the West African Economic and Monetary Union, of which Senegal is a member. The recent good economic performance owes much to the public investment program being implemented, which increased by almost 0.4 percent of GDP and to the government’s prudent current expenditure approach.

Moreover, from the creation of a national anti-corruption office to the reduction of the President’s term from seven to five years, good governance and the promotion of democratic values are at the forefront of the government’s strategy. In line with the PSE’s objectives, Senegal also improved its standing in most attractiveness rankings. Moody’s upgraded its sovereign credit ratings to B1 positive – highlighting the relatively low risk of investing in Senegal – and both Transparency International and the Mo Ibrahim governance index ranked the country in Africa’s top ten.

If it is true that some of the progress witnessed over the last few years is due to exogenous factors such as the low prices of crude oil, of which Senegal is a net importer, many of the projects identified by the PAP are on schedule. Indeed, out of all the actions initially programmed by the PSE, over half are well into their execution phase and more are likely to be added later this year.

One objective of the Plan Sénégal Emergent has been to create a logistical and industrial hub. In that respect, the industrial platform of Diamniadio, a city located 30km from Senegal’s capital, Dakar, and in the vicinity of the new airport, is fast sprouting up and the installation of its neighbouring special economic zone is under study. The government is also looking to begin in earnest the construction of a modern 1500 km long railway line between Dakar and Bamako, the capital city of its landlocked neighbour, Mali, and the rehabilitation of one of Senegal’s most strategic ports is also imminent. The expectation with these infrastructure projects is that, in the face of renewed competition from a rejuvenated Côte d’Ivoire, Senegal will take full advantage of its geographical location to finally win the race to become the gateway to West Africa’s 300-million-person consumer market.

However, despite these achievements, much work remains if the country is to realize the promise of the PSE. In fact, it was only last year that Senegal faced the ignominy of being featured on the IMF’s list of the twenty-five poorest countries in the world, further highlighting the magnitude of the task ahead.

Indeed, many sectors still face sturdy challenges. The energy sector where the price of electricity, at $0.227/KWh, is still almost twice that of Côte d’Ivoire – Senegal’s main West African rival for foreign investment – is one such example. The lack of infrastructure in rural areas and poor access to land will also need immediate attention if it is not to seriously undermine efforts to attract major foreign investment and to create a robust agribusiness industry.

It is then all the more important to accelerate the implementation of structural reforms in order to boost investment, reduce costs and increase output. In that respect, plans to reform the country’s administration whose outdated bureaucratic processes hinder efficiency are already well under way. This now needs to be quickly complemented by land reform, the creation of special economic zones, and human capital development if Senegal’s foreign direct investment rate of 2.1 percent of GDP is to reach the 6-8 percent targeted by the PSE.

In the face of predicted global slowdown, it is all the more imperative for the government of Senegal to also be creative in financing its projects. Authorities in Dakar estimate that two thirds of the PSE projects will be funded by the private sector and international organizations, so to diversify its financing mechanisms, Senegal became the first country in the region to adopt a law on public private partnerships (PPPs). This legislation will allow Senegal to have a structured institutional framework and well-defined procedures when engaging technical partners and private investors. Similarly, President Sall also authorized the creation of a robust financial architecture consisting of a national development bank, a sovereign wealth fund, and a guarantee fund for investment to enable local champions to emerge.

The international development community has also noticed Senegal’s potential in the last few years. Thanks to good results in governance and to the possibilities brought about by the PSE, Senegal was one of the few countries chosen to benefit from a second Millennium Challenge Compact put in place by the US government to deliver development assistance that promotes sound policy reforms and creates new opportunities for economic growth. Senegal will also be the recipient of the Power Africa fund, a US initiative started by President Barack Obama, which aims to improve access to electricity in sub-Saharan Africa.

All in all, it is clear that the PSE’s implementation is in full effect. Yet its biggest victory to date, besides completely rebranding the country, was to develop a coherent strategy that authorities, investors, and the international community alike can refer to when operating in Senegal. The country is of course not out of the woods yet and the bulk of its challenges remain ahead, but for the first time since independence, Senegal can rightly say it has a well-structured plan meet them head-on.

Mayécor Sar is an Atlantic Council Millennium Fellow and a policy advisor at the presidential delivery unit in the Office of the President of Senegal. Follow him at @Mayecorsar