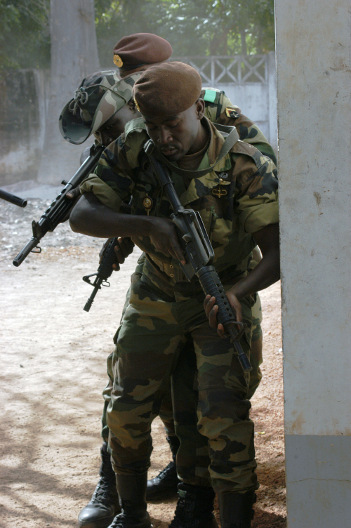 Senegalese soldiers participate in a training exercise. An end to the Casamance conflict presents an opportunity for Senegal to redirect military resources to peacekeeping operations throughout West Africa. (US Marine Corps/Elsa Portillo)

On April 30, the leader of Senegal’s main separatist rebel group, the Mouvement des Forces Démocratiques de Casamance (MFDC,) agreed to a ceasefire and peace talks to end one of Africa’s longest-running civil conflicts, which has sputtered off and on in the country’s southern Casamance region for the last thirty-two years.

The separatist movement poses no existential threat to Senegal – one of Africa’s more stable democracies – but it remains a reputational blemish and has hamstrung economic growth. If successful, the April 30 agreement will provide an opening for the Senegalese government to redevelop the Casamance economy, integrate the region into national politics, and – hopefully – to redirect more of its formidable military resources towards peacekeeping efforts in West Africa.

Overview of the Conflict in the Casamance

Geographically divided from northern Senegal by the Gambia, the Casamance region’s ethnic, religious, and cultural composition is different from the rest of Senegal, and since independence, the southern population has protested the north’s domination of national politics and resources. The MFDC emerged as an armed separatist movement in 1982, and with violence peaking in the 1990s, the United Nations estimates the fighting has killed over 5,000 people, internally displaced over 60,000, and sent tens of thousands into refuge in neighboring Guinea-Bissau and the Gambia. The exodus of refugees has soured regional relations, with Senegal accusing its neighbors of providing refuge and assistance to MFDC rebels for political leverage at various phases.

Over the years, the MFDC has become fragmented, and the lack of centralized command and control has been a barrier to peace. The more militant MFDC factions have consistently been excluded from peace negotiations and, in return, have refused to honor various ceasefires negotiated between the MFDC’s ostensible political leadership and the Senegalese government over the years. In consequence, the Casamance region continues to experience periodic surges of violence as MFDC rebels – whose ranks are estimated at between 1,200 to 2,000 fighters – carry out intermittent attacks on state and military targets, commit theft, and engage in drug trafficking operations.

Though the MFDC rebellion does not threaten Senegal’s stability, the conflict has imposed heavy economic and opportunity costs. Former US State Department “Casamance Adviser,” Ambassador James R. Bullington, emphasized these opportunity costs during his September 2013 farewell speech when he stated the conflict “retards Senegal’s economic development and ties down military forces for peacekeeping missions.”

Senegal is food insecure, burdened with a 48 percent poverty rate, and suffering from sub-par GDP growth (in 2013, it was 3.5 percent, well below regional averages). Exploitation of the Casamance region’s extensive agricultural and tourism potential could add significantly to GDP. The Casamance is blessed with Senegal’s most fertile farmlands, and—if cleared of the landmines and other ordnance that has rendered much of the land unfit for occupation—could be used to grow fruit, vegetables, and rice. Likewise, the region’s white sand beaches were once a prime tourist destination that drew 50,000 visitors a year. The destruction of the tourist industry and the loss of agricultural production have crippled economic development in the Casamance, leaving the region isolated and underserved.

Ongoing insecurity in the Casamance has also prevented the Senegalese government from taking a larger peacekeeping role in West Africa. Under President Macky Sall, Senegal has garnered international goodwill and gained regional diplomatic clout through its willingness to deploy over 2,500 of its military forces – considered among Africa’s most professional – to peacekeeping operations in the Ivory Coast, Guinea-Bissau, Mali, Darfur, and the Democratic Republic of the Congo. But as long as the Casamance conflict continues to sputter on, the Senegalese army will have limited capacity to intervene abroad – making it harder for the United States and its allies to manage the threat of spillover from conflicts in neighboring Mali and throughout the region.

Calling the separatist movement “Senegal’s toughest problem,” Sall made peace in the Casamance a key initiative of his 2012 election platform, and seems genuinely committed to ending the conflict. His willingness to negotiate with an inclusive range of MFDC factions has paid dividends, as have the multiple, youth-oriented development projects his regime has launched in the Casamance. After months of mediation through Sant’Egidio, a Catholic lay organization based in Rome, the leader of the MFDC’s most militant and powerful faction, Salif Sadio, publically agreed to a ceasefire and the commencement of formal peace talks. Government concessions – which included the dropping of charges against key rebel leaders and promises to promote the economic development and political integration of the Casamance region – were key factors in the agreement and increase the odds that the ceasefire will be endorsed across the MFDC movement.

Though the Senegalese government has reached peace agreements with the MFDC before, the latest agreement offers real hope of ending the thirty-two year conflict. Significant challenges remain – overcoming decades of animosity and following through on developmental and political promises won’t be easy – but President Sall seems determined to try. If successful, the Senegalese economy and global security interests throughout the Maghreb-Sahel could reap the benefits.