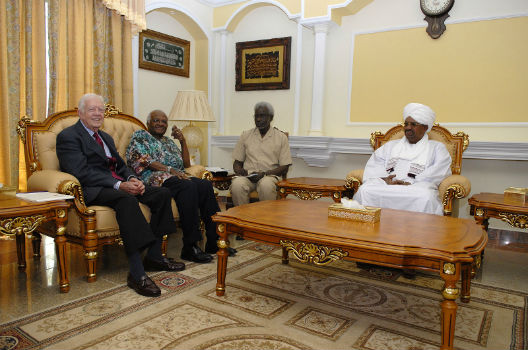 The Secretary of State is required by law to provide the Congress with an annual “full and complete report” on terrorism. The Country Reports on Terrorism covering 2015 was released last week and makes for some interesting reading, its conclusions eliciting reactions ranging from alarm to bemusement to, quite simply, befuddlement. An example of the latter is the country entry on page 301 of the document, which reads in part:

The United States and X worked cooperatively in countering the threat posed by al-Qa’ida and ISIL in 2015, which included their use of transit and facilitation routes within the country.

Given the affirmation by the State Department that the United States “worked cooperatively” with this country to counter the threat posed by both al-Qaeda and the so-called Islamic State, it may be surprising to the reader that the excerpts above are taken from the section of the report for “state sponsors of terrorism”—until, that is, it is learned that country X is the Republic of Sudan, a nation towards which US policy does not always appear consistent, much less rational.

While the US government has a number of open dossiers with its Sudanese counterpart—including legitimate concerns about ongoing violence, humanitarian access, and political space within the African country—these were not the reasons that prompted President Bill Clinton to have Sudan designated a “state sponsor of terrorism” in 1993 and to maintain it subsequently in that category.

The original designation was because of worries at the time about Khartoum’s support for groups like the Abu Nidal Organization (ANO), Palestinian Islamic Jihad, Hamas, and Hizballah. The terrorist Sabri Khalil al-Banna, a.k.a. Abu Nidal, was killed in Baghdad in 2002 and, according to the State Department’s own report, there are no known recent actions by the dead psychopath’s group and, if “ANO associates may still exist in Lebanon, they are likely inactive” (p. 351).  Moreover, while previously members of Hamas were allowed to raise funds, travel, and live in Sudan, by 2015 “the use of Sudan by Palestinian designated terrorist groups appeared to have declined” (p. 301).

The Clinton administration designation was further justified by the use of Sudan as a gathering point for several terrorist groups, including Usama bin Laden’s nascent al-Qaeda, thanks to the welcome extended in the mid-1990s by Hassan al-Turabi, who was speaker of the National Assembly and secretary-general of the National Islamic Front during the period. But al-Turabi lost his government posts after falling out with Sudanese President Omar al-Bashir in 1999 and was even repeatedly in and out prison until his death earlier this year. And the State Department report notes without qualification that “Sudan’s support to al-Qa’ida has ceased.”

Elsewhere in the report (p. 45), the State Department even acknowledges that last year Sudan arrested Aminu Sadiq Ogwuche, the alleged mastermind of the 2014 Boko Haram-linked Nyanya bombing in Abuja that left more than seventy people dead, and extradited him to Nigeria for trial. (Nor was Sudan’s assistance to INTERPOL in tracking down the Nigerian terrorist the only instance of the country’s ongoing cooperation with international law enforcement; just this week Britain’s National Crime Agency credited the Sudanese National Police with helping capture and extradite to Italy one of the world’s most wanted human traffickers, Mered “The General” Medhanie, an Eritrean accused of being behind vessel that sunk off Lampedusa in 2013, killing 359 migrants.)

It might have also added that, since last October, Sudanese troops have been part of the Sunni Arab coalition fighting in Yemen to restore the internationally-recognized government of President Abd Rabuh Mansur Hadi and that Khartoum broke diplomatic relations with Iran and expelled the Iranian ambassador in January of this year.

While US-Sudanese relations have often been difficult in the more than twenty years since the African country was first designated a “state sponsor of terrorism,” it is hard nowadays to convincingly argue that the reasons that motivated that declaration still hold. In fact, last year’s State Department terrorism report even commended Khartoum’s cooperation against terrorist financing in some detail:

In general, the Government of Sudan appeared to oppose the financing of extremist elements… The Central Bank of Sudan and its financial intelligence unit, renamed the Financial Information Unit in late 2014, circulated to financial institutions a list of individuals and entities that have been included on the UN 1267 sanctions committee’s consolidated list, as well as the US government’s lists of terrorist organizations/financiers. The financing of terrorism per UN Resolution 1373 was criminalized in Sudan pursuant to Sudan’s Money Laundering Act of 2003.
The Government of Sudan continued to cooperate with the Financial Action Task Force and took steps to meet international standards in combating money laundering and terrorist financing. In 2014, Sudan adopted a new Anti-Money Laundering and Combating Terrorism Finance Act and ratified the UN Convention Against Corruption. Sudan’s Central Bank officials did not freeze, seize and/or forfeit assets in 2014. Sudan continued to cooperate with the United States in investigating financial crimes related to terrorism.

Ironically, as the earlier report acknowledged in passing, the financial and other restrictions that are part of the sanctions for being a “state sponsor of terrorism” may actually hamper Sudan’s ability to cooperate against terrorism: “The Sudanese government’s ability to monitor illicit finance flows is increasingly hampered by the Sudanese banking sector’s difficulty finding correspondent banks to process international transactions, leading most Sudanese to instead move money in cash.”

America has a number of outstanding issues on which it needs, if anything, to expand its dialogue with Sudan, looking for openings through which to engage both regime interlocutors and representatives of the political opposition, civil society, religious groups, and the private sector. Stubbornly maintaining a nearly generation-old designation whose original justifications have been rendered largely obsolete—if not altogether moot by actual counterterrorism cooperation—seems hardly the most effective way to go about achieving the goals of promoting better mutual understanding and, ultimately, of contributing practical resolutions to pressing domestic and regional conflicts.