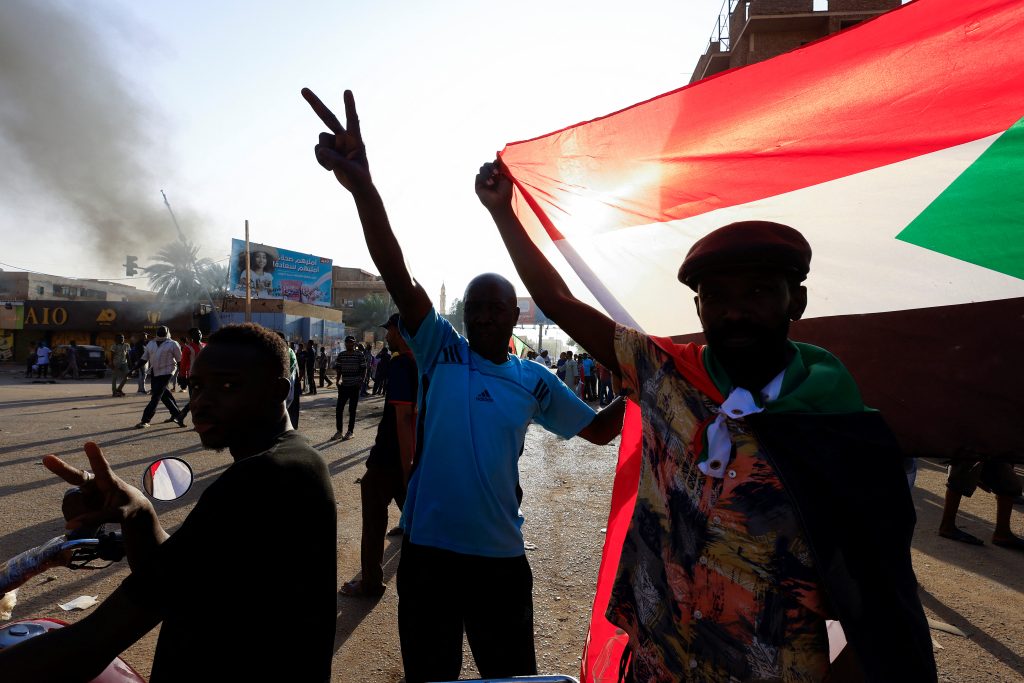 It was only a year ago that Sudan—newly removed from the US terrorism list—was negotiating the terms of its upcoming debt-relief package and proposing ways to invest more than one billion dollars in promised international financial assistance toward propping up democracy. At the time, the world was still talking about the country as a potential model for others to follow on the road from dictatorship to democracy.

Today, the country is on a knife’s edge.

The promised road to reform is now fully blocked by security forces bent on what they claim is an effort to “save” the country from civilian leaders. But as these forces hold ever tighter to power, they are squeezing the life out of the country: Since their October 25 coup that effectively brushed aside the civilian transition and reignited a popular revolution, the economy has gone into a death spiral. Inflation is rising above 250 percent, the value of the country’s currency has plummeted against the dollar, and the price of key imported commodities in Sudan, such as wheat and fuel, have risen by more than 30 percent.

In other words, a loaf of bread that cost two Sudanese pounds when civilians assumed office two years ago now costs more than fifty. The United Nations World Food Program projects that 40 percent of the country’s population will face “acute food insecurity” later this year if nothing changes, leading donors to begin planning for a new humanitarian emergency in the country’s urban areas.

As Sudan’s supporters watch this calamitous economic situation unfold, they are desperately searching for any defensible reason to restart lending and debt-relief programs to help avoid the coming financial collapse and humanitarian emergency. But, here too, the military has given no reason to show any leniency: Since the October coup d’état, dozens of leading political figures and protest leaders have been targeted for disappearance or arrest, while ninety-three pro-democracy demonstrators have been killed by security forces (which continue to use a nationwide state of emergency as justification for their brutality).

Last week, the country’s military leader, General Abdallah Fattah al-Burhan, even threatened to expel the head of the country’s UN peace-support mission for “lying publicly” and failing to report to the UN Security Council the supposed progress under the junta’s rule.

As the junta hunkers down internally, its emissaries are on a globetrotting tour of friendly capitals, from Moscow to Abu Dhabi, seeking political backing and a financial rescue. So far, no one has been willing to wager on the military or against the will of the Sudanese people, whose demands for democratic change have not abated.

But that could soon change. A series of recent meetings in Cairo, Riyadh, and Abu Dhabi suggest that Sudan’s longtime friends are rapidly losing patience with the political deadlock and impending economic collapse, and are searching for a way to create a soft landing (even if it comes at the expense of the Sudanese population’s democratic aspirations).

For Gulf partners, who bought up Khartoum real estate and commercial holdings at fire-sale prices in the waning days of the Omar al-Bashir regime (and since his ouster), Sudan’s unraveling would spell disaster for their investments. Egypt, which continues to view Sudan as its vassal, fears a mass exodus of Sudanese northward and political chaos on its southern border. Khartoum’s ability to stay in political lockstep with Cairo in the Grand Ethiopian Renaissance Dam negotiations with Ethiopia—Egypt’s single biggest foreign-policy priority—is also a major question.

Considering Sudan’s political history, the time appears ripe for another notorious elite deal, with regional buy-in, that walks the country back from the financial brink—but, in the process, short-circuits any hope that the bottom-up political movement will lead to genuine civilian rule and democracy.

Washington needs to get serious

For weeks, Khartoum has been awash in rumors that the hapless former prime minister, Abdallah Hamdok, seen as capable of putting financial markets at ease, could return. The re-establishment of a civilian and technocratic—but compliant—cabinet, which puts a more acceptable face on the regime, might also follow. But most concerning is the discussion of the establishment of a new Security and Defense Council that would ensure security interests remain firmly in the military’s hands and separate from civilian-led ministries. This would leave the military with ultimate executive authority.

Such a set-up would pave the way for quick elections, which the military and its political allies would surely dominate, and thereby provide new surface-level legitimacy for unreformed security interests and their foreign backers. As they likely see it, the only real losers under such a deal are the 44 million Sudanese not in the military or associated with the previous regime, who will once again see their aspirations for a peaceful, democratic future dashed by political expediency and regional stability.

Sudan’s dedicated pro-democracy movement would categorically reject any deal engineered with outside backing and did not emerge from a process they were fully a part of—but that doesn’t mean that the military and their allies might not still try. Importantly, it is not too late to prevent this scenario. But it requires the United States and partners to step up and demonstrate a strategic focus on long-term change and a return to core principles that bring it into greater alignment and allegiance with Washington’s true partners: the Sudanese people.

First, the international community must remind itself that Sudan’s revolution was never merely about overthrowing a dictator or dismantling his party; it was about undoing the corrupt, racist, and authoritarian power structures that have governed Sudan since independence.

Western calls for the military to enact “confidence-building measures” only plays into the existing discriminatory power dynamics in the country and elevate the security services as an equal, if not legitimate, part of Sudan’s political future (and therefore undermines a core tenet of the revolution). Instead, the military should be getting constant reminders that their days are numbered and a return to the pre-coup, pre-revolution status quo is both impossible and unacceptable.

Second, Washington needs to improve its public messaging in the face of the military’s political double-dealing. It is no longer enough for the United States to say it’s “on the side of the protesters.” If it were, it would call out every single abuse and death suffered by pro-democracy activists at the hands of the security services, as well as demand an investigation of crimes committed under the coup government. Instead, Washington’s numbness to the sustained deluge of crimes normalizes the deaths of innocent people and reinforces the military’s hold on power.

Third, the United States needs to start listening to the demands of the people and let them inform its public statements. Calling for a “return to civilian-led transitional government” or the “full implementation of the Juba Peace Agreement,” as recent US and Troika statements have, reflects deafness to popular calls for a new way forward, tells allies on the ground that stability is more important than transformation, and suggests that Washington would rather save face by salvaging formulas it once endorsed rather than seeing the writing on the wall and changing tack.

Lastly, it is well past time that the United States rebalance the negotiating table by imposing targeted sanctions on the individuals directing these abuses and profiting from the current stalemate. Since the military’s coup, those most responsible for the disruption of the transition and human-rights abuses have suffered no direct consequences for their actions. While symbolic, the recent sanctioning of Sudan’s Central Reserve Police by the US Treasury was short on impact and rang hollow with both the victims and the perpetrators: With no dollar-denominated bank holdings or large physical presence outside of Sudan, the sanctions have little to no practical effect. And by targeting an institution with far less responsibility for Sudan’s failing state than the military, even the symbolism of the action was lost on most.

Instead, Washington continues to betray a lack of real understanding of what is happening on the ground, who is responsible, and how to impact the calculations of the principal belligerents. But it is not too late to correct the course. Making clear the conditions required to restart lending and avoiding sanctions, conceived in consultation with its democratic allies on the streets, could help stave off another democracy-delaying elite pact and demonstrate that Washington is giving real weight to the popular will.

In the long run, this is what is required to achieve actual stability—not the cheap imitation Sudan has always known. 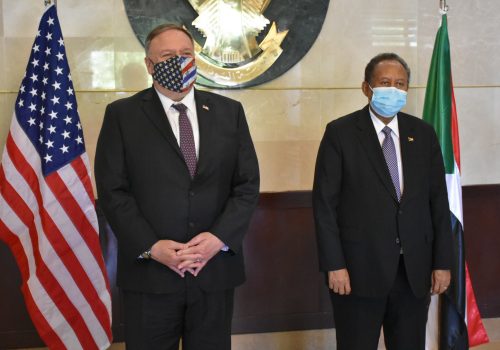 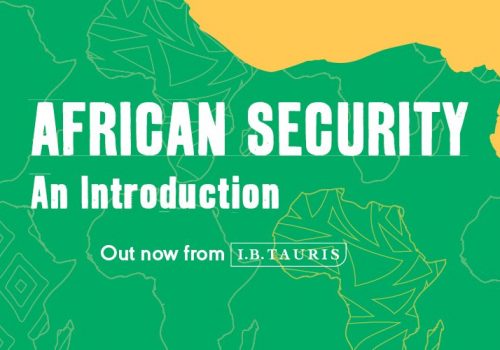 ‘African Security: An Introduction’ book launched with discussion of US security engagement in Africa

On Wednesday, April 8, the Africa Center hosted the virtual book launch of African Security: An Introduction, featuring a topical discussion of emerging trends in African security with authors Dr. John Siko and Dr. Jonah Victor. They were also joined by Ms. Brittany Brown, who formerly served on the National Security Council (under both Obama and Trump) and is now chief of staff for the International Crisis Group. 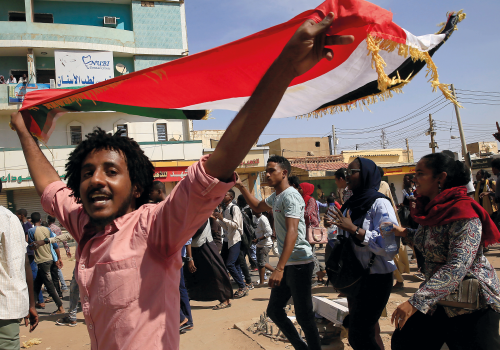 Annual Report By The Atlantic Council

Image: Protesters march during a rally against military rule following a coup to commiserate the anniversary of a sit-in that culminated with Bashir's overthrow in Khartoum North, Sudan April 6, 2022. REUTERS/Mohamed Nureldin Abdallah