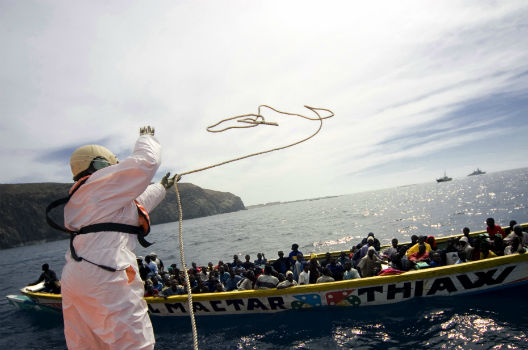 Over the weekend, European Union (EU) officials struck a deal with the West African nation of Mali to provide development funds in exchange for the country accepting the return of Malians whose asylum requests have been refused in Europe. While all the details of the agreement have yet to be announced, a brief statement by the Dutch foreign ministry indicated that Mali would receive 145.1 million euros of support across nine projects—six focused on Mali and three focused regionally. These projects would be aimed at both creating jobs and strengthening Mali’s border management capacity, including reinforcing the state’s registration system and implementing identity cards and biometric passports.

This deal, the first of its kind in Africa, follows the Valletta Migration Summit in November 2015, in which the EU announced the establishment of a $1.9 billion Emergency Trust Fund for Africa. Since the summit, European policymakers have rushed to use trade and development funds to pressure five African countries— Ethiopia, Niger, Nigeria, Mali, and Senegal—to implement policies that prevent the flow of asylum seekers to the continent and return those whose asylum requests are refused back to their country of origin. The development funds tend to be earmarked for addressing “root causes” of migration, including instability and lack of economic opportunities for African youths.

Broadly speaking, the deal marks the latest in the EU’s attempts to outsource restrictive migration policies that prevent asylum seekers from reaching European territory. In the Malian context, several of the deal’s themes are problematic and shed doubt on its overall impact on migration flows.

The EU’s strategy for reducing African migration flows assumes that increases in development aid will create economic opportunity, thereby reducing the number of Africans traveling to Europe to look for work.  This assumption is problematic for two reasons. First, aid takes a long time to create economic growth. In the short run, it’s unlikely that aid will have any noticeable effect on people’s decision to migrate. Second, as aid does start to encourage growth, it may have the opposite effect on migration. In very poor countries such as Mali, emigration tends to increase with household income, as more families are able to afford the expensive up-front cost of migration.

Further, in the Malian case, the EU’s plan to employ registration systems, identity cards, and biometric passports to control emigration is unrealistic. Malian asylum seekers tend to reach Europe via remote trans-Saharan routes across the northern Algerian border. While Mali’s porous borders—and the unimpeded flow of arms, drugs, and jihadist militias—have certainly contributed to the country’s woes, adequately policing Mali’s remote border deep in the Sahara Desert would be a monumental task. Presently, the Malian military, with the ongoing assistance of French forces and United Nations Multidimensional Integrated Stabilization Mission in Mali (MINUSMA), struggles to control territory outside of the major urban centers in the northern part of the country. Controlling the rural northern border areas to the extent that the government would be able to prevent Malians from leaving the country will be unattainable for a long time.

Finally, as the Malian government struggles to contain the plethora of militant Islamist groups active in the country, there are real ethical concerns about returning Malians back to areas where they could be under threat. Human rights organizations have documented the ongoing threat to civilians in Mali, by both Islamist militant groups and abusive state security services. In many cases, asylum seekers deported back to their home communities would be in danger.

One of the main problems with the EU’s “money-for-migration” deals is that they embolden governments to introduce repressive policies in the name of discouraging emigrants or fighting the smugglers that transit them. In the Malian context in particular, this quid-pro-quo provides incentives that could ultimately work against efforts to stabilize the North. In many of Mali’s northern regions, the central government has consistently struggled to win the trust and the support of populations that have historical felt marginalized and victimized. The perception of government oppression in these regions has contributed to episodic attempts at independence, the latest of which destabilized the central government to the extent that Islamist groups were able to take control over large swaths of the country. Going forward, the Malian government’s battle will be to develop its own legitimacy in the eyes of those marginalized communities.

In this regard, the EU deal and an increased focus on border management and migration control is unlikely to help. The heavy-handed tactics by Malian security forces in response to the country’s ongoing Islamist insurgency exacerbate grievances in marginalized communities. Islamist groups like the Macina Liberation Front have already been able to recruit amongst young Fulani populations disaffected by abuses by Malian security forces in the central part of the country. Providing the Malian government with more incentives to crack down in communities already antipathetic to the government will only exacerbate the insecurity. And more insecurity will ultimately prove counterproductive to the EU’s goal of reducing emigration flows out of the country.

Europe’s latest deal with Mali will not substantially impact the country’s emigration rates. If Europe is serious about dissuading young Malians from risking their lives crossing the Sahara and the Mediterranean, it should recalibrate its approach.

Julian Wyss was assistant director of the Atlantic Council’s Africa Center. Follow him at @JulianSWyss