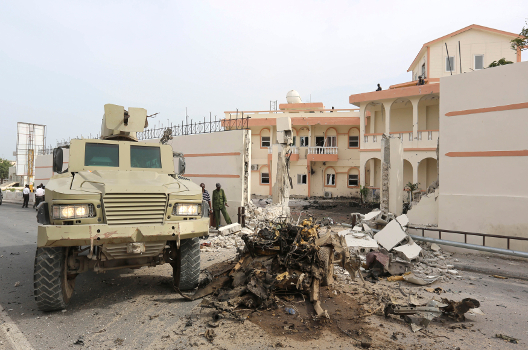 On Wednesday, the US embassy in Kampala, Uganda warned US citizens of a possible attack on Westerners in the city by the Somali terrorist organization al-Shabaab. On March 19, the US embassy in Djibouti closed for several days to “review its security posture;” the embassy did not provide further details, but the closure was likely also due to concerns about al-Shabaab. And the embassy in Nairobi, Kenya, last year cut its staffing levels, also citing the threat from the Somali terror group.

Al-Shabaab threats against the East Africa region are not infrequent, nor, unfortunately, are they hollow. In July 2010, the group launched twin suicide bombings in Kampala, killing seventy-four. In September last year, Ugandan police disrupted another al-Shabaab plot aimed at Kampala. Djibouti, too, has suffered a suicide attack from al-Shabaab, and Kenya has been under assault from the group for years.

But al-Shabaab has suffered a steady decline over the last four years at the hands of a multinational force called the African Union Mission in Somalia (AMISOM) that has pushed the group from all its major strongholds, including the lucrative port cities of Mogadishu, Kismayo, Marka, and Brava.

Al-Shabaab once attracted scores of foreigner fighters to Somali—including at least several dozen Somali-Americans—and raked in donations from around the world. But its battlefield setbacks and brutality against fellow Somali Muslims has withered much of the support it once enjoyed, relegating it to second tier status among international terrorist organizations. The rise of the Islamic State in Iraq and Syria (ISIS) and Boko Haram in Nigeria has exacerbated the trend. Both dominate international headlines, and ISIS is attracting thousands of foreign fighters, including Somali-Americans who were previously al-Shabaab’s constituency alone.

Al-Shabaab almost certainly feels the need to compete with these upstarts, something counterterror theorists call “outbidding.” One might think it is a good thing when terrorist groups compete, but it is not. One of the ways terrorist groups bid for money and recruits is to garner publicity, and the best way to do that is to carry out more, high-profile, and/or especially brutal attacks. One of the reasons ISIS so fastidiously broadcasts its atrocities around the world is because they bring international attention, including that of potential recruits and funders.

Throughout its existence al-Shabaab would have gladly attacked a Western target if the opportunity presented itself, but doing so has never been a focus of its efforts. All three countries al-Shabaab has attacked outside of Somalia are important troop contributors to AMISOM. For years its propaganda called would-be jihadists to Somalia and did not bother to call for them to carry out terror attacks in the West.

The pressures converging on al-Shabaab may be motivating the group to concentrate more on high-profile attacks, however, and there is little more high-profile than striking a Western target, particularly an embassy.

Strikes on international targets are also in keeping with the leadership’s ideology. For years the group was split between those who wanted to keep their jihad focused on the Somali war and those who viewed their terror campaign as part of a larger civilizational clash between Muslims and infidels. That debate was ended definitively in June 2013 when the then-emir of al-Shabaab, Ahmed Abdi Godane—a committed international jihadist—purged the group of anyone who was a threat to his leadership. Godane was killed in a drone strike in September 2014, but his successor, Ahmad Umar, was part of his inner circle and almost certainly has the same international orientation.

There has not been an overwhelming shift in the targets al-Shabaab chooses since the purge, but there have been a few worrying developments. During the Westgate Mall attack in Kenya in September 2013, the gunmen were reportedly looking especially for Kenyans and Americans during their rampage. It has since 2013 also issued at least three calls to its supporters to stage attacks in the West, including two since the beginning of this year, which is a departure from business as usual for the group. The threats over the last several years that have caused embassy closures, drawdowns, and warnings to US citizens in East Africa might be part of an emerging trend.

Fortunately, al-Shabaab’s ability to carry out a complex international attack is much diminished from the days when it struck Kampala and the Westgate Mall. Many of its high-level leaders have been killed; since December last year, US drone strikes have killed two men responsible for the group’s external operations and one who planned the Westgate Mall attack, a significant loss of expertise. It also brings in less revenue than it once did, and its diminished standing makes its appeals to supporters to launch lone wolf terror attacks unlikely to gain much traction.

But while al-Shabaab is wounded, it remains dangerous. It still has a sophisticated skill set as evidenced by the complex and effective attacks it launches in Somalia and Kenya. It continues to raise money from charcoal smuggling and taxation, and has a regional network of affiliates in Tanzania and Kenya. The steps the United States has taken with its embassies are heartening signs it is taking the group seriously, as it must; al-Shabaab’s declining fortunes and its need to outbid ISIS and Boko Haram may be making it more intent on attacking US interests than ever before.

Joshua Meservey is Assistant Director of the Atlantic Council’s Africa Center. Follow him on Twitter at @jmeservey.

Image: Somali government forces drive their armoured personnel carrier at the scene of an al-Shabaab suicide car explosion in front of the SYL hotel in Mogadishu January 22, 2015. REUTERS/Feisal Omar