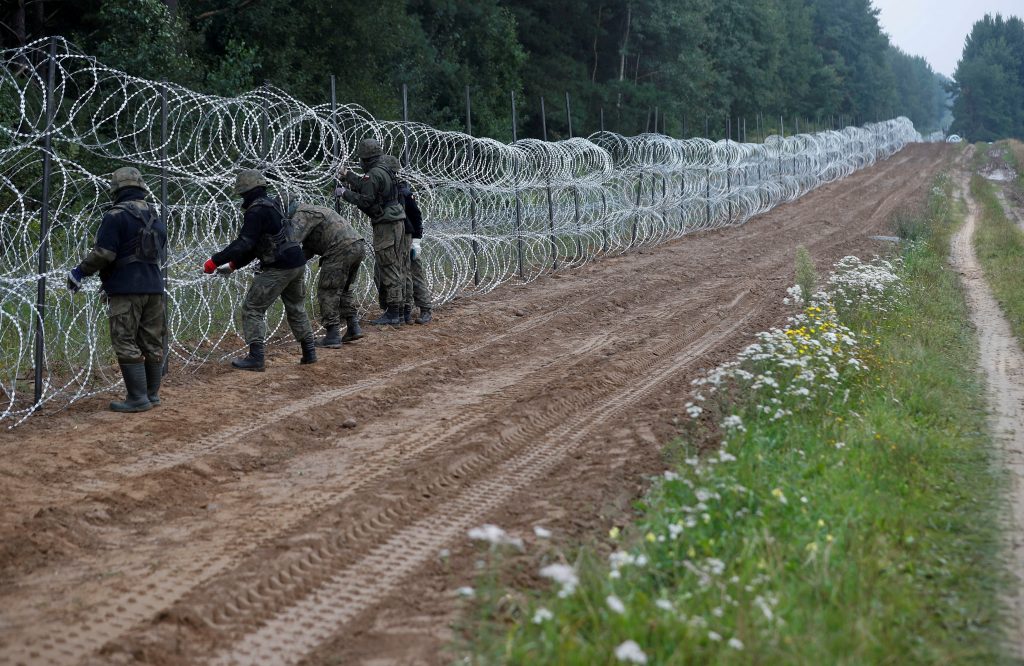 Elements of a new Iron Curtain continue to appear along Belarus’s border with the European Union. And as they do, officials in the Baltic states and Poland are increasingly concerned that there could be more to the escalating migrant crisis on the EU’s eastern frontier than meets the eye.

The Polish parliament is considering legislation to spend more than USD 400 million to build a wall on its border with Belarus. Poland has also nearly doubled its troop presence on its eastern border to almost 6,000 soldiers. These moves come weeks after Polish officials claimed that Belarusian forces had fired shots across the border on October 7.

Tensions between Belarus and the European Union have been mounting for months since Alyaksandr Lukashenka’s autocratic regime retaliated against EU sanctions by manufacturing a migrant crisis by flying thousands of migrants to Minsk from Middle Eastern hot spots and then spiriting them across the border into Poland, Lithuania, and Latvia. More than 16,000 have been prevented from illegally crossing the Polish border, more than 4,000 in Lithuania, and nearly 1,800 in Latvia.

The migrant crisis on Europe’s eastern border is not a sideshow. It is an escalating security nightmare that is unfolding as Belarus becomes increasingly militarized and as Russia rapidly expands its military footprint in its smaller but strategically vital neighbor. And it is becoming increasingly apparent that there could be much more sinister agendas at play in this manufactured crisis than a desire on the part of the Belarusian dictator to get revenge on Europe for imposing sanctions on his regime.

Back in September, Polish Prime Minister Mateusz Morawiecki told reporters in Warsaw that Lukashenka was not acting alone, but was instead being assisted by Kremlin leader Vladimir Putin. “We’re dealing with a mass organized, well-directed action from Minsk and Moscow,” he said.

The manufactured migrant crisis is an effort by Putin and Lukashenka to wage hybrid war and destabilize Europe. And it is a human tragedy fabricated by two autocrats who are manipulating desperate people fleeing war and repression.

But according to Latvian Foreign Minister Edgars Rinkevics, it also appears to be an effort to stealthily smuggle potential agents and provocateurs into Europe. “There are reports that some of those people have been living in Belarus or in Russia for years. Some of them are affiliated with established terrorist organizations so there are also security concerns,” Rinkevics told Newsweek in reference to the people illegally crossing from Belarus into neighboring European Union member countries.

Lithuania’s Deputy Foreign Minister Mantas Adomėnas said back in August 2021 that Russian nationals were also among those attempting to illegally cross the Lithuanian border. “We had a dialogue with the Russian representative because Russian citizens are also crossing the border,” Adomėnas told Ekho Moskvy.

In a blog post at the time, veteran Russia-watcher and former US State Department official Paul Goble wrote that in addition to “exploiting the situation for its own purposes to create problems for Lithuania,” Moscow appeared to also be using the migrant flow “to cover the insertion of Russian illegals.”

The possibility that Moscow and Minsk may be surreptitiously spiriting agents into Poland and Lithuania is disturbing because those countries have become a haven for large numbers of Russian and Belarusian dissidents and opposition figures who have fled their homelands. Meanwhile, both Putin and Lukashenka have become increasingly bold about targeting dissidents living abroad.

Russia, of course, has a long history of sending agents to assassinate dissidents abroad, including the killing of Aleksandr Litvinenko in London in 2006, the attempted assassination of Sergei Skripal in Salisbury in 2018, and the shooting death of Zelimkhan Khangoshvili in Berlin in 2019.

In August 2021, the badly beaten body of Belarusian dissident Vital Shyshou, who founded an organization to assist other persecuted Belarusian exiles, was discovered hanged in a park in Kyiv.

One of Shyshou’s colleagues, Yury Shchuchko, told Current Time television that the Security Service of Ukraine (SBU) had warned about “people from Belarusian special operations forces and other units coming to Ukraine to physically liquidate” them. “They asked us to be cautious, because a network of Belarusian KGB agents is operating here and anything is possible.”

EU foreign ministers are considering possible new sanctions against Belarus’s national airline Belavia for transporting migrants to Belarus for the purpose of spiriting them into the European Union. The sanctions would include banning European companies from doing any business with Belavia. Germany has also launched a criminal investigation into the “organizers” of the current migrant crisis, a not so veiled reference to Lukashenka.

These are steps in the right direction. But the recent actions of the Putin-Lukashenka axis of autocrats on Europe’s eastern frontier represent a security crisis that demands more urgency from both the EU and NATO than we have seen thus far.

Shots were fired at the Belarusian-Polish border last week as Belarusian dictator Alyaksandr Lukashenka’s hybrid war against the European Union threatened to escalate further amid the weaponization of migrants.

Image: Polish soldiers build a fence on the border between Poland and Belarus near the village of Nomiki, Poland. August 26, 2021. (REUTERS/Kacper Pempel)