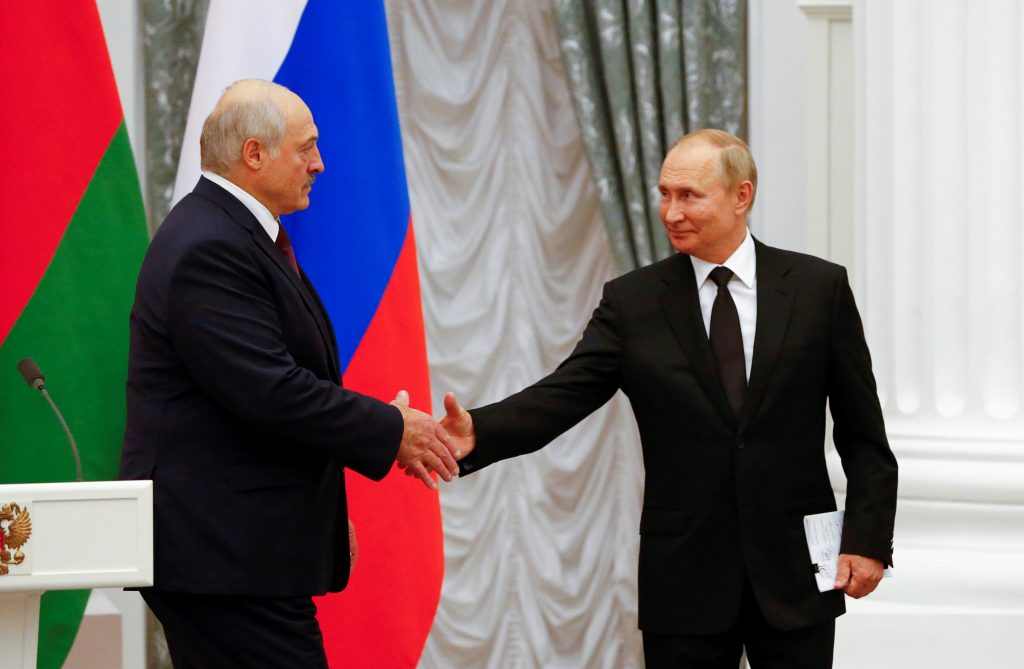 Shots were fired at the Belarusian-Polish border last week.

Just let that sink in for a moment.

Anna Michalska, a spokeswoman for the Polish Border Guards, said Belarusian forces fired shots across the European Union’s eastern border on October 7. She added that nobody was injured and stated that the shots were “probably” blanks.

Blanks or not, the fact that there was gunfire on the European Union’s eastern border represents a significant escalation in autocratic Belarusian leader Alyaksandr Lukashenka’s ongoing hybrid war against the West. This escalation is happening as Belarus is becoming increasingly militarized and as Russia is steadily expanding its footprint in its smaller and strategically important neighbor.

Tensions between Belarus and the European Union have been mounting since Lukashenka retaliated to EU sanctions by manufacturing a migrant crisis on the country’s borders with EU member states Latvia, Lithuania, and Poland. The Lukashenka regime has been flying migrants to Minsk from the Middle East and then spiriting them across the border. Latvia, Lithuania, and Poland have responded by erecting barbed wire fences and sending military forces to control the border.

General Roman Polko, the acting director of Poland’s Bureau of National Security, told wPolityce that in orchestrating a crisis on the border, Lukashenka was attempting to set off a “human bomb” against Poland and Europe. “Lukashenka naively believed that Europe would succumb to blackmail, lift all sanctions, and perhaps even provide some financial assistance just to stop the flow of migrants. However, he miscalculated,” Polko commented. “So now he is resorting to even more extreme measures.”

Polko added that the tension Lukashenka is provoking on the EU border is a component of Kremlin leader Vladimir Putin’s own ongoing confrontation with the West. “Putin is still waging a hybrid war,” he said. “He knows that Russia is too weak to win an open armed conflict as far as the NATO alliance is concerned. Besides, Russia is too dependent on Western economies to be able to afford such a conflict. I say Russia all the time because Putin is pulling the strings here.”

In this sense, Lukashenka plays a similar role for Putin as the Chechen strongman Ramzan Kadyrov, who is widely believed to have been behind the assassinations of Putin critics like Russian opposition leader Boris Nemtsov and investigative journalist Anna Politkovskaya. By allegedly acting as Putin’s willing executioner, Kadyrov provides the Kremlin leader with plausible deniability and distance from operations he wants carried out without his fingerprints.

Lukashenka now appears to be playing a similar role vis-à-vis the West. If Kadyrov is Putin’s willing executioner, Lukashenka is his willing instigator and provocateur. In fact, the Belarusian dictator’s manufactured migrant crisis mimics tactics Russia has been accused of using against Europe in the past.

The escalating tension on the Belarusian-Polish border comes as analysts note a growing anti-Polish campaign by the Lukashenka regime. Pavel Usov, director of the Warsaw-based Center for Political Analysis and Prognosis, wrote in a recent commentary, “it is in the interests of Lukashenka to demonize the West, and Poland in particular, to try to present it to the Belarusians in the form of an occupier and a threat who seeks to seize the country and enslave it.”

Minsk and Moscow have also sought to score propaganda points when migrants have died on the border or when satellite imagery showed Polish border guards pushing them back into Belarus. Lithuania has attempted to mitigate the crisis at its border by allowing migrants to apply for asylum at its embassy in Minsk.

Germany, which has recently experienced an increase in illegal crossings over its border with Poland by Iraqis and Syrians who arrived in Europe from Belarus, has launched a criminal investigation into the “organizers” of the current migrant crisis, a not so veiled reference to Lukashenka.

The crisis on Europe’s eastern border is not a sideshow. It is a human tragedy that has been manufactured by two autocrats manipulating desperate people fleeing war and repression. It is an effort by the Putin-Lukashenka axis of autocrats to wage hybrid war and destabilize Europe. And it is escalating. With winter fast approaching and temperatures plummeting, the humanitarian crisis at the EU border is likely to worsen dramatically in the weeks ahead.