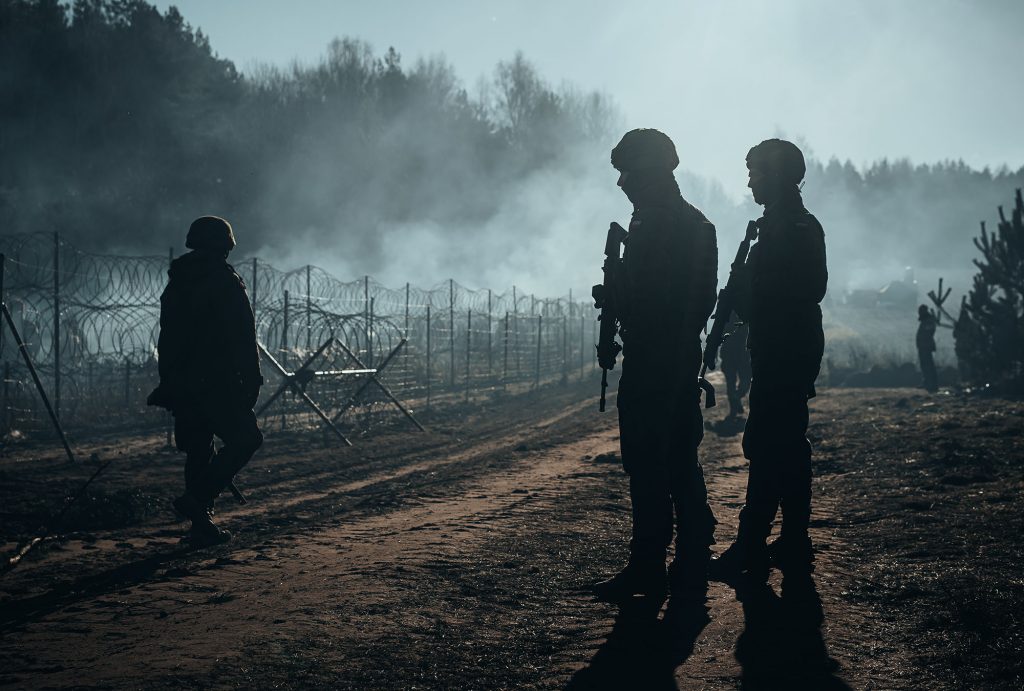 As tensions on the EU border with Belarus continue to escalate, it seems Europe is slowly waking up to the fact that the man ultimately responsible for this manufactured migrant crisis is not Belarusian dictator Alyaksandr Lukashenka but his patron and sponsor, Vladimir Putin.

Speaking on November 9, Polish Prime Minister Mateusz Morawiecki pointed an accusing figure directly at the Kremlin. “This attack which Lukashenka is conducting has its mastermind in Moscow, the mastermind is President Putin,” Morawiecki told an emergency parliamentary session in Warsaw.

Days later, long-serving German MEP Manfred Weber echoed these sentiments. Weber, who leads the European People’s Party, the largest party in the European Parliament, repeated Morawiecki’s claim that Vladimir Putin was the “mastermind” behind Lukashenka’s actions, which he labeled unambiguously as “a hybrid war against the European Union.”

It is not difficult to see why more and more European politicians now suspect Moscow of orchestrating events in neighboring Belarus. Putin himself has vocally defended Belarus, while Russian Foreign Minister Sergei Lavrov has suggested the EU should pay Minsk to resolve the crisis. The Kremlin-controlled Russian media has also provided strong information support for the Lukashenka regime.

Many of the migrants now concentrated along the EU’s eastern border claim to have reached Belarus via Russia itself. Nor is this the first time Moscow has been accused of weaponizing migrants in its conflict with the West. During the country’s ongoing military intervention in Syria, Russia has repeatedly faced similar claims.

Moscow also appears to be increasing its direct military involvement in the crisis. In an alarming development, Russia and Belarus announced plans on November 11 to begin joint combat alert patrols along the Belarusian border with Latvia, Lithuania, Poland, and Ukraine. “This ring around the Baltic states, Poland and Ukraine must be monitored by Russian and Belarusian servicemen,” commented Lukashenka. In parallel to this statement, Russian nuclear bombers conducted a monitoring mission in Belarusian airspace.

Crucially, few credible observers believe the Belarus dictator would dare engage in such provocative actions on the EU border without permission and encouragement from the Kremlin. While relations between Lukashenka and Putin have historically been complex, the Minsk strongman’s increasing international isolation and domestic vulnerability following the deeply flawed August 2020 Belarusian presidential election have made him almost entirely dependent on Russia for his political survival.

Over the past fifteen months, Lukashenka has been forced to grant Moscow a wide range of concessions that have undermined Belarusian sovereignty and placed his country firmly under Russian influence. This process has been particularly prominent in the security sphere, with the establishment of new joint military bases and a record number of joint army exercises creating what amounts to a permanent Russian troop presence in Belarus, leading many to remark on an accelerating “military merger” between the two countries.

Given the context of Lukashenka’s deepening dependency on Russia, it seems highly implausible that he would act alone in instigating the current border crisis. Instead, the confrontation bears all the hallmarks of the hybrid war tactics adopted by the Kremlin in recent years as it has has sought to weaponize everything from social media to illegal immigration in its confrontation with the Western world.

Europe has been repeatedly warned that Russia’s aggressive actions in the gray zone between war and peace will only increase until Vladimir Putin is decisively confronted. From the rostrum at the Parliamentary Assembly of the Council of Europe (PACE) and other international platforms, I have often attempted to alert my European colleagues to the looming danger. However, many have preferred to dismiss such comments as alarmist while calling for greater dialog with Moscow.

These advocates of engagement are prone to downplaying the significance of Putin’s war in Ukraine, while opting to treat the many cyber-attacks, disinformation campaigns, and political assassinations taking place across Europe as isolated incidents rather than evidence of Russia’s hostile intentions. Instead, they promote a “business as usual” approach towards Moscow and continue to back Russia’s Nord Stream 2 pipeline project, even as the Kremlin openly uses energy as a geopolitical weapon against Europe.

This appeasement of Putin has brought us to the current situation, with rival troops now massing within meters of each other on opposing sides of the EU’s eastern border and the entire continent one stray bullet away from potential disaster.

Sadly, the Western response to this latest Russian escalation has been characteristically insufficient. It is wishful thinking to suggest the new sanctions measures proposed by the EU will force the Kremlin to deescalate.

In the short term, much will now depend on the resolve of Poland and Lithuania. At the same time, the Ukrainian authorities need to treat events in Belarus as an extension of Russia’s hybrid war against their own country. With Lukashenka now acting as Putin’s puppet, the one thousand-kilometer Ukrainian-Belarusian border must be recognized as new front in the conflict.

In order to counter the Kremlin threat, the countries on the front lines of the hybrid war with Putin’s Russia should aim to unite their efforts. The ideal platform for this is the Lublin Triangle, a diplomatic initiative launched last year by the foreign ministers of Ukraine, Poland, and Lithuania. It would also make sense to involve Latvia and Estonia if possible and forge a more formal Baltic-Black Sea alliance that would facilitate deeper military cooperation.

While they work to create the conditions for a more coordinated strategy, these front line countries should also seek greater US and UK engagement. Britain and America remain the two most reliable partners for the countries facing the challenge of a resurgent Russia. Needless to say, such efforts must be approached in a manner that will complement rather than detract from the role of NATO as the ultimate guarantor of peace in the region.

With the security situation currently in danger of spiraling out of control on the Belarusian border, and with Russian forces once more concentrating close to Ukraine, there is simply no time to waste. We may be poised for a perfect storm of Russian aggression during the coming winter months and can no longer afford to have any illusions about the gravity of the situation.