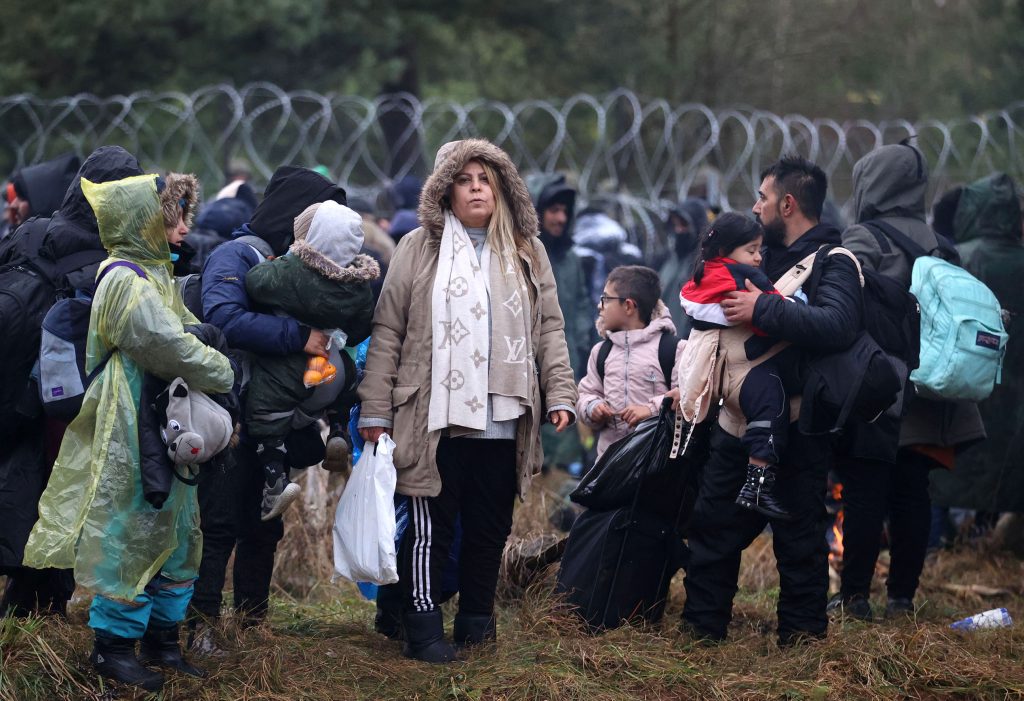 Turning as usual to aggression, Belarus’s authoritarian strongman Alyaksandr Lukashenka has escalated attacks on Poland and the European Union by encouraging and, it seems, forcing would-be migrants from Iraq, Syria, and other countries in the Middle East to breach the EU’s eastern border.

On November 8, the regime in Minsk was seen bringing people, some flown in from the Middle East for this purpose, to the Polish frontier and encouraging them to rush the border. In response, Polish authorities have deployed border guards, police forces specializing in crowd management, the National Guard, and even some military forces. Video footage of the chaos and confrontation spread across social media in close to real time, sparking fears for the safety of the men, women and children caught up in this volatile situation in the forests of Eastern Europe.

It is not hard to discern why Lukashenka is doing this. Poland, like Lithuania, is active in its support for the Belarusian democracy movement. It has welcomed Belarusian political exiles, including leaders of the opposition led by Sviatlana Tsikhanouskaya, who is widely believed to have legitimately won the last Belarus presidential elections in August 2020. Many Belarusians and Poles have compared the Belarusian democracy movement to Poland’s Solidarity, which suffered years of repression after 1981 but ultimately won elections and led Poland after 1989.

Furthermore, the Poles and Lithuanians have extolled the old multi-ethnic Polish-Lithuanian Commonwealth, which included present-day Belarus, as a precedent for Belarus’s democratic future with Europe rather than under the Kremlin. Poland’s president has even addressed the Belarusian people in Belarusian. Poland has its own internal stresses and challenges, but its Belarus policy reflects the still-strong pro-democracy thread in national policy, especially toward Poland’s eastern neighbors and Russia.

Lukashenka hates all this, of course, and sees it as a threat to his own regime. His brutality, especially against his own citizens, is matched by his Putinesque cynicism. By pushing Middle Eastern migrants against the EU border, he seeks to create local chaos and generate fears about another wave of uncontrolled mass migration entering the EU. This topic has previously proven politically divisive in Europe and has fueled nativist political movements across the continent, including in Poland.

By manufacturing a migration crisis, Lukashenka aims to polarize Poland internally and divide the EU with what is, in effect, a hybrid attack. He may well believe this will give him leverage to get the EU and Poland to back away from their support for the Belarusian democracy movement in return for being spared another round of internal stress about migration from the Middle East.

Recent press reports suggest Lukashenka is flying more and more Middle Eastern would-be migrants into Minsk to intensify the pressure. The Russian Foreign Minister, Sergei Lavrov, has meanwhile suggested that the EU respond to the crisis in the same way as it handled a similar migration crisis in Turkey, namely by funding Belarus to deal with the problem. Other than trolling, the Kremlin calculation here may be to use the migration issue to force the EU into easing the pressure on Lukashenka and becoming a source of financial stabilization for the regime.

A darker interpretation of recent events also cannot be excluded. A few days ago, a Polish border patrol ran into Russia-speaking and presumably Belarusian “little green men” carrying weapons on Polish territory. At the same time, Russia is massing forces once again on the border with Ukraine.

Putin is putting growing military pressure on the West. This is taking place directly against Ukraine, and indirectly through Lukashenka against Poland, the latter probably as a pressure tactic rather than a serious military threat. These events point to another escalation in Russia’s hybrid conflict with the West, which has political, energy, security, and informational dimensions.

Moscow and Minsk may sense vulnerability. Warsaw and Brussels have been quarrelling over various issues lately, such as the supremacy of EU law and the independence of Poland’s judiciary. Poland has also been fighting with Germany about the ill-considered Nord Stream 2 gas pipeline, which appears to be a useful asset in Putin’s efforts to use energy as a political weapon.

Meanwhile, the Polish ruling party had picked a fight with the US over media freedoms by pushing a media law targeting the country’s largest independent television network, TVN, and potentially forcing its US owners to sell their shares. Fortunately, this media law stalled when Poland’s president threatened to veto it on free speech and business grounds.

Lukashenka may have judged that Poland was sufficiently isolated in Europe and from the Biden Administration that he could succeed in triggering the Polish government to abandon its support for the Belarusian democracy movement out of fear of Muslims crossing its border. This is the sort of calculation that Putin, Lukashenka’s ultimate backer, might have made.

Europe and the US need to prove Lukashenka wrong in his cynical assessment. Whatever Brussels and Washington’s concerns about some aspects of Polish government policy, Lukashenka is engaging in an act of hybrid aggression and using non-military means to attack the EU’s borders. He is weaponizing human misery and, arguably, engaging in human trafficking. Lukashenka is attacking Poland because of its support for Belarus’s democratic and European future.

Regardless of other serious issues between them, the US, the EU, and the UK need to show solidarity with Poland and be prepared to demonstrate a similarly united front with respect to Lithuania and others if necessary. They also need to make humanitarian moves to protect the men, women and children from the Middle East who find themselves caught up in this dangerous geopolitical confrontation as temperatures plummet and winter draws close.

The response has already begun. On November 8, EU Commission President Ursula von der Leyen issued a strong statement that condemned Lukashenka’s aggression and, importantly, urged retaliatory action. Proposed steps included approving sanctions against Belarus currently under preparation by the EU and the US in response to earlier acts of repression, and potentially targeting airlines that are active in moving would-be migrants to Belarus.

Events on the Polish-Belarusian border were also discussed on November 9 by Poland’s President Andrzej Duda and NATO Secretary General Jens Stoltenberg. Stoltenberg asked to be kept informed about developments on the ground, understanding the risk of further deterioration in the security situation in and around Poland, Belarus, and Ukraine.

This is a good start, especially the threat to impose sanctions against airlines supporting Lukashenka’s aggression. But there is much more the EU and US should do together with the UK.

Steps could include jointly approaching countries of origin and asking that they not allow their people to be trafficked by Lukashenka. Similarly, offers could be made to provide safe countries of origin with funds and logistics to repatriate their citizens out of danger in Belarus. Consultations with the United Nations refugee agency must also be urgently launched over how to guarantee their safety.

It is critical, meanwhile, to inform airlines that their complicity in Lukashenka’s scheme could result in fines, bans of overflight rights to Europe and the US, or full blocking sanctions that could put them out of business. Turkish Airlines and Russia’s Aeroflot are two of the main culprits and could be targeted early on.

If the situation continues to deteriorate, it is worth considering invoking NATO’s Article 4 that involves consultations when “the territorial integrity, political independence, or security of any of the parties is threatened.”

The EU itself must continue to offer to deploy the European Border and Coast Guard Agency, Frontex, to the Polish government. Frontex is headquartered in Warsaw and it should at a minimum offer to have a regular presence on the border.

If the Belarusian military continues its aggressive probing of the Polish border, NATO allies should propose to send special forces units to the Polish-Belarusian border as a deterrent against further Belarusian provocations.

Ongoing sanctions preparations should be coordinated and intensified. The EU and UK have already imposed sanctions on Belarusian government bonds. There is no good reason for the US to refrain from joining them. Sanctions should also include Russian officials and oligarchs who are actively supporting the Belarus regime.

Whenever possible, the US should act in concert with the EU on Belarus sanctions. But if the EU cannot reach consensus because one of its more Putin-friendly governments imposes a veto, the US, UK and also Canada can act ahead of the EU, coordinating with each other and informally with key member states.

These steps matter. It is vital to send an unambiguous signal to the Kremlin. This means announcing jointly to Russia that further escalation on the Polish-Belarusian border, just as on Russian-Ukrainian border, is unacceptable and will be met with serious consequences. This message was articulated recently by the CIA director, Bill Burns, during his visit to Moscow. It is worth repeating.

For understandable reasons, the US, UK, and EU often prefer incrementalism in sanctions and related measures. But this year alone, Lukashenka has engaged in air piracy to force down a Ryanair commercial airliner and seize a Belarusian journalist flying between EU capitals, and is believed to be behind the apparent assassination of a Belarusian dissident in Kyiv.

He is now attacking the borders of an EU and NATO member. Pushing back, in coordinated fashion, is the right step. Not acting together will almost certainly encourage Lukashenka, and his patron Putin, to further escalate this already dangerous situation.