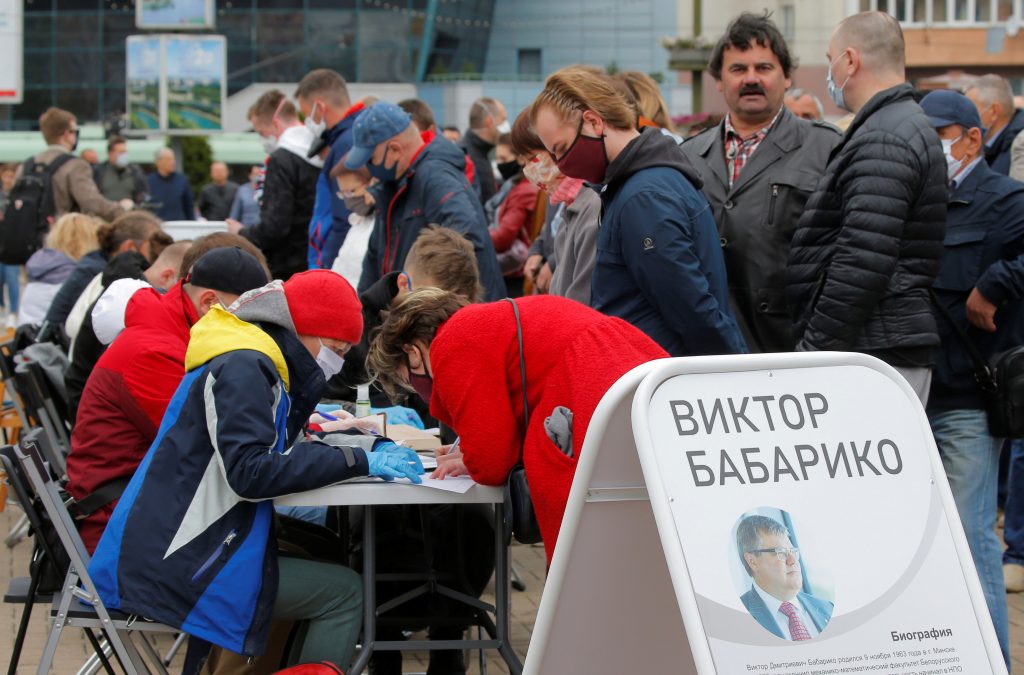 He is often referred to as Europe’s last dictator, but five-term president of Belarus Alexander Lukashenko may be about to face a genuine challenge at the ballot box for the first time in a quarter of a century. Belarusians will go to the polls on August 9 to elect a new president, with a number of relatively viable alternatives from within the country’s political establishment seeking to replace the man who ranks as the longest-serving current head of state in the former Soviet Union.

Lukashenko’s position has weakened in recent months due to a number of factors. His decision to downplay the coronavirus pandemic has backfired particularly badly. Lukashenko initially dismissed the virus and advised Belarusians they could stay healthy by taking tractor rides, visiting saunas, and drinking vodka. This buffoonery failed to prevent the spread of the pandemic, with over 50,000 confirmed cases so far in the country. Many also openly question the credibility of the government’s abnormally low official figures for related deaths. This has led to comparisons with the doomed attempts of the Soviet authorities to deny the 1986 Chornobyl disaster.

Meanwhile, the country is also suffering from a mounting economic crisis caused by turbulence on energy markets and the consequences of the global coronavirus crisis. The Belarusian economy is currently expected to shrink by 4% in 2020 according to World Bank forecasts, representing the largest annual contraction since the mid-1990s. These blows have struck at the foundations of Lukashenko’s 25-year rule. Until now, the authoritarian Belarusian ruler has managed to prevent the rise of popular opposition by guaranteeing economic stability along with fundamentals like rising standards of healthcare. Recent events have placed this unwritten agreement in jeopardy.

Geopolitical considerations have played a role in nurturing the tentative emergence of a more democratic climate in Belarus. Lukashenko’s increasingly tense ties with Russia persuaded him in late 2019 to take the usual step of allowing a series of public protests against Moscow’s attempts to pressure Belarus into deeper integration. The result was large-scale rallies that served to mobilize and embolden the country’s political opposition.

This mood has led to unusual scenes of street-level political activism across Belarus in recent weeks. During the early stages of the current election campaign, thousands have been queuing up in towns and cities to sign petitions backing the candidacies of Lukashenko’s main rivals. Candidates must collect 100,000 signatures by early July in order to be eligible for the ballot.

Some anti-Lukashenko protesters have begun brandishing slippers in response to popular YouTube vlogger and presidential hopeful Syarhey Tsikhanouski’s call to squash the Belarus president “like a cockroach”. This has led to tentative talk of a looming “slipper revolution” in line with the branded protest movements that have succeeded in toppling authoritarian regimes elsewhere in the former Soviet Union.

Despite this spike in street-level political activity, the rise of Belarusian democracy should not be exaggerated. Indeed, few analysts believe there is any real chance of a Minsk Maidan in the aftermath of the coming election. Nevertheless, the August vote is shaping up to be the most open and competitive campaign since Lukashenko first took power in 1994.

The most interesting challenge will likely come from a pair of candidates with solid establishment credentials who offer a modernizing alternative to the stagnation of the Lukashenko era and have the potential to win significant support among Belarus’s famously conservative electorate. Viktor Babariko is the former head of Belgazprombank, while Valery Tsepkalo is a former senior Lukashenko administration official who served as Belarusian ambassador to the United States before more recently heading up the Belarus Hi-Tech Park, one of the largest IT clusters in Central and Eastern Europe. Unlike the puppets and outsiders who are generally permitted to run against Lukashenko, Babariko and Tsepkalo have the necessary seniority and establishment experience to be taken seriously as alternatives to the current political status quo.

Lukashenko has attacked both candidates with claims of corruption and questioned the sources of their campaign funding. In what have been widely interpreted as thinly veiled references to possible Russian interference in the election campaign, he has also spoken darkly about the efforts of an unnamed foreign power to unseat him. These references to Russia are thought to be aimed primarily at Babariko. The offices of the presidential hopeful’s former bank were raided on June 11 as Lukashenko turned up the pressure on his rivals. Belgazprombank is the local affiliate of Russia’s Gazprombank.

Lukashenko is not the only figure to raise concerns over Babariko’s alleged Kremlin connections. Rival presidential candidate Hanna Kanapatskaya was particularly outspoken in her criticism, commenting, “A Gazprom manager cannot become the president of our country. It would be like allowing a pedophile to become a nursery teacher.”

Against this unfamiliar backdrop of competitive politics, Lukashenko is positioning himself as a strong leader ready to defend the country from external threats. His campaign rhetoric reflects the tense geopolitical context of the August election. Over the past year, the relationship between Belarus and Russia has become increasingly strained as Lukashenko has sought to evade mounting Kremlin efforts to draw Belarus into ever-closer integration.

In an apparent bid to broaden Belarus’s geopolitical options, the Minsk strongman has increased cooperation with the US. This led to the first delivery of American oil to Belarus in May 2020. The thaw in Minsk-Washington ties has also been evident in the nomination of the first US ambassador to Belarus in more than a decade.

Events in Belarus are being keenly followed in neighboring Ukraine, where there is huge concern that any Kremlin gains in the upcoming presidential vote could significantly intensify the Russian military encirclement of Ukraine. Belarus already hosts a limited Russian military presence and is believed to be vulnerable to Kremlin infiltration within the political and security establishments. However, the country is widely seen as better prepared to resist Russian hybrid aggression than Ukraine was in 2014, when the Yanukovych presidency had already greatly reduced Ukraine’s ability to offer organized resistance.

This combination of domestic and geopolitical factors makes the upcoming Belarusian presidential campaign potentially the most important for a generation. It remains far from clear whether Lukashenko will allow his reign to be ended at the ballot box, but his need to engage with potential Western partners may help to moderate any efforts to silence political opponents in the run-up to the vote.

For the Belarusian public, the political engagement of recent weeks has been genuinely unprecedented. It therefore comes as no surprise that many are already talking about the 2020 presidential campaign as something of a watershed moment in the country’s post-Soviet history. The August 9 vote may not necessarily lead to decisive political change in the country, but the election itself is already offering a glimpse of what a post-Lukashenko Belarus could look like.

Image: People queue up to add their signatures in support of potential candidates in the upcoming presidential election in Belarus. May 31, 2020. REUTERS/Vasily Fedosenko