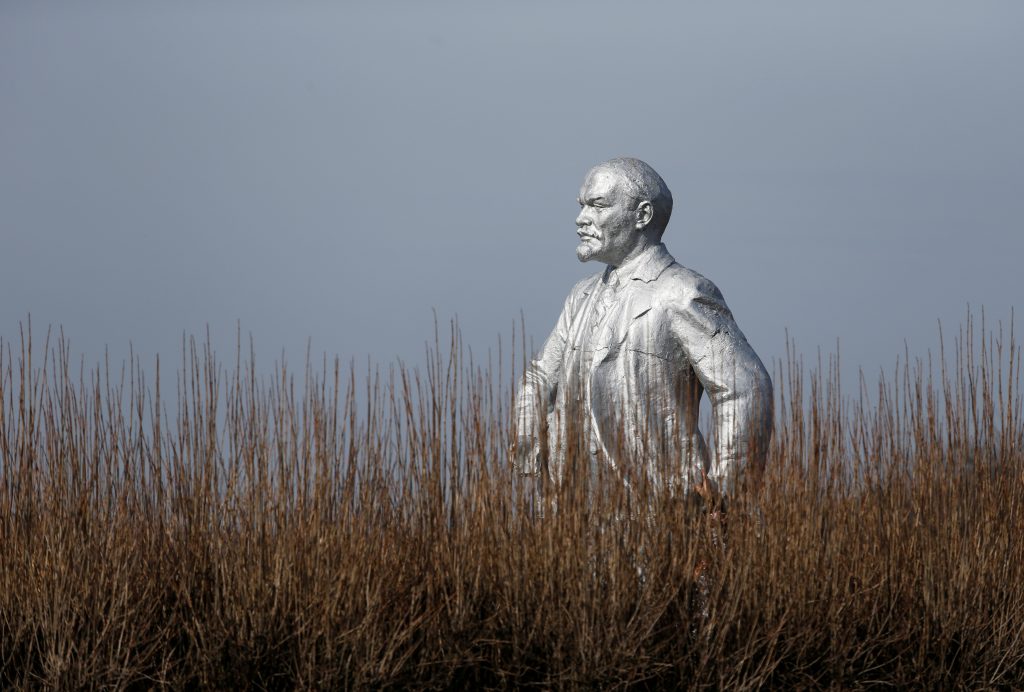 The tide of history ebbs and flows, with decades of relative stability interspersed by periods of rapid and dramatic change. We may now be entering one such period, with the disruptive role of the coronavirus crisis creating new realities across the planet. This is particularly true of the former Soviet world, where the crash in energy prices caused by the pandemic poses existential challenges to both the Russian economy and the Kremlin’s great power pretensions. For Ukraine and other post-Soviet nations seeking to escape from Moscow’s unwelcome imperial influence, the unfolding crisis represents a once-in-a-generation opportunity to resume the historic transition begun in 1991.

The collapse of the Soviet Union is typically depicted as a specific event, or a closely connected series of events, that took place over a relatively short period of time from the fall of the Berlin Wall in November 1989 to the formal dissolution of the USSR in December 1991. In fact, it is a ongoing process that is still underway today. Then as now, plummeting oil prices played a crucial role in weakening the Kremlin. In another echo of today’s situation, Ukraine was also the decisive theater when the Soviet empire first began to unravel at the dawn of the 1990s.

If talk of historic transitions seems somewhat far-fetched, it is worth noting that virtually nobody foretold the fall of the USSR. In the early 1980s the Cold War seemed at its peak as the superpowers exchanged Olympic boycotts and the Red Army marched into Afghanistan. However, the 1986 Chornobyl tragedy helped to expose the moral bankruptcy of the Communist regime, while Gorbachev’s attempts at reform merely served to lift the lid on the horrors of the gulag and the crimes of the Stalin era. All this was taking place against a backdrop of sharp economic decline driven by low oil prices and an escalating arms race.

The first Soviet republics to begin detaching themselves from the empire were the Baltic nations, who still held on to memories of statehood that has been extinguished during WWII. Beginning with the 600km Baltic Way human chain protest, which was held on August 23, 1989 to mark the fiftieth anniversary of the 1939 Nazi-Soviet Pact, the Baltic nations were able to inspire similar independence movements throughout the USSR.

As the number two Soviet republic in terms of population and wealth, Ukraine was destined to play a crucial role as events unfolded. Ukraine’s 1990 declaration of sovereignty sparked desperate attempts to save the USSR by fundamentally reforming the relationship between the constituent republics. When hardliner opponents of these efforts launched an abortive coup in August 1991, Ukraine responded by declaring independence. This was to prove the final nail in the coffin of the Soviet Union.

Ukraine’s influence on the Soviet collapse was underlined by the country’s participation in the December 1991 talks that finally brought the curtain down on the USSR. Only three of the fifteen Soviet republics took part in these negotiations, with Ukraine sitting down alongside Russia and Belarus. This importance was nothing new. Ukraine has always occupied a special place in the Russian imperial imagination, serving a range of vital functions including buffer state, granary, and ancestral homeland.

The conquest and colonization of Ukraine during the seventeenth and eighteenth centuries marked Russia’s arrival as a major European power. Throughout the twentieth century, the struggle to retain its grip on Ukraine was to be a recurring theme in Russia’s bid for superpower status. Ukraine played a central role in the civil war that followed the 1917 Russian Revolution, and was the scene of Stalin’s worst crime against humanity, the 1930s Holodomor forced famine. During WWII, Ukraine was the main battleground between Soviet and Nazi forces. This apocalyptic experience as the epicenter of twentieth century totalitarianism cost the lives of over 12 million Ukrainians.

Russia’s readiness to fight for Ukraine underlines why the loss of the country has traditionally been regarded with such dread in Moscow. This goes beyond strategic or economic considerations, and reflects the centrality of Ukraine to Russia’s own sense of national identity. Dominance over Ukraine has enabled Russia to legitimize its claims to the medieval Kyiv Rus heritage and take its place in European history as the traditional leader of the Slavic peoples. Without Ukraine, Russia finds itself relegated to the fringes of Europe, both physically and figuratively.

Ukraine declared independence in 1991, but the country is still fighting for the right to decide its own fate. Today’s war in eastern Ukraine, along with Russia’s wider hybrid war against the entire Western world, are the latest episodes in the unraveling of the Soviet empire. I was born in 1989 and am part of Ukraine’s independence generation. Since reaching adulthood, it has become clear to me that Ukraine failed to make a decisive break from the old empire. The political independence achieved in 1991 was only part of a broader process that should also have included the creation of a rules-based order and integration into the Euro-Atlantic world. The Baltic states accomplished these goals and are now prospering as EU and NATO member countries. Meanwhile, Ukraine continues to pay the price for its failure, with the country at war and large swathes of Ukrainian territory under Russian occupation.

Ukrainians never entirely reconciled themselves with the unfinished business of 1991. On the contrary, the revolutions of 2004 and 2014 were both driven by a desire to make up for the lost years of the post-Soviet period and embrace a recognizably European future as a liberal democracy. During the same period, Russia has moved in exactly the opposite direction. Following a brief flirtation with democracy in the 1990s, Moscow has spent the past two decades returning to its authoritarian roots and reasserting its influence throughout the former Soviet empire. Today’s Russia may not be as powerful as the USSR once was, but it shares many of the same impulses to oppress all opposition and dominate its neighbors.

Almost thirty years on from the original demise of the USSR, a new window of opportunity may now be opening in the region. For the past six years, Russia has been waging a low intensity war in eastern Ukraine with the aim of preventing Ukraine from escaping the Kremlin’s orbit. Ideally, Moscow would like to regain full control over its former possession, but the top priority is to prevent a reformed and successful Ukraine from serving as inspiration for Russia itself. Putin is still haunted by the humiliations of the Soviet collapse and lives in fear of a Moscow Maidan protest movement that could spark the downfall of his own regime. This has led to today’s bloody stalemate, with neither Russia nor Ukraine able to advance, while the international community looks on from the sidelines and calls for compromise.

Talk of deadlock is not entirely accurate. Even prior to the coronavirus crisis, there were ample signs of major historical shifts underway in both Russia and Ukraine. Since 2014, Ukraine has made unprecedented progress in decoupling itself from Russia politically, economically, religiously, and culturally. Meanwhile, falling incomes and political stagnation have combined to fuel growing public dissatisfaction inside Russia. Summer 2019 saw a wave of protests over the relatively insignificant issue of opposition participation in municipal Moscow elections. On the eve of the coronavirus crisis, polls suggested Putin’s plans to make himself president for life would face similar resistance.

The pandemic now threatens to amplify these problems and create new difficulties for the Kremlin. Historically, low energy prices have been good for democracy and bad for authoritarianism. With global demand crashing to all-time lows, few expect oil prices to bounce back anytime soon. This creates huge holes in the Russian state budget that will make it increasingly difficult to finance imperial adventures in Ukraine, and could also lead to serious shortcomings on the domestic front. This will violate the unwritten pact at the heart of the Putin regime, whereby Russians agree to accept authoritarian rule in exchange for increasing prosperity.

The current coronavirus crisis creates both opportunities and threats for Ukraine. We should not forget about the unsuccessful coup in Moscow which took place in 1991 at the moment when the USSR was at its weakest. This hardliner coup failed, but it posed a grave threat to the velvet revolutions taking place in Central Europe and the Soviet republics. Putin may favor a similarly hard line response to the current crisis. Based on the trajectory of recent years, any initial shifts in Russia’s political climate are far more likely to be towards greater authoritarianism than democracy. At the same time, as Russia’s new economic realities sink in, the West must remain ready to endorse any indications of a potential democratic transition within the country.

While the world waits for democracy to dawn in Russia, the coronavirus crisis should make it easier to contain the Kremlin. In order to avoid the mistakes of the 1990s, it is vital that the international community acts to bolster Ukraine’s democratic progress and hold Russia accountable for its ongoing aggression. With the Kremlin coffers increasingly empty, now is the ideal time to increase the cost of Moscow’s war in eastern Ukraine and the Russian occupation of Crimea. The final act of the Soviet collapse could soon be upon us, and once again, Ukraine holds the key to the outcome.