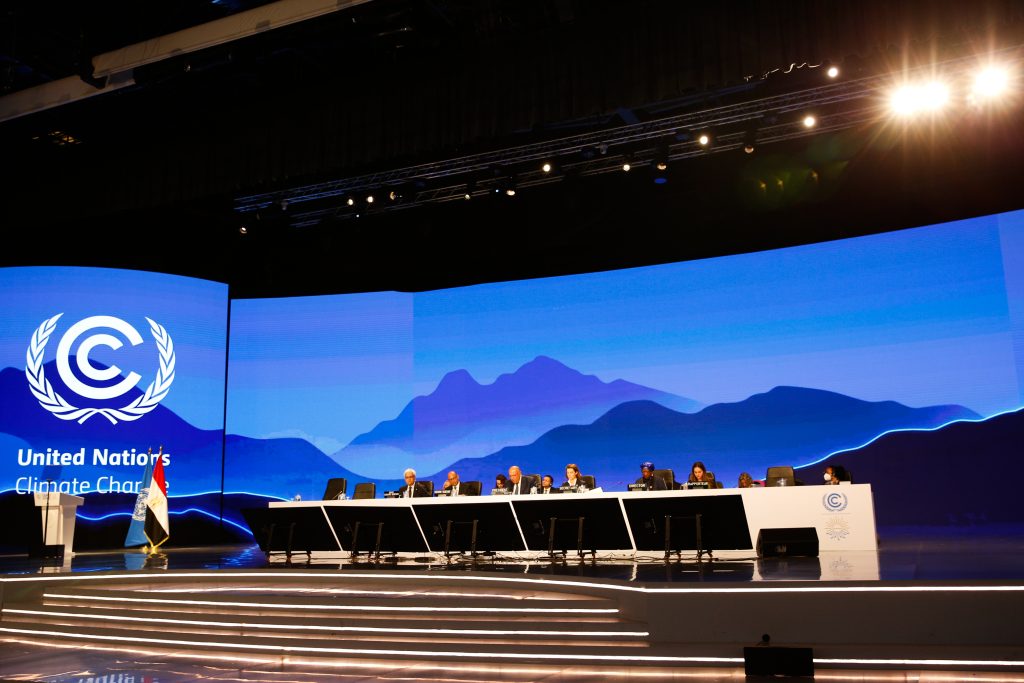 A last-ditch communique is reached, but with skepticism

Requiring an additional thirty-six hours of negotiation, official delegates finally reached a settlement and final communique early Sunday morning. The deal is underpinned by the landmark agreement to create a fund for climate compensation, bringing a nearly three-decade journey for “loss and damage” closer to the finish line. Even if details are sparse regarding contributions to the fund and the criteria for disbursement to vulnerable or impacted nations, bringing forth a commitment from two hundred participating countries is representative of the amount of influence the Global South has wielded throughout the past two weeks.

The disappointing absence of increased emissions reduction targets in the communique is an indicator of how the needs of the developing world have underpinned this COP. Ambitions for economic development amidst a global energy crisis have given enough influence to global oil and gas producing states that room for a significant push to reduce the role of oil and gas in the energy mix has been significantly limited.

That energy security loomed large in this year’s conference should instead be seen as a boon for deploying a diverse range of decarbonizing energy solutions, rather than a detriment. In fact, a draft cover decision on Thursday contained one piece of wisdom in particular, stipulating that resolving the energy crisis will require “immediate and massive deployment of all available clean and efficient energy technologies.” The text of the final cover decision emphasized the “importance of enhancing a clean energy mix, including low-emission and renewable energy.” While this notably opens the aperture to rhetorically include a broad range of technologies such as nuclear, hydrogen, and carbon capture, it is also seen as leaving room for gas.

COP27’s status as Africa’s COP has prompted an overdue shift towards empowering nation-state actors on the African continent to lead their own energy transition on the road to net-zero. This was exemplified in Frans Timmermans’ Wednesday press conference, where he acknowledged that “gas can play a transitional role” in Africa’s energy transition, a development which was welcomed by African Union members. The bloc had been calling for the capacity to develop their gas reserves for domestic use, amid a surge in interest from European importers, to aid the effort to provide energy access to over 600 million individuals on the continent and industrialize their economies in tandem with the accelerated deployment of renewable energy resources.

Nonetheless, there remains an urgent need to drastically reduce global emissions and the failure to make some progress on that front has clearly weakened confidence in the COP process. As noted by Timmermans over the weekend, “Many parties—too many parties—are not ready to make more progress today in the fight against the climate crisis,” he noted after reaching the COP27 agreement. The final deal “is not enough of a step forward for people and the planet.”

Progress made on the sidelines

However, there are still points for optimism outside of the official COP process as the conference came to a close. Thursday emerged as a particularly productive day as a Global Methane Pledge Ministerial was held. Here it was announced that more than 150 nations had now become signatories to the pledge, an increase of roughly fifty since COP26 (even if China and India are still significant outliers).

Also on Thursday was a formal meeting between Xie Zhenhua and John Kerry, following the meeting between President Joe Biden and Xi Jinping on Monday at the G20 Summit in Indonesia. While it’s an unfortunate retread of the progress that was made last year in Glasgow, getting the world’s largest economies back on track for a formal climate dialogue is a critical piece of the climate puzzle.

Another highlight is the progress being made on Just Energy Transition Partnerships, which has accelerated over the previous two weeks. This includes the official launch of the ambitious new JETP by the International Partners Group (the United States, the G7, Japan, Denmark, and Norway) to assist Indonesia in phasing down its coal-fired power generation. The agreement is the largest single-country climate finance partnership, in a model of public-private collaboration—with $10 billion USD being routed from public sources, and $10 billion being routed from a consortium of private financial institutions. This area also saw the arrival of an investment plan for South Africa’s JETP, and increased interest in JETP deals for additional middle income countries Vietnam, Senegal, and India.

The outlook for Paris: Sluggish, but positive

COP27 concludes not having lived up to its “implementation COP” billing. The absence of widespread action to drive forward the ambitions set in Glasgow is insufficient to meet the urgency of the moment—particularly in a year where the impacts of climate change have only accelerated.

A needed reframe of the COP process may now be on the horizon, but Sharm el Sheikh may have created the opportunity for the UNFCCC to do so effectively and equitably. An energy crisis has triggered closer collaboration between Global North and South, and walls between the energy industry and climate action camps are also being broken down as the conference gathers an ever-wider array of stakeholders engaging in constructive dialogue in an era of “post-denial.” Progress is inexcusably slow compared to the pathways and ambitions set forward in Glasgow, but the legacy of COP27 will be the opening of an opportunity to build on the inclusivity of Sharm el Sheikh and ensure a “whole-of-system” transition is accomplished.

Partner perspectives: In emerging markets, partnerships and proof points are key to driving the energy transition

COP27 is an opportunity for emerging economies to lead the energy transition. Public-private partnerships can help drive progress towards their goals.

Partner perspectives: The next unlock: Why software is key to the energy transition

The energy transition requires scale, but it also requires speed. Through the marriage of human ingenuity with data and computing power, software integration can enable the acceleration of electrification and decarbonization, moving the world closer to loftier climate ambitions.