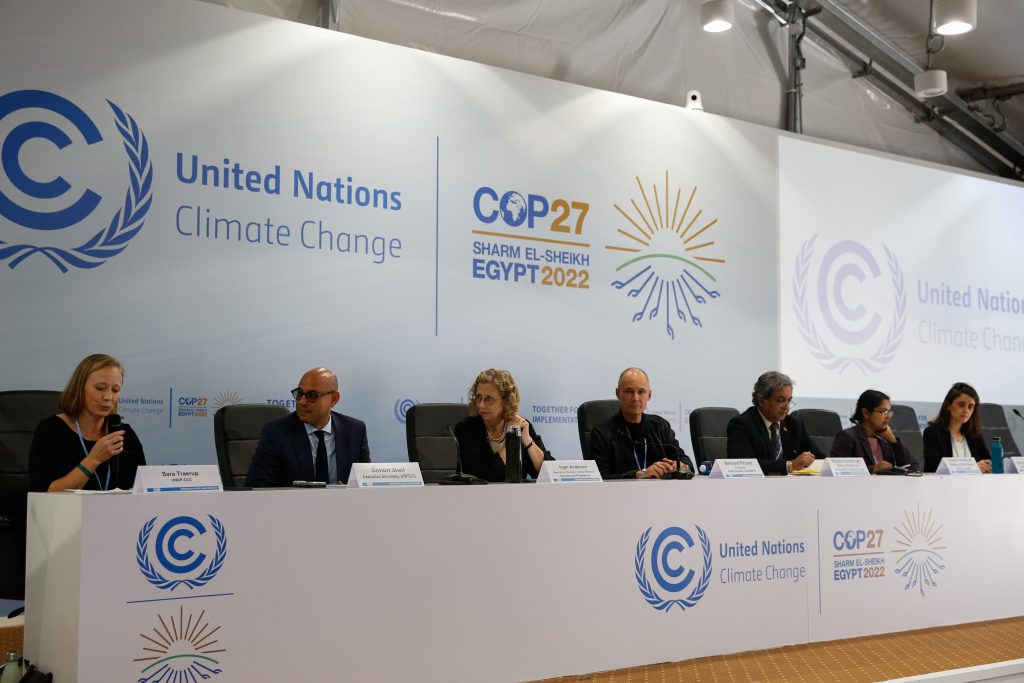 As COP27 reaches its midway point, technical discussions are set to gain speed in Week 2. The twin realities of an energy security crisis and the sweeping impacts of climate change on the developing world remain at the forefront of discussions throughout Sharm el Sheikh. The multi-stakeholder drive to surmount both challenges is drawing stronger linkages between climate action and energy security, opening new avenues for collaboration between governments, civil society, and industry.

US climate leadership is achieving legitimacy through action

Midterm elections at the start of COP27 served only to further energize a US delegation already operating with confidence following passage of the Inflation Reduction Act (IRA). President Biden, Speaker of the House Nancy Pelosi, Special Presidential Envoy for Climate John Kerry, the Director of the National Economic Council Brian Deese, and many others arrived in Egypt emphasizing an optimistic outlook for the energy transition in the United States, while underscoring the need to unlock “trillions” in private financing to replicate US momentum in the developing world. The steadfast presence of US congressional delegations from both sides of the aisle further reinforced America’s commitment to addressing the climate crisis.

As World Resources Institute’s Dan Lashof highlighted during a Global Energy Center “Ambitions for All” fireside chat, this should be seen as “COP1” for the United States—for the first time, US delegates have been capable of espousing domestic action as a model to the world. It is evident on the ground in Sharm el Sheikh that the escape velocity of the IRA and Infrastructure Investment and Jobs Act (IIJA) are helping to reinforce US credibility in negotiations and legitimizing conversations throughout COP27 about translating ambitions into action. The addition of cement industry to the First Movers Coalition, the proposed launch of a $15 billion USD Just Energy Transition Partnership (JETP) in Indonesia, and the informal reopening of US-China climate collaboration following a meeting between Secretary Kerry and Xie Zhenhua are important signposts of how US engagement is a critical momentum-builder. The United States, however, remains a laggard in climate finance, and reaching President Biden’s target of $11.4 billion USD in international climate finance by 2024 will be complicated, at best, if a divided congress materializes, as many political analysts anticipate.

No longer a Western-led narrative

The introduction of “loss and damage” to the COP agenda illustrates how the global south has successfully used the conversation in Europe and the West around energy security following Russia’s invasion of Ukraine to underscore the need for access to sustainable energy resources that enable economic growth. Gulf leaders built upon the developing world’s cry by publicly drawing attention to their role in providing reliable supplies to markets, further propelling a conversation around sustainable energy access to the fore of the “African COP.”

African leaders haven’t minced words, with climate finance increasingly seen less as a request and more as a demand. The chairman of the African Union, President Macky Sall of Senegal, has made the call to double the climate finance pledge of $100 billion USD per annum which was made at COP15.

While many saw the conversations around loss and damage as one of the trickiest corners to navigate headed into the COP, the inclusion of the agenda item passed quickly at the start of this conference. The Global North, it seems, won’t leave Sharm without some level of accountability. The goal of $40 billion USD per annum for adaptation finance which was agreed to by OECD countries at COP26 has been resonating as an insufficient benchmark at side events and in the blue zone.

All to say, the hard conversations which have often been missed or dodged at prior COPs are now front-and-center. As discussed earlier this week, the transition from the COP to a broader convention of stakeholders is representative of this dynamic—representation from corporate stakeholders across the board, and from all sectors, including constructive dialogue from oil and gas supermajors, shows a desire to understand and be a part of the transition. It is necessary for policymakers and the private sector to work alongside each other to reach net-zero, and COP’s larger scope is a true reflection of the scale of the effort required.

Overall, the twin realities of a global energy security crisis and a developing world at the forefront of a majority of the worst impacts of climate change has created an opportunity to better integrate the policy spheres of climate action and energy security.

Partner perspectives: In emerging markets, partnerships and proof points are key to driving the energy transition

COP27 is an opportunity for emerging economies to lead the energy transition. Public-private partnerships can help drive progress towards their goals.

Partner perspectives: The next unlock: Why software is key to the energy transition

The energy transition requires scale, but it also requires speed. Through the marriage of human ingenuity with data and computing power, software integration can enable the acceleration of electrification and decarbonization, moving the world closer to loftier climate ambitions.

Global Energy Center experts are on the ground at COP27. Here’s what they observed over the first two days.