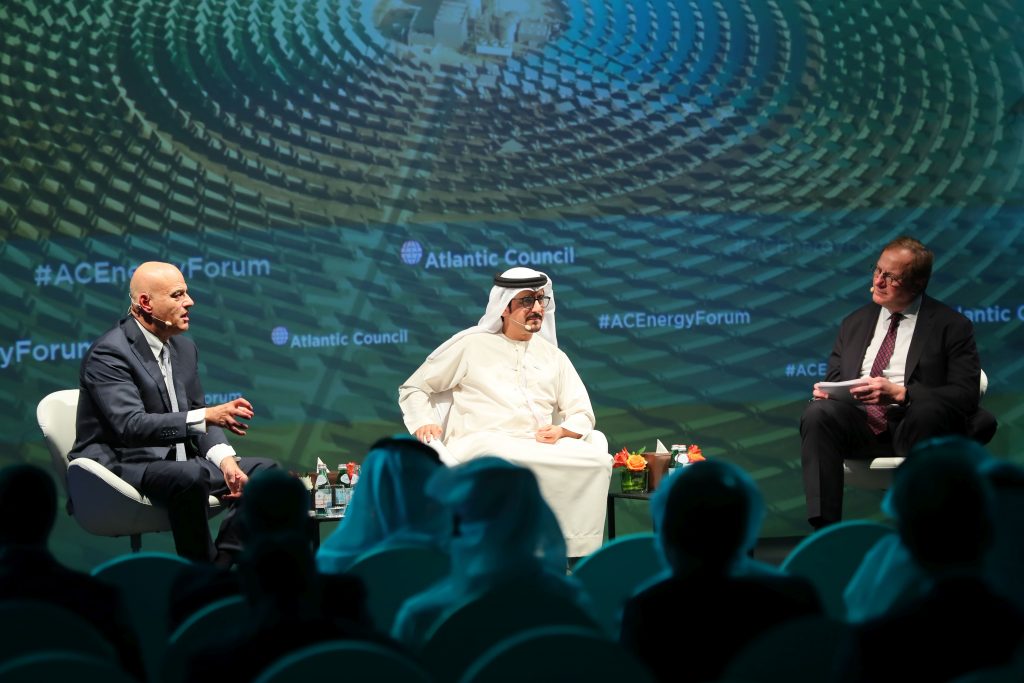 At the Atlantic Council’s recent Global Energy Forum in Abu Dhabi, the global energy transformation and diversification in energy and power markets were recurring themes. A new report from the International Renewable Energy Agency (IRENA), A New World: The Geopolitics of the Energy Transformation, helped to frame the discussion of these themes. The report argues that the emergence of economically competitive renewable energy sources is fundamentally changing the nature of energy geopolitics by driving changes in import and export dependency on oil and gas, as well as creating new leaders and international alliances in clean energy technologies, reducing the role and leverage of Organization of the Petroleum Exporting Countries (OPEC) countries, and furthering the decentralization and democratization of the energy system.

Furthermore, the evolution of the renewable energy sector intersects with three additional major transitions: the shift in major energy demand (and markets) toward non-Organization for Economic Cooperation and Development (OECD) countries, the increasing electrification of energy systems, and the general shift toward the natural gas sector, with its implications for coal substitution.

The past decade has seen a rapid growth in renewable energy, especially in the electricity sector, stimulated by policy incentives, as well as declining costs and technological innovation. These economic factors, along with energy security and environmental policy priorities, have motivated countries to pursue energy diversification with a significant role for renewable energy. Renewables, including large and small hydropower, accounted for about a quarter of global electricity generation and 10 percent of primary energy demand in 2017, according to the BP 2018 Statistical Review of World Energy. Moreover, Bloomberg New Energy Finance (BNEF) notes that global investment in renewable energy has exceeded $300 billion for five years in a row. And their Emerging Markets Outlook 2018 report concludes that new capacity additions of renewables in developing countries exceeded that in industrial countries.

The shift in the locus of energy growth to developing countries has been underway for many years and will continue to be driven by relatively faster economic growth, urbanization, and population growth in these regions. In just the short span of seventeen years, the share of the non-OECD countries’ global primary demand has grown from 42 percent in 2000 to 58 percent in 2017. The phenomenal doubling of Chinese primary energy consumption over 2000-2010 was clearly a determining factor in non-OECD countries overtaking OECD countries in 2007. And China’s government-financed expansion in renewable energy has also dominated the renewable energy transition and is a major reason for the fall in prices, especially for solar photovoltaics.

Developing countries are giving special attention to growing their electricity sectors and are critical drivers of the third transition—the increasing electrification of the global energy system. The International Energy Agency (IEA) World Energy Outlook 2018 (WEO) highlights the growing importance of electricity in primary energy and estimates that developing countries will account for 90 percent of electricity growth to 2040. Efforts to provide electricity to the estimated 993 million people who lacked service in 2017 will contribute to this growth, as will electrification of transportation and growing digitalization. Mobilizing sufficient international and domestic capital to meet these growing demands will be a challenge, given the governance challenges and political risks in many of these developing countries.

In addition to the transformation of the power sector, the IEA points to the shale revolution and US ascendancy as the world’s leading oil producer and a major liquefied natural gas (LNG) exporter as fundamental drivers of global energy market development. The availability of lower-cost LNG combined with the emergence of smaller and more flexible Floating Storage Regasification Units (FSRUs) is allowing countries to diversify their energy mixes rapidly. We have seen the impact of the shale revolution on reducing both coal use and emission levels in the US power sector. The pace of gas substitution, along with renewables, in displacing coal in China and India will likewise be critical to global climate change efforts. And with the growth of renewables comes a need for greater flexibility in managing intermittency and grid operations. Gas can serve this purpose, while also contributing to achieving lower carbon economies.

Although the renewable energy transition is indeed creating new political dynamics, it is important to consider all four of these transitions in assessing the future geopolitics of energy. With the dominant growth of energy demand in the developing world, the aggressiveness with which developing countries pursue decarbonization strategies will greatly influence future demand for oil and gas. These choices will be especially important for the Asia-Pacific region, which will account for as much as half of future energy demand. Competition to capture new markets for advanced energy will be intense among industrial countries. This includes China, with its aggressive export and infrastructure financing, and other countries that will likely seek to expand domestic content and establish local production capacity for renewable technologies. India will continue its efforts to expand low-cost domestic production and will likely be a significant international competitor in the future. A wildcard in the energy transformation—and global economic competition—will be advanced nuclear power, and whether a new generation of affordable and safe small modular reactors that can compete in the post-2030 timeframe with coal and gas to provide baseload and flexible power to complement growing intermittent renewable systems can be developed.

While the renewable transition is still in its early stages, renewables are likely to continue expanding their role in the global energy mix, with costs continuing to drop. The International Energy Agency’s WEO 2018 projects in its New Policies Scenario that renewables will almost double by 2040 and account for 41 percent of electricity generation and 20 percent of primary energy demand by 2040. Under this scenario, renewables will far outpace fossil fuel generation, especially coal. The United States—with its diverse energy resources and advanced technology base—must lead the energy transformation by example while working in concert with its allies in the global move towards cleaner energy.