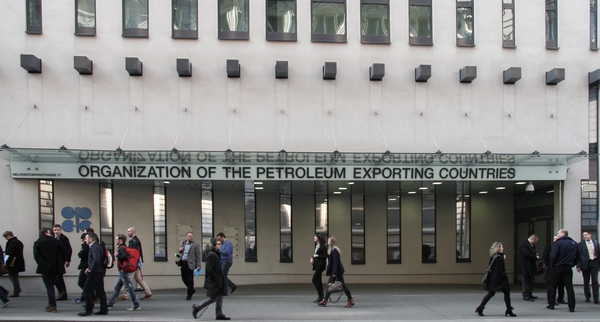 Over the weekend of March 7–8, the breakdown of the previous oil production agreement between Russia and Saudi Arabia led to the broader collapse of the arrangement between the Organization of the Petroleum Exporting Countries (OPEC) and other major oil producers known as OPEC+. Since the outbreak of the novel coronavirus (COVID-19), Saudi Arabia has advocated within OPEC+ for a strong response to declining global demand for oil as a result of what has now been classified as a pandemic. While OPEC members agreed to cut 1.5 million barrels per day (bpd) and OPEC+ agreed to further cuts, Russia viewed cuts in production beyond the current OPEC agreement as premature and declined the requested roughly 300,000 bpd cut. This decision and ensuing price war will likely plague the market for several months.

The breakdown of the Saudi-Russia production agreement was triggered by both political and geostrategic factors. Considering Russian motivation, Åslund emphasized the role that Igor Sechin, CEO of Rosneft, is playing in the decision to abandon the OPEC+ agreement and increase production. Rosneft has been the subject of unrelenting US sanctions for its role in supporting the Maduro regime in Venezuela. With Sechin largely in control of Russia’s energy policy, Åslund argued, the move could be a retaliation to US sanctions. Sechin, who is also personally sanctioned by the United States, likely views the move as a direct attack on US shale gas, which has kept recent gas prices low as the US ramps up production.

What remains to be seen is how long Russia can defer the economic damages that this jump in production and fall in prices will have. According to Åslund, Sechin and Russian President Vladimir Putin seem to be delusional about how weak the Russian economy is. Russian oil has a higher cost of production than Saudi oil, and it is likely that Russia will soon see a serious recession as a result of this recent move, given how much Russian economic growth relies on strong oil exports.

In Saudi Arabia, Seznec noted that Crown Prince Mohammed bin Salman (MBS) is under increasing pressure domestically, and that this move indicates that he is struggling with his flagship Vision 2030 reform initiative. Even his core political base seems to be increasingly fed up with the lack of foreign investment that was promised to accompany Vision 2030. MBS has even recently been cracking down on potential rivals—two princes, both former ministers, were arrested on March 6 amid allegations of treason. Seznec noted, however, that the Saudis, unlike the Russians, have funds to keep the economy going for the next five years, but potential domestic dissent will likely continue as government funds diminish.

Looking at the geopolitical implications of the move, one of the biggest changes is the role of OPEC+. Croft noted that a common goal in Riyadh seemed to be getting the Russians back to the table for a comprehensive OPEC+ response to coronavirus. The Saudi response and ensuing jump in production pushes Saudi production to the highest-ever levels, up to 13 million bpd.

The resulting price war has significant implications for other producers. Croft emphasized that the situation in countries like Iraq, Nigeria, and Algeria—all of which are especially reliant on oil production—could be more severe. Iraq in particular has been plagued with civil unrest and lower oil revenues are unlikely to calm the situation. The implications of coronavirus on the region should also not be ignored. Iran, the pandemic’s epicenter in the region, will feel even more pressure as its remaining oil revenues—already depressed by US sanctions— dry up. Seznec noted that, inspired by the jump in oil prices after the attack on the Aramco Abqaiq facility last year, a cornered Iran could be motivated to take drastic action.

On the domestic front, the US shale industry is an immediate victim in both the price war and of the impacts of coronavirus. Goldwyn noted that this could result in a major restructuring of the US shale industry. He noted that the US “independents,” a class of new US gas companies that are more heavily invested in shale than the oil majors, will particularly feel the impacts of this price war. He also noted that in the long term, it could be possible for some oil majors that are already invested in US shale, like Chevron, to eclipse smaller players, especially if land leases come up for auction. The resulting industry would likely be more resilient as a result, though the long-term impacts of coronavirus are still unknown.

With the extent of coronavirus’ impact on long term oil demand still unknown, there is no easy off-ramp for this price war, especially before the next OPEC meeting in June. Until then, the prices will likely remain low as Russia and Saudi Arabia continue to pump oil into a cool market.

John Soughan is an intern with the Atlantic Council Global Energy Center.

Last week’s breakdown of OPEC+ meetings in Vienna has turned a demand side driven decline in oil prices caused by the impacts of Coronavirus into an oil price war between two oil producing giants, with US shale production the ostensible target. If the standoff continues, however, the price war might ultimately do more harm to the Saudi and Russian economies. With increasing uncertainty about the depth of Coronavirus’ impact on global growth, the price war might also contribute to a sharp decline in the global economy. Helima Croft, David L. Goldwyn, Jean-Francois Seznec, Anders Aslund, and Randolph Bell discuss ongoing market volatility, the origins of the crisis, what’s next for US shale, and the implications of it all for energy and geopolitics

While researchers race to develop a vaccine for the disease, focus must turn to “non-pharmaceutical interventions,” such as “community distancing, community mitigation, school closure, and isolation of patients,” Thomas P. Bossert said on February 28. “Once the spread starts getting to 1 percent of the population, these non-pharmaceutical interventions, don’t work,” he explained.