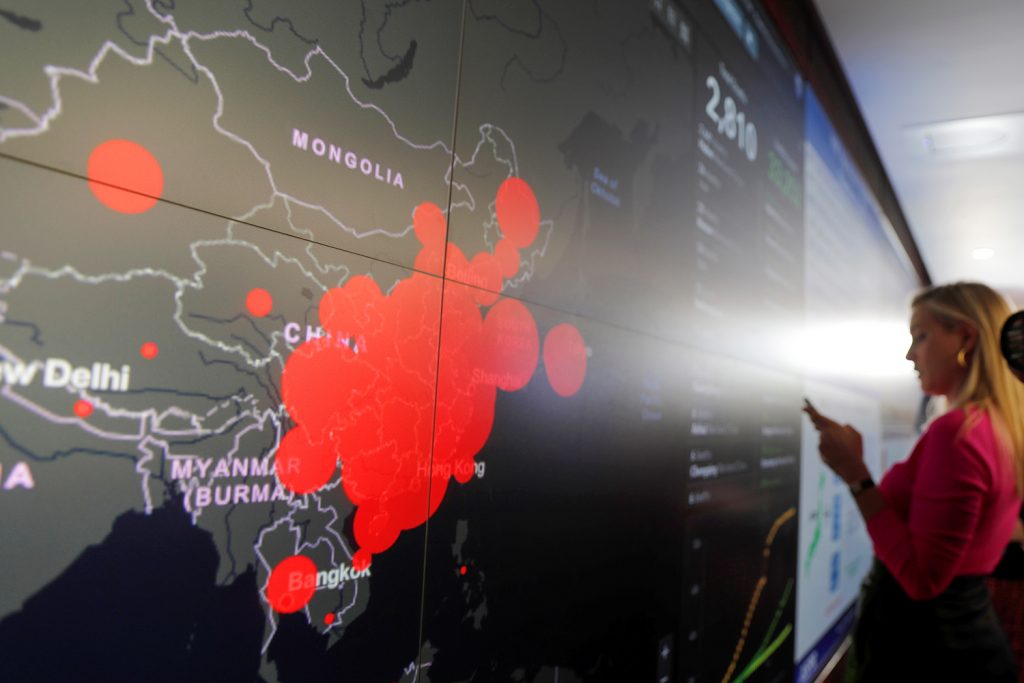 As fears grow about the continued spread of the novel coronavirus (COVID-19), policymakers at the global, national, and local level are considering when to enact more dramatic steps to slow transmission of the virus.

While researchers race to develop a vaccine for the disease, focus must turn to “non-pharmaceutical interventions,” such as “community distancing, community mitigation, school closure, and isolation of patients,” former US homeland security advisor Thomas P. Bossert said on February 28. Bossert, a distinguished fellow in the Atlantic Council’s Scowcroft Center for Strategy and Security, warned that time is of the essence to implement these measures before the numbers of infections render these policies less effective. “Once the spread starts getting to 1 percent of the population, these non-pharmaceutical interventions, don’t work,” Bossert explained.

Since appearing in China in late 2019, the virus has infected more than 80,000 people in more than fifty countries, according to February 27 numbers. There have been around 2,800 reported deaths from the virus, the vast majority within China. The United States had a total of sixty-one reported cases of COVID-19 as of February 26, according to the Centers for Disease Control, forty-six of whom have been repatriated from quarantine abroad, the vast majority on the Diamond Princess cruise ship. Bossert explained that “we don’t have great surveillance right now in the United States—we were late on getting test kits out.” He added, however, that Dr. Anthony Fauci, director of the National Institute of Allergy and Infectious Diseases, is aiming to get “real diagnostic results” on suspected cases so that US officials “start getting real results from real patients.” Bossert said the quarantine of the Diamond Princess in Japan actually created a “contained controlled environment” from which officials can “develop some [projection] numbers with denominators and numerators that we don’t normally have at this stage of outbreaks of this kind.”

Bossert warned, however, that public health officials and policymakers must be conscious of time as “if we get to a 1 percent spread before we get actual results, we will have waited too long,” noting that there is “some pressure growing on state and local health officials” to use alternative diagnostic methods to identify potential infections, such as California’s decision to monitor more than 8,400 people.

Examples of these non-pharmaceutical interventions that could potentially be needed in the United States are already been rolled out in countries that have seen more infections. Documented cases in Italy, centered around its northern regions, reached more than 600 on February 27. Piero Pelizzaro, chief resilience officer for the city of Milan, explained that the government has already taken significant steps, such as temporarily closing schools and calling for companies to push teleworking for employees. “We have seen a stabilization of people infected by the virus at the moment,” he said, noting that Italy has not suspended the Schengen Agreement for free movement across its borders. He credited the current stabilization with the regional government’s “precautionary approach” focused on reducing commuting and general exposure to the population.

Similar measures have been enacted by Singapore, which has seen ninety-eight cases of COVID-19, according to Lauren Nicole Sorkin, acting executive director of the Global Resilient Cities Network and currently based in Singapore. Sorkin noted that locals in Singapore received regular updates from the government “about the caseload [and] about places in the city state that are infected.” According to Sorkin, “every major office building has thermal screening,” which checks for potentially sick people and citizens are regularly asked to sign travel declarations stating that they have not been to infected areas before entering public buildings. Both Singapore and Italy’s actions should inform the US response, Bossert argued, as “Italy has actually stepped forward and been one of the better examples of taking decisive action and implementing non-pharmaceutical interventions,” while “Singapore and Hong Kong have been held out as examples of doing things quickly, early, and decisively.”

Bossert explained that while the federal government is already doing a good job on intervention on the United States’ external borders—by cancelling some flights and screenings at border points—the situation is reach a “second inflection point” where activity will shift to “the institution of non-pharmaceutical interventions internally.” He explained that it will be on local officials “school administrators, hospital administrators, governors and mayors, [and] business owners,” to make the decisions about when and to what extent to take measures. “I am hopeful,” Bossert said, for “well-coordinated, early, appropriate,” action, noting that officials should focus on “staggering these community mitigation practices,” as “you want to reduce the amplitude of [the infection] curve so that we don’t overrun our healthcare capacity with a steep infection curve.” These measures will hopefully “buy us time to develop a vaccine,” he explained, “which is the real endgame.”  Bossert cautioned, however, that it could be more than a year before a vaccine is deployed.

Sorkin added that these high-level interventions will need to be partnered with individual actions to help prevent spread of the virus. “This is actually the beginning of our trajectory with the coronavirus,” she explained. “It is a virus that we are likely going to be living with as a global community over the medium term,” placing more importance on public information campaigns to take individual actions such as refraining from handshakes, teleworking, and regular handwashing. Sorkin explained that schoolchildren are learning new handwashing songs in Singapore, helping to give a positive message about prevention. “We need to adopt those kinds of positive measures, because this is a virus that requires nonpharmaceutical intervention,” she said. “That means we all have to understand them and have a positive relationship with them and not feel limited by them, but actually feel empowered by them.”

Given the alarming rate at which the novel coronavirus is spreading, it was always only a matter of time until the pandemic reached Africa. Now that it has, how prepared are African governments to contain it?

The growing, global impact of Coronavirus

It’s already clear that the coronavirus impact, though too early to fully measure, will be significant on Chinese and global supply chains, markets and economies; on the legitimacy and the trust enjoyed by the Chinese Communist Party with its own people; and on Asian regional politics and US-Chinese relations, where trust already was in such short supply.

Image: A reporter stands in front of a coronavirus global map during a tour of the "secretary's operation center" as part of a coronavirus task force meeting at the Department of Health and Human Services (HHS) in Washington, U.S., February 27, 2020. REUTERS/Carlos Barria