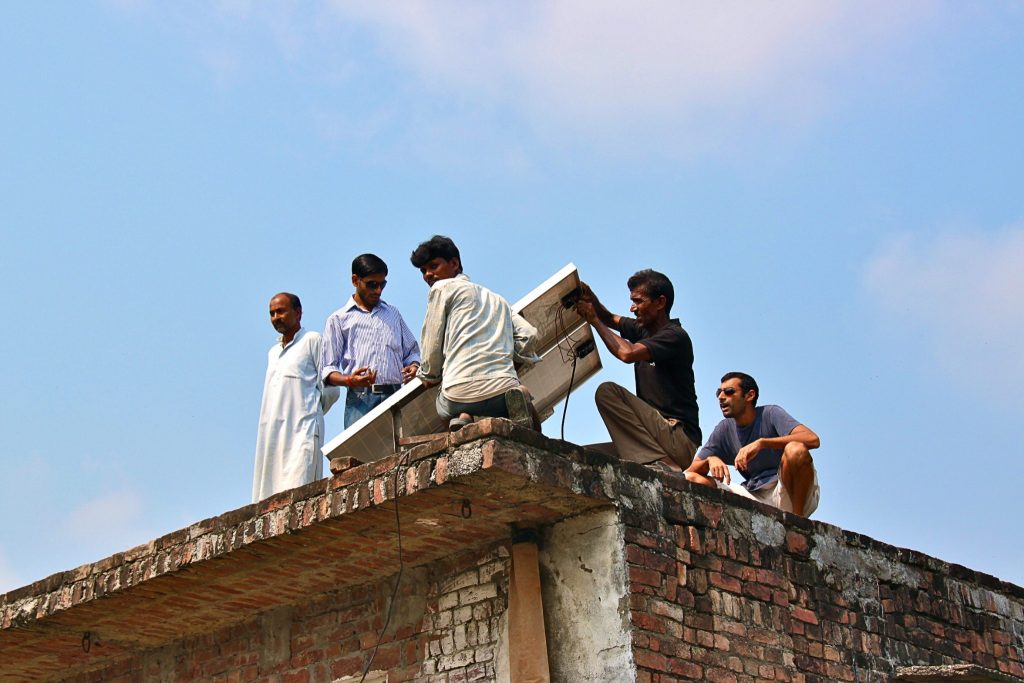 Mera Gao Power (MGP) designed a solar-powered, village-level microgrid to provide electricity to off-grid villages in India. Through the microgrid model, renewable power is generated by solar panels and stored in battery banks that charge during the day and are discharged at night. DIV provided Stage 2 funding for MGP to establish its first commercial microgrids. Flickr/DIVatUSAID (US Agency for International Development’s Development Innovation Ventures program)

Growth in energy demand and electrification

South and Southeast Asia are leading the world in terms of developing countries’ energy growth, with primary energy growth of over 5 percent per annum—India, Bangladesh, and Pakistan are leading the way in South Asia, and Indonesia and Vietnam lead in Southeast Asia. The growth in electricity generation in these subregions has been even higher, and total generation rose to over 2,900 terawatt hours (TWh) in 2018, representing about 10 percent of global electricity generation. These countries are also making significant strides in improving electricity access. At the Atlantic Council’s Global Energy Forum in Abu Dhabi in January 2020, Tawfiq-e Elahi Chowdhury, the power, energy, and mineral resources adviser to the prime minister of Bangladesh, described progress in electricity access, especially the tremendous growth of decentralized solar home and village systems, in his country.

Growing energy demand is leading to increased dependence on imported oil, gas, and coal. With the favorable price and spot market developments, LNG imports have been rising rapidly, especially as domestic gas production has stagnated or declined, especially in Pakistan, India, Bangladesh, and Thailand. Also speaking at the Atlantic Council’s 2020 forum, Dr. Fatih Birol projected that LNG imports in these sub-regions could increase by over 250 billion cubic meters (bcm) by 2040.

Although the two largest electricity consumers in these sub-regions, India and Indonesia, have long been dependent on coal for power (74 percent for India and 58 percent in Indonesia), other countries in the region are continuing to increase their coal capacity additions and are turning to imported coal for their electricity systems. In recently released issue briefs, I discuss the turn to coal power development by both Pakistan and Bangladesh, financed by China, under the Belt and Road Initiative (BRI), and Japan. But governments in Thailand, the Philippines, Malaysia, and Vietnam are also looking to expand coal generation. According to BloombergNEF’s Climatescope 2019 report, six of the top ten developing countries that added coal capacity during 2014–2018 were in South and Southeast Asia: India with 59.2 gigawatts (GW), Vietnam with 11.3 GW, Indonesia with 8.7 GW, the Philippines with 3.3 GW, Malaysia with 2.9 GW, and Pakistan with 2.9 GW. On top of that, BloombergNEF projects that Southeast Asian countries could add 18 GW of new coal capacity by 2025.

Renewables are increasingly important to diversification efforts and most governments are seeking to realize at least 25 percent renewables in their electricity mix in the 2025–2030 timeframe. But the continuing emphasis on coal-fired generation without carbon capture has and will continue to have devastating consequences for global emission mitigation efforts. In 2018, coal power plants in South and Southeast Asia produced over 80 percent of the CO2 emissions in the power sector of these sub-regions and the International Energy Agency (IEA) World Energy Outlook 2019 sees South and Southeast Asia potentially accounting for two-thirds of projected global increases in CO2 emissions from 2018 to 2040. Furthermore, as Dr. Birol noted, the average age of coal plants in Asia is only eleven years and the projected coal plant additions would lock in the global CO2 budget and make efforts to limit global temperature increases exceedingly difficult.

Thus, there is an urgent need to avoid new coal investments. That said, advocating that these developing countries, with their low per capita incomes and relatively low per capita carbon emissions, stop using coal raises serious issues of equity and generational burden. However, the availability of viable gas, renewables, and energy efficiency options has greatly increased over the past several years. For instance, renewables accounted for the bulk (72 percent) of India’s electricity capacity additions over 2018–19. And with new large ultra-critical coal plants based on imported coal obtaining power purchase prices of over $80 per megawatt hour (MWh) (e.g., in Pakistan), these alternatives have become economically competitive.

Nuclear energy is also receiving increased attention as a decarbonization option. India, Pakistan, and Bangladesh are pursuing nuclear energy, with Russian and Chinese financing, and several new generation III plants will likely be online by 2025. The successful efforts of South Korean, US, and UAE companies in completing the four 1400-MW nuclear reactors at Barakah, the first of which is expected to be in operation by next year, and will reduce the UAE’s CO2 emissions and demonstrate that the United States and its allies can provide a nuclear alternative to China and Russia. Although Southeast Asian countries have decided in the past not to pursue nuclear, there are signs that some countries may be reconsidering (e.g., the Philippines). Additionally, the prospects for commercially available small modular reactors in the 2030s may open new avenues for decarbonization that can complement renewables and gas in a diversified mix and provide a viable non-carbon substitute for coal in South and Southeast Asia.

As the South and Southeast Asian region faces increasing energy demand due to both population and economic growth, countries like Bangladesh must meet that demand while facing and overcoming critical environmental and energy security challenges. How is Bangladesh seeking to diversify its energy mix and establish more local and decarbonized power systems, and what are key opportunities for future government and foreign investment?

Although often overshadowed by significantly larger energy systems in India and China, Indonesia is assuming an increasingly important role in international energy markets and global efforts to address climate change. What challenges does Indonesia face in the energy sector and what can be recommendations can be made for policy makers and other stakeholders on strategic priorities?