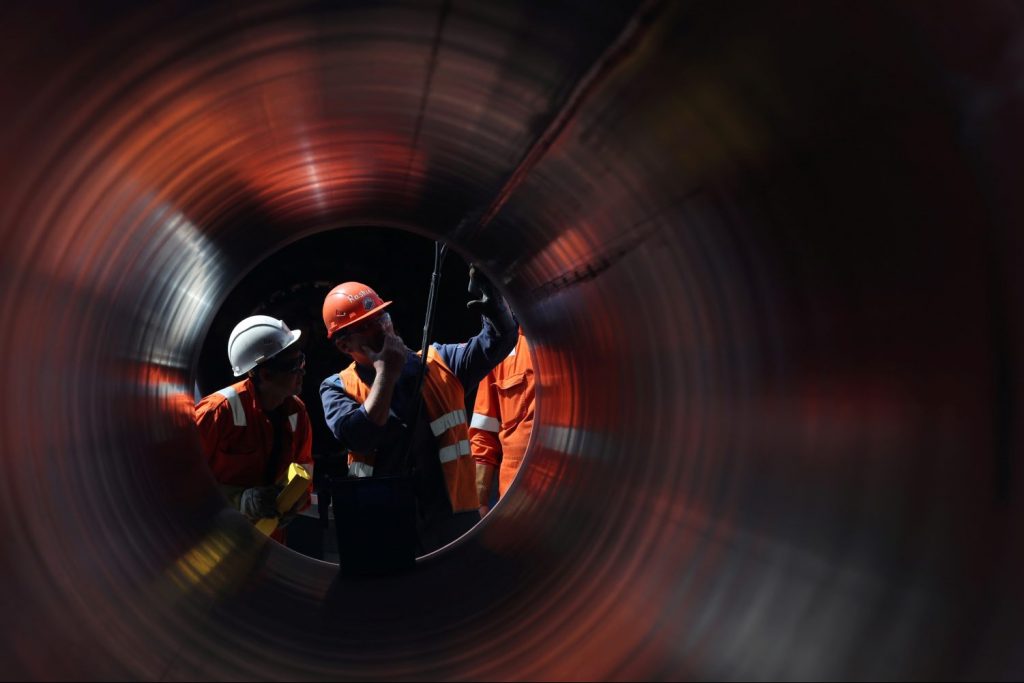 On April 10, 2018, signs emerged that the German government was finally beginning to recognize the geostrategic implications of the proposed Nord Stream 2 pipeline. Standing next to then Ukrainian President Petro Poroshenko in Berlin, German Chancellor Angela Merkel stated: “I made very clear that a Nord Stream 2 project is not possible without clarity on the future transit role of Ukraine…so you can see that it is not just an economic issue, but there are also political considerations.” In one short statement, the chancellor had seemingly repudiated years of arguments that she and other German politicians had made since the pipeline’s announcement: namely, the claim that Nord Stream 2 is “just a commercial project,” rather than what it is—a vehicle to end, or significantly reduce, gas flows via Ukraine, while serving as a conduit of the Kremlin’s malign influence campaign against the transatlantic community.

Fast forward to December 2019. Construction of the Kremlin-backed pipeline continues apace, with only a few months left to stop the project’s short term construction progress. Meanwhile, the current long-term gas transit contract between Russia’s Gazprom and Ukraine’s Naftogaz will expire at year’s end. The negotiations are deadlocked, in large part due to state-controlled Gazprom’s unwillingness to abide by a February 2018 Stockholm Arbitration Tribunal ruling directing Gazprom to pay Naftogaz $2.56 billion in damages for its failure to deliver gas transit volumes under the two companies’ 2009 long-term contract. Gazprom wants Naftogaz to find a “political solution”—i.e., to vacate—this arbitration ruling as one of the prerequisites to a future contract to continue the transit of Russian gas to Europe via the Ukrainian gas transmission system. The impasse raises the specter of earlier Russian gas cutoffs of Ukraine in the dead of winter, only this time the cutoff could last far longer than a couple of days, and it is likely to start just a few weeks from now. Moscow may be hoping that the prospect of a gas crisis will give it sufficient leverage to undermine Brussels’ regulatory measures against Nord Stream 2, discourage legislative action from Washington, and force Naftogaz to relinquish its arbitration win—lest Moscow attempt to simultaneously paint the European Union (EU), United States, and Ukraine as the source of the crisis.

Absent in all of this is Berlin’s role, in spite of Merkel’s stipulation that continued transit of Russian gas across Ukraine must be a prerequisite for Nord Stream 2 to go forward. Unfortunately, each day that the project proceeds in its construction phase, Kyiv loses leverage in its negotiations with Moscow. If Berlin had properly prioritized the future of Ukrainian gas transit, it would have joined with like-minded Allies across Europe to halt the construction of the project until there was a deal in place for robust, long-term transit across Ukraine. For that matter, Berlin could have rejected the development of the project in the first place because it is not aimed at bringing significant new volumes of gas to Western Europe. The design of Nord Stream 2 and its onshore extension, EUGAL, allocates only 9.9 billion cubic meters per year (bcma) of the 55 bcma pipeline to flow in the direction of Germany and points west, while the remainder is set to exit Germany via the Czech Republic en route to Austrian oil and gas company OMV’s gas hub in Baumgarten, Austria. While it is possible that some of those gas volumes will ultimately find their way back to southern Germany via other pipelines, they would simply be replacing the volumes transiting the Ukrainian gas transmission system, which currently flows toward Baumgarten and onward to Germany. Nevertheless, Berlin has often placed the advancement of Nord Stream 2 above other considerations, including Ukrainian transit, the energy interests of its neighbors, and its reputation with many other transatlantic nations wary of the Kremlin’s aggressive foreign policy.

Some Berlin-based Nord Stream 2 proponents claim that the project is an important way to continue cooperation with Russia at a low point in the modern relationship. They invoke the Ostpolitik of the late Cold War, which involved West German cooperation with Moscow on Russian energy exports to Western Europe. One problem with this analogy is that Western Europe arguably needed the additional Russian gas volumes in the 1970s, but that is not the case today. The more significant problem is that former chancellor of the Federal Republic of Germany Willy Brandt’s Ostpolitik was not just about taking favorable policy actions for Moscow in the hope of improved relations. It was also about shoring up relations with Eastern bloc states, including Poland and East Germany. This time around, Berlin’s willingness to cooperate with Moscow on Nord Stream 2 is in opposition to the views of most of its Eastern European Union neighbors, as well as Ukraine, Moldova, and others, including the United Kingdom, Sweden, and Canada. Even Germany, which has not suffered multiple direct gas cutoffs like its European neighbors to the East, has also faced Kremlin-sourced energy injury, such as the 2017 Siemens-gas-turbines-to-Crimea scandal, for which the German company initiated criminal proceedings. From this perspective, Nord Stream 2 is flawed Ostpolitik.

But the situation has become more fraught. The 2019 amendment to the EU Gas Directive provided hope to Europe’s Nord Stream 2 opponents that even if the project were constructed, some of its negative security impacts could be dulled by forcing Gazprom to adhere to EU market liberalization principles in order to gain certification to operate. The directive stipulates that pipelines originating outside the EU that remained uncompleted as of May 23, 2019, like the Russia-to-Germany Nord Stream 2, would be subject to the full force of the gas market liberalization statutes of the EU Third Energy Package, including ownership unbundling and third-party access. Gazprom, through a legal objection against the European Commission made earlier this year by its subsidiary Nord Stream AG, is challenging the applicability of the updated gas directive to Nord Stream 2. This should come as little surprise, since regulations like ownership unbundling and third-party access would challenge the gas pipeline export monopoly that the Kremlin-controlled enterprise holds within the Russian Federation, and would likely result in annual capacity restrictions, while undermining Gazprom’s monopolistic business model.

More concerning to Gazprom and its allies is the likely impact that the EU General Court’s September 2019 OPAL pipeline decision would have to strengthen the hand of Brussels and other EU member states that have been fighting for years to ensure the project does not come into operation. The court ruled that the European Commission, in accepting Bundesnetzagentur’s—Germany’s National Regulatory Authority—move to allow Russian gas from Nord Stream 1 to fill all of OPAL’s capacity, did not account sufficiently and broadly enough for the negative energy security implications of doing so. Such consideration is required under the energy security solidarity principle enshrined in Article 194 of the Treaty on the Functioning of the European Union. Ultimately, the EU General Court ruled that the European Commission did not adequately consider the negative impacts on gas security of supply interests on other EU member states, such as Poland, in its assessment resulting in the 2016 OPAL decision. The study leading to that decision was limited primarily to Germany and OPAL’s connections onward to the Czech and Slovak Republics, thus not accounting for the impacts on and solidarity between EU member states more broadly.

The OPAL ruling will, by extension, have a significant impact on the EU Gas Directive’s effect on Nord Stream 2 and EUGAL. Article 11 of the EU Gas Directive states that the national regulatory authority of the host nation of any particular gas infrastructure project—the Bundesnetzagentur for Nord Stream 2—must assess whether the infrastructure “will put at risk the security of energy supply of the Community.” To greenlight the operation of the pipeline under the gas directive, the Bundesnetzagentur will need to have a certification accepted by the European Commission that shows that the project does not present such risks. On the face of it, the OPAL decision already provides a direct case law example that could open any Bundesnetzagentur decision to certify the pipeline—by arguing that it does not harm the energy security of the EU or other individual member states—to direct legal challenge by the European Commission, or some of the already successful parties of the OPAL case, such as Poland and Lithuania.

Perhaps noting the existential threat that full application of the EU Gas Directive would pose to Nord Stream 2, project supporters appear to be working to fend off any possible future legal challenge that could prevent Nord Stream 2 from operating. On November 13, the Bundestag passed legislation adopting the gas directive update, but in a manner that might one day be used to facilitate Nord Stream AG’s bid to circumvent the impacts of the EU Third Energy Package. Handlesblatt, which provided an extended discussion of the Bundestag’s proposed gas directive adoption legislation, describes Germany’s implementing legislation in this way, stating that by challenging the commonplace definition of “completed” infrastructure, it could bring into question whether Nord Stream 2 actually should be subject to the Third Energy Package at all. The legal loophole inserted in the legislation is that the Bundesnetzagentur could “take into account that the project company already made billions in investment by [May 23, 2019] and had relocated a considerable part of the management.” This facilitates a line of argumentation that, although the pipeline was not physically completed; did not hold all necessary construction permits; and was operationally incapable of conveying natural gas along its extent before the date of entry into force of the EU Gas Directive update, it was “completed” by virtue of financial investments made. Such an interpretation would vitiate the amended EU Gas Directive—an amendment to which all EU member states agreed.

Meanwhile, the article mentions another legal contingency ploy by Nord Stream AG to comply with the gas directive without being subject to the intended impact of the law. This scheme would involve creating a shell company under which Gazprom could sell the last 12 nautical miles of the pipeline as it enters the German territorial sea to avoid having to comply with ownership unbundling requirements. In this scenario, Gazprom would be the sole owner-operator for the remaining more than 90 percent of the pipeline through the Baltic Sea, allowing Gazprom to argue that the gas offtake point could simply be identified as on the Baltic seabed at the boundary of the German exclusive economic zone (EEZ) and territorial sea. This despite the fact that physically, the pipeline is still one continuously operating infrastructure installation. That a single continuous pipeline could effectively operate under two regulatory regimes—one Russian and one EU—is a legal fiction carried a little too far and would set a precedent that would undermine the core objectives of the EU’s own energy market liberalization policy.

Both this argument and questioning the definition of “completed infrastructure” require legal fictions. But perhaps these are fictions that Nord Stream 2’s supporters are willing to pursue, all while Ukraine’s national security interests are dashed and Europe’s energy security is threatened. What is most concerning about all of this is that Germany, which the transatlantic security community hopes to be a stronghold of rules-based multilateralism in an otherwise turbulent time, appears to be refusing the opportunity to lead when it comes to energy security. We can only hope that Merkel, who understands the real threat that Russian President Vladimir Putin poses to Europe, will remember her statements from April 2018 and take action to protect Ukraine and Europe from this energy security threat.

Dr. Benjamin L. Schmitt is the former European energy security advisor for the US Department of State and is a current postdoctoral research fellow at Harvard University. You can follow him on twitter @BLSchmitt

Image: Workers are seen through a pipe at the construction site of the Nord Stream 2 gas pipeline, near the town of Kingisepp, Leningrad region, Russia, June 5, 2019. REUTERS/Anton Vaganov