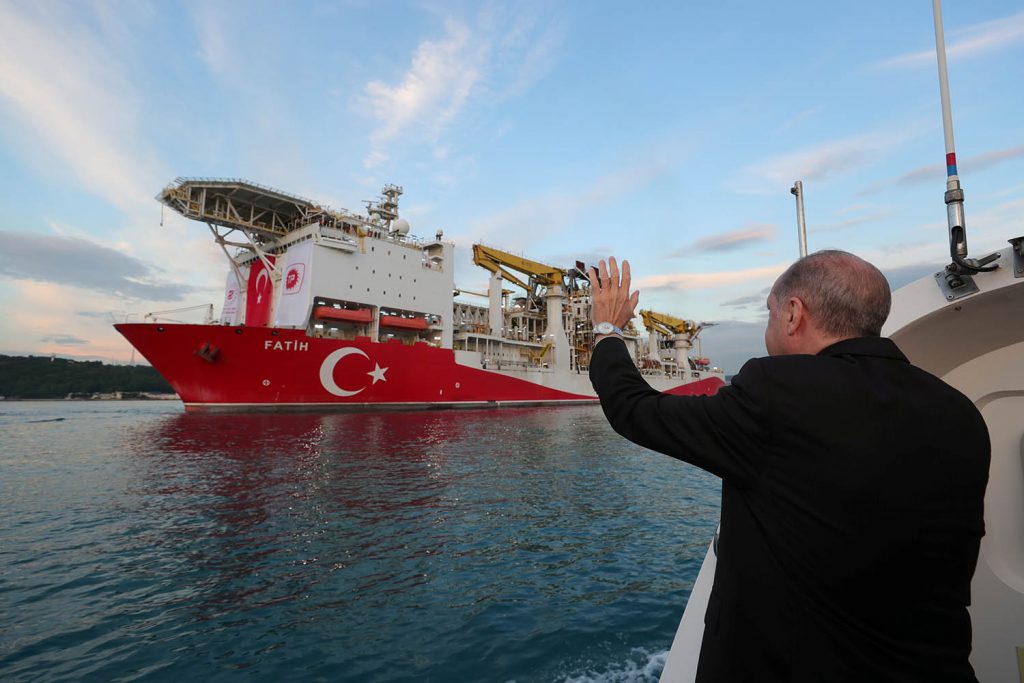 Turkey is a primary destination for US liquefied natural gas (LNG), but a change may be over the horizon. In late August, Turkey’s president Recep Tayyip Erdoğan announced that the Turkish Petroleum Corporation (TPAO)’s drilling ship FATIH discovered a 320 billion cubic meters (bcm) of natural gas reserves in the Black Sea, within the western part of Turkey’s Exclusive Economic Zone (EEZ).

The gas field in the “Tuna-1” zone was discovered at the sea depth of over 2 kilometers in a well that is some 4,525 meters deep. News of the discovery has been enthusiastically welcomed by the Turkish leadership and was hailed as a game-changer, capable of reducing the country’s expensive energy import bill.

The Turkish government announced an ambitious plan to begin production from the find by 2023—the 100th anniversary of the foundation of Turkish Republic. Yet, the fanfare may be premature due obstacles both economic and geological.

Some experts argue that there are too many unknowns surrounding Tuna-1 to justify the market excitement just yet. According to investment banks, the main ambiguity is the economic extractable reserve value of the well, and whether this deposit is sufficient to undertake costly deep-water drilling operations and laying down the pipe.

As the initial euphoria wears off, a sober analysis is needed to determine just how beneficial Tuna-1 can be for the Turkish economy.

Tuna-1 is located some 150 kilometers from Turkey’s western Black Sea coast, and is at the perimeter of Bulgaria’s and Romania’s maritime borders (See here for a map of the discovery). Tuna-1 field is located around 100 kilometers south of Romania’s Neptun Deep block  (84 bcm)—the previous largest gas find in the Black Sea discovered eight years ago by Petrom and Exxon. This physical proximity indicates that Turkey may face upstream difficulties that are similar to Neptun’s during the production of Tuna-1 reserves: WoodMackenzie researcher Thomas Purdie stresses that the Black Sea has a unique morphology. “It’s U-shaped, meaning shallow coastline turns to ultra-deep water rapidly,” he said. “The basin center is deep, cold, and highly anoxic. These harsh, challenging conditions require specialist experience, not currently at TPAOs disposal. The Sakarya development will almost be at the deepest limits of the Black Sea. This is an ultra-harsh environment.”

Given such challenging conditions, experts stress that Turkey needs work with a major exploration and production (E&P) company to exploit the new find. What makes the field so attractive, though, is the potential of additional reserves deeper in the Tuna-1 well. Turkey’s Energy Minister Fatih Donmez said that there are still around 1,000 more meters of drilling to be conducted: “Seismic data shows two more layers of similar reservoir structures below… currently, we are 3,500 meters deep and have cut [into] second important reserve.”

However, Turkey doesn’t seem very keen on working with international E&P majors, at least not along the production sharing model. Donmez stressed that they Turkish Petroleum (TP) will carry out the entire drilling independently, while the segment of pipeline connection to the shore may be subcontracted to an international company.

Wood Mackenzie analysts expect that Turkey would choose to go forward with a subsea development tied back to a shallow water platform and onwards to shore by pipeline. They argue that Turkey’s well-established oil and gas services sector would help TPAO maximize local content in the initial development phase. Yet, TPAO has no deep-water experience, suggesting that international support for the subsea operations is a must.

In some good news for Turkey, the E&P market is now more cost-conscious and discerning: Tuna-1 play may be too small for some.

Wood Mackenzie’s Dr. Andrew Latham, vice president of global exploration, says that “only the best prospects will be drilled, and only the best discoveries will be developed.” Though the fundamental risks in deep-water E&P project including regulatory, resource nationalism, and tax challenges would still be on Turkey, if managed well, the production from Sakarya field can be realized with a lower cost than it would be five years ago.

A boon to the Turkish economy?

Another contentious aspect of the Tuna-1 exploration is the dent it would make to Turkey’s energy imports. Turkey is heavily reliant on piped natural gas and LNG to meet domestic demand. In 2019, Turkey purchased over 45 bcm of natural gas at the cost of $41 billion.

While Turkey is still far from achieving President Erdoğan’s goal of becoming a net energy exporter, the 320 bcm gross reserve estimated in Tuna-1 could meet Turkey’s gas demand for up to seven to eight years. The find would serve to substantially minimize Turkey’s import volumes.

Turkey currently has four long-term take-or-pay pipeline contracts with Russia (Blue Stream until 2025 and Bati Hatti until  2021), Azerbaijan (until 2021) and Iran (until 2026). Until these contracts expire Turkey will continue to import from these suppliers. That being said, Sakarya can provide bargaining power for Turkey to renegotiate the pricing in these agreements. With the Sakarya online, energy experts argue that Turkey can convince Russia to index its current gas prices to spot natural gas price—a proven strategy of European countries.

The Sakarya field is certainly going to change Turkey’s energy security situation. It is highly likely that with further drilling, its reserves will be enhanced. Yet, Turkey needs to analyze its options for this project wisely. Turkey currently does not enjoy a very promising country risk ranking. To attract international majors to Sakaraya, it needs to improve the field reserve indicators and offer a panoply of economic incentives. Only then it can confidently hail the game-changing prospects of the Sakarya find. In the meantime, LNG and piped gas remain a mainstay of its energy imports.

Ariel Cohen, Ph.D., is a nonresident senior fellow at the Atlantic Council and director, Program on Energy, Growth and Security at International Tax and Investment Center (ITICnet.org). He is the Founding Principal of International Market Analysis Ltd.

Talya Yuzucu is a research assistant at ITIC.

Amidst deteriorating US – China relations, energy trade picks up in Q2

By Reed Blakemore and Reid I’Anson

Despite a precipitous decline in US-Chinese relations over the past month and a half, energy trade during the second quarter of 2020 remained robust as positive economic incentives outweighed the diplomatic tit-for-tat currently dominating headlines

As companies face increased pressure to pursue sustainable investing, business leaders around the world are taking action to address their environmental, social, and governance (ESG) risks and opportunities.