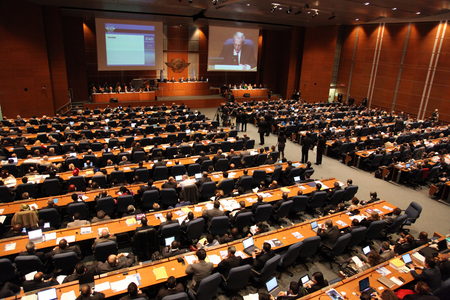 Recent advancements in space technology and commercial space industry promise to spur a dramatic surge in space tourism and research in the coming decades. While space enthusiasts might celebrate the news by calculating whether their retirement funds can be made over as space-jump funds, the bureaucratically-inclined have a good reason to worry: the current system of international governance isn’t capable of coping with a congested orbit.

Alas, conditions for such a feat of cooperation were arguably more favorable then than they are today. The international system had been severely shaken by world war, and was dominated by a small group of great powers that were actively searching for ways to integrate internationally. By contrast, the failure of the international community today to unify over climate change is regularly held up as Exhibit A for the case that the system is dysfunctional.

Yet there are similarities between the two eras as well. Global rivals recognized then, as now, that a new commons represents both commercial opportunity and potential security risk. Then as now only a small number of nations were capable of serious use of the new commons, but forward-thinking planners understood that there would soon be many more. Deep international divides over policy in the commons persist, but the need for standards in navigation, commercial transport, and settlement of disputes are arguably even more universally-recognized today than in the early 1900s, with the economic fates of nearly all nations dependent on smooth international trade.

Even if the will can be found, the negotiation of a worldwide standards regime for space promises to be one of the most difficult challenges ever delivered unto the global bureaucracy. For one, the model of air transportation may not be useful for space. The 1967 Outer Space Treaty prohibits the claiming of sovereign territory in space, while the as-yet-unused 1972 Space Liability Convention sets down standards for accident liability that hold states responsible for all objects launched from their territory. Such a system would be completely unworkable in any era of common commercial spaceflight, and the lack of serious international norms for commercial liability is one of the major risks space companies currently weigh.

To compound the problem, navigation in a crowded orbital system will require a centralized director or institution for the collection and dissemination of data, as well as international strictly-enforced legal requirements for registration of vehicles and filing of flight paths. The status of tourists, who likely do not qualify as astronauts (considered “envoys of mankind” in current international law), in rescue situations will need clarification, as will jurisdiction over potential private space stations. Identifying and removing space debris – already a growing problem – will require coordination among states.

Weaponization of space, an issue that largely receded from the agenda as Cold War fears abated, will become unavoidable when private actors for which governments are not solely responsible are the majority of actors in outer space. Who will – or can – enforce the treaty ban on nuclear weapons in space? Already some proposals to help eliminate space debris, such as a ground-based laser, run the risk of being perceived as weapons and destabilizing international relations.

The Obama administration’s 2010 National Space Policy has its fundamentals right, giving high priority to the development of a commercial space industry and emphasizing international cooperation on regulatory frameworks. The Policy, in contrast to that of the Bush administration, talks about the need for openness and transparency in space operations and appears to open up space for negotiation on arms control. Yet where industry has thrived under consistent attention and funding in the past few years, regulatory frameworks have been all but forgotten.

For now, with commercial space activity still relatively minimal, the international system can afford to avoid the messy process of renegotiating multilateral treaties. If spacefaring nations fail to prioritize the joint development of norms, we may well be facing a future of slow, halting progress towards common civilian spaceflight, or worse, a dangerous period of disarray.

Hanna Camp is an intern with the Council’s Strategic Foresight Initiative.