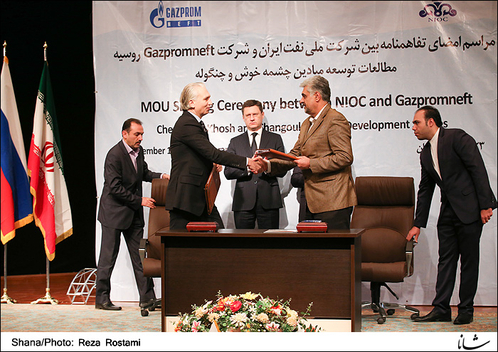 Iran’s substantial natural gas reserves provide Russia with a significant strategic opportunity to solidify its role in the international arena.

Although US secondary sanctions against Iran’s petroleum sector resumed on November 5, Russia will most likely defy them by continuing to invest in Iran’s natural gas sector. Russia may also seek to influence the flow of Iran’s natural gas into the European market, where it could undermine Russia’s political-economic interests if not coordinated with Moscow.

Iran possesses the potential to emerge as a major natural gas exporter that could alter trade relations within the global market, but needs foreign investment. Under the Joint Comprehensive Plan of Action (JCPOA), sanctions relief reopened the door for investment and allowed Iran to plan for and implement growth in its natural gas sector to meet rising domestic demand and free up oil for export in the short term. In the long term, Iran can ensure its survival in a post-oil era by securing a share of the global natural gas market.

Historically, Iran has not been able to export any sizeable quantity of natural gas because of its rising domestic demand and chronic disputes with the United States. Nonetheless, modest production growth will continue even in a sanctions environment due to Iran’s large domestic market, unimpeded natural gas trade to Iraq, and other regional natural gas initiatives. Iran’s geographical position and energy reserves make it enticing for Europe and the Far East, which are looking for a long-term solution to increase energy security.

Since Iran’s reintegration into the global economy in 2015, following the JCPOA, Russia has invested in four of Iran’s southern fields in the Persian Gulf and two liquefied natural gas (LNG) projects in the South Pars fields that would allow Iran to export LNG outside the Middle East. Iran has pursued an LNG capability for many years, but these projects stalled due to the last round of sanctions in 2012 and may be put on hold again if the technology cannot be acquired under resumed sanctions. However, the threat of sanctions has not dissuaded Russia from investing $50 billion in Iran’s oil and natural gas industries.

Energy security is vital for Russia’s economy and geopolitical standing. Russia’s natural resources account for nearly 80 percent of its total exports and 51.7 percent of tax revenues. Russia possesses the world’s largest proved natural gas reserves totaling 35 trillion cubic meters (TCM), an approximately 18.1 percent share of the world’s proved reserves. The Russian natural gas subsidiary Gazprom sells over two-thirds of its natural gas domestically, but over two-thirds of its revenues come from exports. Without revenues from the energy sector, the Russian Federation would not survive.

Beyond the economic benefits, President Vladimir Putin views Russia’s vast natural gas reserves and state-owned pipeline infrastructure as strategic assets that can promote its political ends. Early in his tenure, Putin reorganized the energy sector, including Gazprom, under state control and has continued to personally involve himself in natural gas diplomacy.

Russia seeks to maintain control of the European market not only to promote its economic growth but to maintain geopolitical leverage. Russia’s energy objectives with regard to the European market encompass four lines of effort: (1) secure long-term demands from major markets; (2) foster strategic ties with influential states such as Germany, France, and Italy; (3) safeguard against potential competitors; and (4) maximize profit by expanding access to consumers. Russia’s expansion efforts through the NordStream 2 and TurkStream pipelines have allowed it to block or, at least, impede European diversification. Turkey is the geographical nexus for Europe’s Southern Gas Corridor. The corridor aims at diversifying Europe’s natural gas supplies away from Russia, but TurkStream ensures Russia’s supplies remain prominent as other suppliers converge in Turkey.

The current marriage of convenience between Russia and Iran stems from their desire to extend each state’s operational reach and increase influence in the Middle East to resist the West. Russia and Iran will likely never be true holistic allies across multiple sectors. However, Russia views Iran as a provisional tool to counter the United States and safeguard its economic interests. Russia seeks to be an equal and proactive participant on a global scale, ensuring its energy interests are adequately represented among relevant stakeholders and competitors. Russia’s revenue from its energy sector directly preserves its sovereignty and promotes its comparative advantage.

The potential to monetize Iran’s 33.2 TCM of proved natural gas reserves, second largest in the world behind Russia, is very relevant to Russia’s supply and demand calculus. The introduction of Iranian natural gas into the European market without Russia’s direct support would decrease Europe’s dependence on Russian natural gas. In early 2017, representatives from Gazprom participated in the Iran LNG & Gas Partnerships Summit, in Frankfurt, Germany to analyze Iran’s strategic plans to monetize its natural gas resources and decide how best to respond.

Cooperation on Iran’s natural gas reserves provides a strategic opportunity for both Russia and Iran. Russian investment seeks to alleviate the hardship of Western sanctions, led by the United States, on both countries. Cooperation would afford Iran a means to continue its monetization efforts in a stagnant economy and advance its grand strategy of regional hegemony, while Russia secures a voice in Iran’s natural gas export routes and receives a monetary and geopolitical return on its investment.

In the process of cooperating with Iran to ensure economic prosperity, Putin may have the opportunity to achieve diplomatic victories by persuading Iran to abandon its nuclear proliferation, an outcome that would decrease international tensions and showcase Russia’s role as a key player in the Middle East and beyond.

The marriage of convenience between Russia and Iran has only grown stronger in recent years as they challenge a world order that has favored the West. However, their natural gas interests collide in Turkey.  Geographically, Turkey serves as Iran’s gateway to Europe and another route for Russia’s natural gas supply to envelop the European market. The United States should support other regional natural gas suppliers to Turkey and continue to challenge TurkStream, while expanding its LNG trade in the European market. The United States can strategically contain Russia and Iran by supporting regional competition to give European countries options other than succumbing to long-term Russian energy contracts.

US LNG could theoretically help lessen Europe’s dependency on Russian natural gas, but current capacity, price, and the relative trade deficit make the arrangement incompatible. Russia exported 189.3 billion cubic meters (bcm) to European countries in 2017. As of early 2018, US LNG export capacity was 32 bcm a year, with plans to increase this capacity to 94 bcm and 100 bcm by 2020 and 2022, respectively. If 100 percent of US LNG exports went to Europe, the United States could decrease Russia’s natural gas market share in Europe by approximately 50 percent in 2020. This is a very optimistic estimation since the United States also seeks to offset trade deficits with China.

Nonetheless, on July 25, European Union President Jean-Claude Juncker and President Donald Trump agreed to increase US LNG exports to Europe, and subsequent talks continue to affirm the commitment. However, given that the price of US LNG exports to Europe is $6 to $7.50 per million British thermal units, as compared with $3.50 to $4 for Russian natural gas, the United States will either have to convince European nations to pay more for energy security or subsidize the overall costs of US LNG to minimize Russia’s market share.

Major Thang Q. Tran is an Army Special Forces Officer who is currently pursuing a Master’s Degree in Defense Analysis (Financial Management) from the Naval Postgraduate School in Monterey, California, while also pursuing a Master of Business Administration through Mississippi State University.  He has served with the 10th Special Forces Group (Airborne) and has multiple operational deployments in support of Operation Enduring Freedom and the Resolute Support Mission in Afghanistan. The views expressed in this article do not reflect the official policy or position of the Department of Defense of the U.S. Government.

Major Alan W. Lancaster is an Army Special Forces Officer and recent graduate of the Naval Postgraduate School in Monterey, California, with a Master’s Degree in Defense Analysis (Irregular Warfare). He has served with the 3rd Special Forces Group (Airborne) and has deployed in support of Operation Enduring Freedom and Resolute Support Mission. The views expressed in this article do not reflect the official policy or position of the Department of Defense of the U.S. Government.