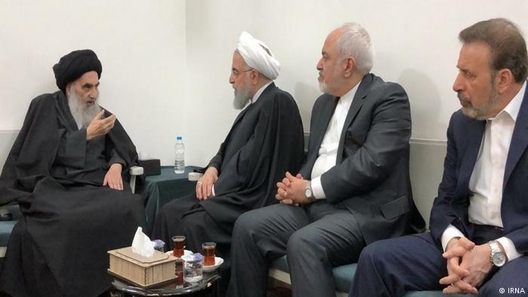 As far as photographs go, it’s a rather inartful moment. Three aging men dressed in dark clothes sit in a spartan room with small glasses of heavily-brewed tea and a tissue box resting before them, as they engage in conversation.

But to Iranians and Iran-watchers the March 13 meeting marked a historical moment. The image of Grand Ayatollah Ali al-Sistani seated with Iran’s President Hassan Rouhani and Foreign Minister Mohammad Javad Zarif graced the front pages of almost every Iranian newspaper the next day.

Looking spry and alert, 88-year-old Sistani, the highest Shia religious authority in Iraq and among Iran’s most popular marja al-taqlid, or source of emulation, speaks intently to Rouhani, who listens closely along with Zarif, and Mahmoud Vaezi, the Iranian president’s chief of staff. There’s no need for an interpreter. Sistani, born in Iran, is fluent in Persian and retains Iranian nationality, despite being offered an Iraqi passport.

It was the first time Sistani has ever met with an Iranian president, though notably, he has met previously with Zarif and both parliamentary speaker Ali Larijani and his brother, the former judiciary chief, Sadegh Larijani—scions of a well-known clerical family.

Predictably, the meeting was spun by various players as vindication for whatever ideological position they hold. Brian Hook, the US Special Representative for Iran, in an interview with Arabic channel Al-Hurra questioned Rouhani’s motive for visiting Iraq. He added, “What Iran would ultimately like to see happen is Iraq turn into a province of Iran so that they can create a military highway across the northern Middle East that the Islamic Revolutionary Guard Corps can use to ferry missiles and weapons.”

Some Iraqi sources claimed Sistani used the opportunity to urge Iran to stay out of Iraq’s affairs and to respect its sovereignty. Sistani reportedly told Iran’s president that he welcomed “any steps to strengthen Iraq’s relations with its neighbours. . . based on respect for the sovereignty of the countries and no interference in domestic affairs.” A source quoted by Baghdad Today interpreted the discussion as a “necessity of distancing Iraq from any regional or international conflict.”

Hardliners in Tehran celebrated the moment for exactly the opposite, describing it as a show of unity between Tehran and Baghdad in the face of pressure by US conservatives. Hardliners have repeatedly sought to incorporate Iraq into their vision of an “axis of resistance” against Washington’s hegemony that includes Syria and Lebanon as well as their neighbor to the east. “America and infiltrators angry over president’s fruitful Iraq trip,” said a headline in the hardline newspaper Kayhan.

Reformists in Tehran claimed the meeting showed Sistani’s support for Rouhani and his administration’s relatively moderate domestic and foreign policies. They pointed to the fact Sistani in 2008 refused to meet former President Mahmoud Ahmadinejad, who was seen as a representative of hardliners and the Islamic Revolutionary Guard Corps, while welcoming his rival, the late Ayatollah Akbar Hashemi Rafsanjani, the following year.

Indeed, within the Shia clerical establishment Sistani has long been seen as an opponent of the Velayat al-Faqih, or the Guardianship of the Islamic Jurist, espoused by the Islamic Republic’s founder Ayatollah Ruhollah Khomeini to justify rule by clergy.

In fact, Sistani and his handlers—hustling within the ancient, narrow alleyways surrounding the Imam Ali shrine in the holy city of Najaf—have been enormously picky about whom he meets with, who is given a mere quick handshake, and who gets to be seen conversing with the cleric in a photo op (just try to find a picture of Sistani having tea with one of the Larijanis). For example, he has repeatedly refused to meet US officials while regularly welcoming UN envoys to his quarters.

But the meeting between Sistani and Rouhani also feeds into an ongoing debate within Tehran about the ways of increasing Iran’s regional influence.

While the Iranian regime and its advocates keep saying they understand that soft power—economy, diplomatic relationships, public relations, cultural and media ties—are the name of the game, they do not walk the talk. They invest far more in high-risk, high cost, hard power games that undermine those soft-power efforts.

It’s a debate that stretches back to the presidency of Mohammad Khatami in the late 1990s and early 2000s.

Khatami sought to curtail Hezbollah’s activities in Lebanon, urging it to become a normal political player. That move possibly contributed to the 2000 Israeli withdrawal from the country’s south, ending an eighteen-year occupation.

Hardliners in Tehran complained that Khatami had relinquished its influence in the Levant. In response, Khatami in 2003 traveled to Lebanon, where he filled Beirut’s massive Cité Sportif stadium with well-wishers. Among those attending were not just pro-Hezbollah regulars, like those who would cheer Ahmadinejad seven years after, but also Maronite and Armenian Christians, and even secular Shia attracted by Khatami’s star power and his calls for a dialogue of civilizations in a demonstration of influence unmatched by any Iranian president since.

Iran’s hard power advances in the last few years have come at the expense of its soft power potential. Unlike many Middle East countries, Iran is a manufacturing powerhouse, punching way above its weight in the industry. But outside of petroleum, it is an export lightweight, unable to trade with other countries in region because of US sanctions and widespread stigma over its deployment of armed groups around the region and its ballistic missile program.

Even Iran’s message of defiance and “resistance” against US bullying and hegemony would be better received if it was not viewed by so many as a bully and hegemon itself.

Iran’s former ambassador to Syria, Mohammad Reza Shabani, speaking to scholars and politicians at the Sulaimani Forum in March, described the soft and hard approaches as part of the same package, a positive set of strategies to build “win-win” relationships, and a set of defensive and preventative measures to deter rivals and superpowers.

“Iran believes in democracy, dialogue, and diplomacy,” he said. “We believe in stability, sovereignty, and national unity. We propose a joint regional order. We have a clear vision of a regional security order. We have a program and we are asking other countries to embrace it.”

Like the silver-tongued Foreign Minister Zarif, Shabani is a smooth-talking multilingual diplomat, and he wowed the crowd in Sulaimani, charming even skeptical Arabian Peninsula scholars attending the conference. But at the end of the day, Iran’s purveyors of hard power who mostly stay out of the picture hold the real power in Iran.

In that sense, the photograph of Rouhani with Sistani is most intriguing for the possibilities it holds: an Iran that wields regional influence because of the power of its ideas instead of the firepower of its gunmen and rockets.