History demonstrates again and again that dealing with the Islamic Republic is a complicated matter. As the world’s attention is drawn to the indirect negotiations between the United States and Iran in regard to reviving the 2015 nuclear deal, it appears that many concessions are being made to the detriment of global security, especially in the Middle East.

The international community seems indifferent to the risks of Iranian hostile behavior and intrusion through its support of Yemen’s Houthi rebels and efforts to clone another Lebanese Hezbollah in Yemen. The Iranian regime’s interest in Yemen goes beyond the country’s internal conflict. It also seeks to impose its influence on the south of the Arabian Peninsula and to tighten its control over the 2,500 km long coastal strip along the Red Sea, the Arabian Sea, the strategic Bab al-Mandab Strait, and Indian Ocean.

The concern is that dealing with Iran is similar to dealing with their proxy in Yemen—the Houthis, who are backed by the Islamic Revolutionary Guards Corps (IRGC). Yemenis see how political deals are not respected—such as the current truce—which required the Houthis to pay civil servant salaries and pensions and open the siege around Taiz and other governorates. This would happen in return for the Yemeni government allowing flights to operate from Sana’a airport and for fuel to enter the country via Hudaydah airport controlled by the Houthis. The internationally-recognized government has held its end of the bargain. However, the Houthis have not—in fact, lack of accountability and more concessions only embolden them further.

In 2014, the Houthis staged a full-fledged coup d’état against the legitimate government led by the elected president Hadi. On February 6, 2015, the Houthis issued what it called a “constitutional declaration,” dissolving the elected state institutions and undermining the outcomes of the National Dialogue Conference that included all Yemeni political parties. Four months later, on July 15, 2015, world powers signed a nuclear agreement that ended the estrangement with the Islamic Republic—the country backing the rebels—via sanctions relief.

The Joint Comprehensive Plan of Action (JCPOA), which was described as a “reward,” did not prompt the Iranian regime to review its destructive policies in the region. Instead, Tehran took advantage of the released assets and oil revenues, which were estimated at tens of billions of dollars. It escalated its support for militias in countries like Yemen and Syria, and supplied them with weapons and its ideology to spread chaos and terrorism to destabilize security and stability in the region.

In his special briefing on May 11, 2022, Vice Admiral Brad Cooper, Commander of the US Naval Forces Central Command, confirmed that about nine thousand weapons were confiscated in 2021—three times the quantities seized in 2020. The weapons were seized on corridors used for smuggling from Iran, which included surface-to-air missiles and parts of cruise missiles that were on their way to the Houthis. Last July, the British Navy announced that it had intercepted a shipment of Iranian weapons from speedboats, including surface-to-air missiles and engines for cruise missiles.

Iranian support for the Houthis—which includes arms shipments, military manufacturing components, and the transfer of expertise for ballistic missiles and drone technologies—was demonstrated by the Houthis’ development of armed capabilities and the series of terrorist attacks it launched since 2017, targeting civilian infrastructure in Saudi Arabia and the UAE, and dozens of attacks on commercial vessels and oil tankers in international waters.

At the beginning of 2022, the Houthis escalated their terrorist attacks in the region, as they launched an attack on March 20 that targeted the Aramco petroleum products distribution station in Jeddah, followed by a series of attacks targeting the Aramco distribution station in Jizan and the Saudi Aramco liquefied gas plant in Yanbu. On January 3, the Houthis admitted that they had hijacked an Emirati ship “Rawabi” in international waters off the Yemeni coast. Then, on January 17 and 24, Houthis targeted oil tanks in the Musaffah Industrial Area and Al Dhafra Air Base in Abu Dhabi using ballistic missiles and unmanned drones. The Arab Coalition announced in March that it has destroyed 106 booby-trapped boats that were equipped to carry out terrorist attacks in the Red Sea and Bab al-Mandab.

These escalating attacks reveal the development of the Houthis’ armament capabilities and the range of its ballistic missiles and drones, whose installation and operation are supervised by Iranian experts and Lebanese Hezbollah. Over the years, the Houthis have taken advantage of Iran’s resources and support to transform from a rebel group in the far north of Yemen into a military arm of the Islamic Republic that conducts proxy wars in the region.

These attacks also raise questions about the future threat posed by the existence and growth of this military technology in the hands of a terrorist militia that refuses to engage in the peace process and owes allegiance to Iran. This threat impacts the global trade movement in the Red Sea and Bab al-Mandab Strait, global energy security, and regional and international peace and security.

While the United Nations-sponsored truce was supposed to contribute to easing tension and advancing peace efforts in Yemen, the opposite happened. At home, the Houthis continue to distort school curricula and have even lured thousands of students under the guise of summer centers to brainwash them with extremist ideas in order to create a new generation of terrorists. Additionally, Houthis continue to mobilize fighters and weapons to the front lines and have organized dozens of military parades in various areas under their control.

With these practices, the Houthis reaffirm that their conviction is neither de-escalation nor the building of a civil state and political partnership with other parties. Rather, the Houthis want to foster a new generation with loyalty and blind obedience and use weapons to impose their control over the state by implementing the Iranian agenda.

While Iran continues its subversive role in Yemen and throughout the region, the Kingdom of Saudi Arabia plays a constructive role in supporting de-escalation efforts and the peace process in Yemen. Saudi Arabia have been trying to find a political settlement that includes all parties, including the Houthis, and gathering Yemenis to build their country, as happened in the Riyadh consultations that brought together various Yemeni political spectrums for the first time since the Comprehensive National Dialogue Conference in 2013-2014. Saudi Arabia is also helping Yemenis in economic and humanitarian relief through the support provided by the Saudi Program for the Development Reconstruction of Yemen, King Salman Center for Relief and Humanitarian work, and the Masam Demining Project.

It is not possible to talk about de-escalation and a peaceful solution to the Yemeni crisis in isolation of the nuclear agreement negotiations. Curbing Iranian expansionist ambitions and limiting its interference in the region must be considered, as it is directly relevant to giving Iran more power. Regardless, the Islamic Republic will go ahead with its agenda in spite of any agreements, which is why it’s integral to have a united approach that holds the Iranian regime responsible and creates guarantees for the security of not just the region but the world.

This makes it imperative for the international community to deal seriously with the risks of empowering another version of Lebanese Hezbollah on Yemeni territory with the strategic importance it represents, and to realize that any indulgence of this danger will affect the world. Yemen is not alone in suffering from Iran and the consequences of its far-reaching extremist agenda.

Muammar Al-Eryani is the Minister of Information, Culture, and Tourism of Yemen. 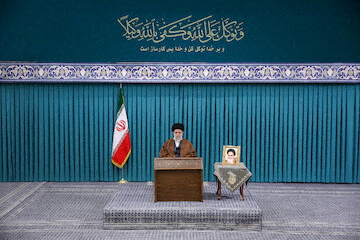 If there is to be any chance of recalibrating this policy after Khamenei dies, as many inside Iran and outside it would like to see, reviving the JCPOA is a necessary first step. 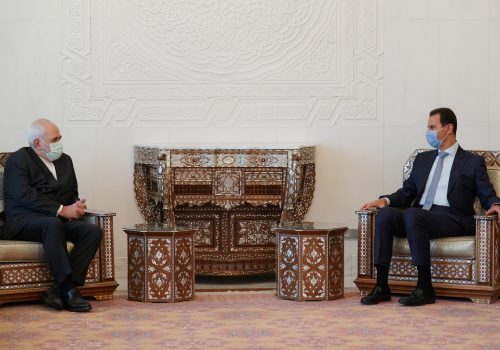 As the Joe Biden administration negotiates a potential return to the Joint Comprehensive Plan of Action in Vienna, Tehran’s backing of the Bashar al-Assad regime should not be left off the table.

Image: Supporters of Yemen's Houthis hold a poster of the top Houthi leader Abdul-Malik Badruddin al-Houthi during a rally to celebrate the seventh anniversary of the ousting of the government in Sanaa, Yemen September 21, 2021. REUTERS/Khaled Abdullah