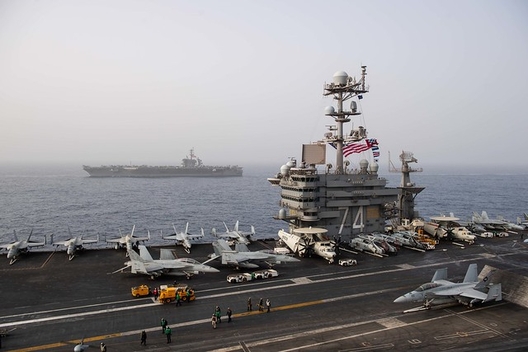 May 8 was the first anniversary of US President Donald Trump’s exit from the Iran nuclear deal, also known as the Joint Comprehensive Plan of Action (JCPOA). The Islamic Republic marked the occasion by announcing that it would defy the JCPOA’s limits on the amounts of enriched uranium and heavy water in its inventory.Iranian President Rouhani issued an ultimatum to the European signatories of the JCPOA to assist Tehran with exporting its oil and normalizing its access to the global banking system within sixty days, or else Iran would take further actions. On the same day, Ali Akbar Salehi, the head of the Atomic Energy Organization of Iran, said that Tehran could dismiss the enriched uranium limit “whenever we wish, and would do the enrichment at any volume and level.”

The possibility of resuming enrichment at 20 percent, the critical step in the production of highly-enriched weapons-grade uranium, would end Iran’s commitment to the JCPOA. The threat of resuming that level of enrichment supports Trump administration’s assertion that the JCPOA was only a temporary halt to Iran’s nuclear ambitions, and the country could resume its nuclear work quickly at the sunset of that agreement.

The Europeans did not need sixty days to act on Rouhani’s ultimatum. They rejected it within twenty-four hours, denouncing Iran’s threat to resume nuclear work. Still, European states have vowed to continue “fully” supporting the JCPOA. The US also imposed new sanctions on Iran’s metals sectors—significant sources of export revenues—with an indication that more sector-based sanctions would soon follow.

The latest US sanctions, a part of the Trump administration’s “maximum pressure” campaign, would pile pressure on an economy already in a tailspin. The International Monetary Fund (IMF) estimates that Iran’s economy will shrink by 6 percent this year. Oil exports, the lifeline of the Iranian economy, have sunk below 1 million barrels per day, from 2.5 million barrels per day before the new sanctions. The national currency, the rial, has lost 60 percent of its value since last year and inflation has reached 37 percent and continues to rise.

Last week’s actions were also confronted with the possibility of a military conflict. The White House announced the deployment of a strike carrier group to the Persian Gulf days ahead of schedule, with a second carrier group maneuvering nearby in the Mediterranean Sea. The buildup of US forces in the region was described by US Central Command (CENTCOM) as a response to “recent and clear” threats by Iran and the Shia militia forces under its command against US forces in the region.

Only days later, on May 13, four commercial ships were sabotaged near the Fujairah port off the coast of the United Arab Emirates. Though it’s unclear who was behind the attacks, some fingers are pointing to Tehran. According to an initial assessment by the US military, explosive charges were used by Iran or its proxies to blow holes into the sides of the four ships.

Threats by Iran and its proxies against US military installations and diplomatic posts in the region are not unprecedented. During the 1979 revolution, the US Embassy in Tehran was stormed and its diplomats were taken hostage for 444-days. Two years later, in 1982, Iran’s Islamic Revolutionary Guard Corps (IRGC) established the Lebanese militant group, Hezbollah. The Shia group soon took dozens of Americans hostage, some of which were killed. In 1983, Hezbollah was also responsible for dispatching suicide bombers to the US marine barracks Beirut and killing 241 marines. Over a decade later, in 1996, an affiliate of the Hezbollah used a truck bomb to kill nineteen US servicemen in Khobar Towers housing complex in Saudi Arabia. During the Iraq War, more than 600 US servicemen were killed by roadside bombs planted by Iraqi Shia militia groups operating under the command of the IRGC elite unit, the Quds Force.

Meanwhile, in recent days, various Iranian officials have openly threatened US personnel and interests due to the Trump administration’s April decision to list the IRGC as a foreign terrorist organization. They have also called for attacks on US Navy and commercial ships—including oil tankers transiting the strategic Strait of Hormuz—as revenge against sanctions. This rhetoric is only adding fuel to the fire, especially in the wake of recent news about the sabotaging of four ships in the Fujairah port.

However, the current US military formation in the region—coupled with the rapidly worsening of the Iranian economy—could make any attack by Iran or its foreign proxies on US forces and interests suicidal. If a war were to break out, it would not be a fair war for Iran, and could threaten the very existence of the Islamic Republic.

Nader Uskowi is a nonresident senior fellow with the Middle East Security Initiative in the Scowcroft Center for Strategy and Security. Nader is also the president of Sagewood Consulting LLC, a consulting firm specializing on Iran, Middle East, and Central Asia. His is the author of Temperature Rising: Iran Revolutionary Guards and Wars in the Middle East. Follow him on Twitter: @nuskowi.