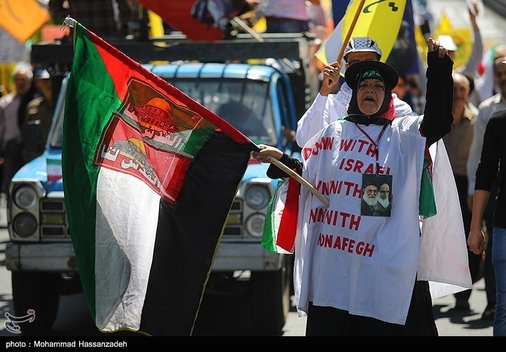 In Iran, public opinion about foreign policy has become extremely divided. Even recent flooding provided ground for opposing parties to promote their stances, especially in regard to Iran’s backing of foreign militias in Iraq, Syria and Yemen.

A video went viral of a local man approaching the governor of Iran’s southern Khuzestan province amid the flooding and asking him why the government spends lavishly on the Syrian and Lebanese people but not on its own. US and Israeli officials—as well as the Iranian opposition in exile—also saw an opportunity to ride the waves of Iranians discontented with their current dire economic situation.

This negative perception of Iran’s foreign involvements is not new. From a famous slogan of the 2009 Green Movement—“Not Gaza, Not Lebanon, I Give My Life for Iran”—to similar chants during December 2017 and January 2018 protests, many Iranians have shown persistent and growing outrage at the country’s policy priorities.

Perhaps to counter these negative views, hardliner media has started featuring video clips, photos and hashtags showing Iran-backed groups in the region gathering aid for Iranians affected by the flooding. The news website Rajanews wrote a report entitled, “Know the friends of the Iranian people,” and referred to events in support of Iranian flood victims in Iraq, Lebanon, Palestine, and Kashmir. The campaign was called the Al-Wafa Relief Campaign and its Gaza event was attended by several civic organizations that got special media coverage from Arab media outlets affiliated with Iran. Similarly, the Iraqi paramilitary group Al-Nujaba started a fundraising campaign in eleven Iraqi provinces under the slogan, “When we were under fire you helped us, know that you are under water, we will help you.”

Solidarity with the Iranian people went so far that several caravans of Iraqi Popular Mobilization Forces entered Iran to help the rescue operation, allegedly at the invitation of Qassem Soleimani, the commander of the Quds Force, the elite branch of Iran’s Islamic Revolutionary Guards Corps (IRGC). But the intervention backfired when opposition media interpreted it as a show of force by the IRGC to suppress ethnic Arab residents of Khuzestan. Reza Pahlavi, the son of the late shah of Iran, went so far as to call on people to “resist foreign terrorists” and expel them.

Iranians differ over a number of other fundamental national security issues, including whether Iran should have relations with the United States. However, one area is rarely discussed openly: relations with Israel. Interestingly, during the last Iranian presidential elections in 2017, no candidate repeated the official anti-Israeli rhetoric of the state. In a second televised election debate, when the moderator asked the candidates, “What are your main foreign policy priorities, especially for supporting the Resistance Front [Hezbollah, Syria and other anti-Israeli countries and groups]?” No candidate responded directly. Even Ebrahim Raisi, the main conservative candidate, changed the subject and highlighted the need to increase exports and improve relations with neighbors.

Although the Trump administration’s unilateral withdrawal from the 2015 nuclear deal has seriously damaged the reputation of pro-negotiation camps in Iran, there are signs that more open debate and skepticism about policies regarding Israel and the Resistance Front might emerge.

One indication is the fact that despite all Iran’s investments in militant groups such as Hamas, their loyalty to Iran has been less than complete. Iranians note that Hamas distanced itself from Iran after the outbreak of the Syrian civil war, which pitted majority Sunni Muslims against an Alawite, quasi-Shia, regime. Hamas turned instead to Qatar for assistance provoking complaints among Iranians about their large investment in the Palestinian cause.

Reports in March of Hamas arresting members of a pro-Iran and allegedly Shia movement in Gaza called the Sabireen Movement exacerbated this feeling. Furthermore, Iranians feel betrayed by news of Arab countries improving relations with Israel at the expense of Iran. Among recent events that have angered Iranians:  the Warsaw Summit in February where Arab leaders rubbed shoulders with Israel Prime Minister Benjamin Netanyahu, a visit by Netanyahu to Oman, Saudi Arabia’s opening of its airspace to planes traveling to and from Israel, Israel’s projected participation in the 2020 World Expo in Dubai and the visit of three Iraqi delegations to Israel in 2018. Increasingly, Iranians are asking why Iran should spearhead the anti-Israeli camp and pay a heavy price, while Arab countries ingratiate themselves in Washington by normalizing relations with Tel Aviv.

Another indication of changing views in Iran is the revival of Shia traditionalism in religious centers including the Qom Seminary. Traditionalists often advocate preserving clearer ideological boundaries with the Sunni world and question too much adherence to Sunni views as a deviation from original Shia thought. Traditionalists see concepts such as Pan-Islamism, Islamic Unity and Ummah as the deceptive conceptual tools of pro-caliphate Salafists who, if successful in creating a global Islamic Caliphate, would execute Shias.

Traditionalists support their arguments with historical events such as the alliance of Shia and Mongols in toppling the Sunni Caliphate of Baghdad in the thirteenth century. This resulted in a revival of Shi’ism due to greater religious freedom under the Mongols.

Such arguments undercut the notion of a dichotomy between Islam and the West. In foreign policy, it translates into making alliances with outside great powers to protect Shias from the historical assault of the majority Sunni Muslim world. Thus, the US could be seen, not as the Great Satan, but as an ally. Similarly, rather than being a “cancerous tumor” which must be wiped off the map, Israel becomes a potential partner against the imminent threat of Sunni powers. Recent references in Shia circles to the lack of special religious status for the Al-Aqsa Mosque in Jerusalem clearly contradict Iran’s ideological support for Sunni causes.

In sum, although Trump’s betrayal of pro-engagement reformists has benefited hardliners by fulfilling their prophesies of US untrustworthiness, doubts are growing about Tehran’s four-decade-long enmity with the US and Israel.

Mahmoud Pargoo is an expert on religion and politics of post-revolutionary Iran and a PhD graduate in Social and Political Thought from Australian Catholic University at Sydney. Follow him on Twitter: @mpargoo.