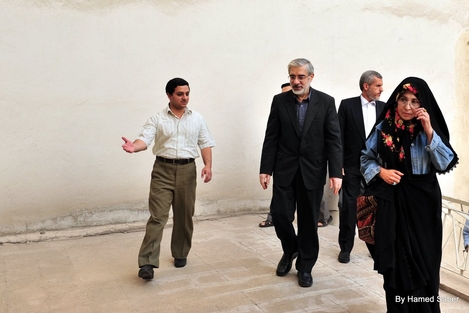 It all started with a rumor. By July 28, many Iranians discussed the imminent release of the Green Movement leaders—Mir-Hossein Mousavi, his wife Zahra Rahnavard and Mehdi Karroubi—who are under house arrest since early 2011 for leading the 2009 post-election protests. Karroubi’s son, Hossein, said that a “credible source” had informed him that Iran’s Supreme National Security Council (SNSC) had ruled in favor of releasing the trio. “They said that if the Supreme Leader doesn’t declare an opinion in the next ten days, the council’s ruling will be executed,” Hossein told Ensaf News.

The ruling seemed reliable enough. As Iran’s political and economic crises piled on in recent months, many reformists have called on Supreme Leader Ayatollah Ali Khamenei to show gestures toward national reconciliation. Releasing the reformist leaders only made sense.

Just days before, Vice President Eshaq Jahangiri promised a “symbolic gathering” of the country’s leaders to show national unity in the face of Iran’s growing problems. Ending the detention of the Green Movement leaders and lifting the media ban on former President Mohammad Khatami—a moral figurehead for the Reformist movement—could be just that. Members of Majlis, the Parliament, who met privately with President Hassan Rouhani had also been speaking with optimism about the topic.

Denials came quick, though. When a reformist MP tasked with securing the trio’s release asked Majlis Speaker Ali Larijani about the SNSC decision, the speaker said no such decision had been made.

It’s unclear if the SNSC made the recommendation, only to be told by the Supreme Leader’s inner circle that it was a no-go. Perhaps the publicizing of the news was aimed to pressure Khamenei into conceding a release. Regardless, no one doubts that the decision lies with the Supreme Leader, who isn’t known for magnanimity, although he has shown to be a shrewd strategist with occasional signs of unexpected flexibility.

The bigger question is what will be the consequences of the release of the Green Movement leaders, and if such a move would shore-up support that the Iranian establishment needs during these dire times.

Mohsen Safaei Farahani, the head of a banned political party of reformists, doesn’t believe that’s the case. Farahani—who was also a deputy economic minister and head of the Iranian Football Federation under Khatami, and later jailed for six months during 2009—said that the release of the trio “would be very good, but won’t solve people’s problems.” Similarly, an advisor to Mousavi claimed that the release “will only work” if the establishment fundamentally changed its ways.

There is truth to this. The release of Mousavi, Rahnavard, and Karroubi will be major news, but it would also be too little, too late. With the rial in free fall and the economy feeling the full brunt of an American-led financial siege, the Iranian people are growing desperate with the status quo. The majority of Iranians who voted for Rouhani in 2013 and 2017 are angry at the president for unfulfilling his promises of employment, prosperity, and the opening of society. The mass protests that shook Iran last December and January were a sign of increasing discontent as demonstrated by many of the chants, including “reformists, hardliners, game over now”—a showing that Iranians were sick of both political factions.

The real question remains if the Green Movement leaders—untainted as they are with the disappointing reformist faction track record during the last eight years—will be able to revive the reformist movement, and ride a wave of popular support that would push back Khamenei.

The trio have shown that they won’t accept humiliation or release under any conditions. In January, as Iran was engulfed in the largest mass protests since the 1979 Islamic Revolution, Karroubi wrote a scathing letter to the Supreme Leader asking him to accept responsibility for the condition of the country. Then in May, Rahnavard refused a partial lifting of restrictions on her house arrest.

The Green Movement leaders are unlikely to accept a quiet release with gag orders. If the trio is freed with some concessions from the Iranian government—releasing political prisoners, opening up society, and helping stimulate the economy through rapid measures—there could be a revival of reformism. However, nothing in the conduct of the Supreme Leader and his political allies, the hardliners, points to such a grand bargain. It’s worth noting that in early 2017, former President Khatami officially called for “national reconciliation” in the face of US President Donald Trump’s threats. Khamenei was quick to dismiss the idea, calling it “meaningless.”

In May, Karroubi wrote a letter to the leadership of his National Trust Party, promising resilience and sarcastically noting that “no one considers responsibility for eight years of our illegal detention . . . It seems that the destiny is to be set by the Angel of Death since he will take one of us first: Us or the other person,” referring to the Supreme Leader.

Khamenei’s relentless struggle with the reformists has raged since the very birth of the reformist movement in 1997 with many ups and downs. Whether it will continue until his death, as Karroubi suggests, is anyone’s guess.

Arash Azizi is a New York-based writer and academic. He previously co-hosted a program on London-based Manoto TV, which was one of the most watched news shows in Iran, and was a former international editor of Kargozaran, an Iranian daily. He is currently a doctoral student at New York University, where he researches the history of the Middle East during the Cold War. Follow him on Twitter @arash_tehran