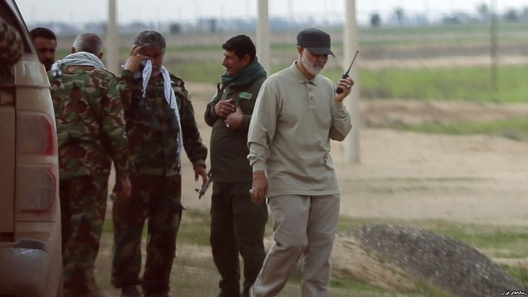 “We’re not going to leave as long as Iranian troops are outside Iranian borders and that includes Iranian proxies and militias,” National Security Advisor John Bolton said on September 24. Similar rhetoric was followed by James Jeffery, the State Department’s special representative for Syria, on September 30. Then on October 27, Brett McGurk, US Special Presidential Envoy for the Global Coalition to Counter the Islamic State in Iraq and al-Sham (ISIS), announced that all Iranian militias must leave Syria.

These announcements are part of a “maximum pressure” strategy laid out by Secretary of State Mike Pompeo. But these demands leave policymakers with three questions: what counts as an Iranian militia; how do we force these militias out of Syria and what happens next; and what are the likely consequences of such a venture.

Rather than rollback or direct confrontation with Tehran, an informal sphere of influence arrangement among the parties involved in Syria—including Israel—coupled with deconfliction would be more effective.

McGurk did not spell out exactly who counts as an Iranian-allied militia. This is problematic because the operation could be very limited or could be a re-run of US diplomat Paul Bremer’s disastrous de-Baathification exercise at the outset of the occupation of Iraq after the 2003 invasion. Bremer’s order fired all members of the Iraqi Baath Party—from school teachers to soldiers—creating a population ripe for radicalization. A similar approach to the Alawites and Shiites in Syria would likely swell the ranks of pro-Iranian groups such as Lebanese Hezbollah.

Policymakers may presume that the Iranian armed forces, components of the Iranian Revolutionary Guards Corps (IRGC)—such as the Basij and Qods Force—would be included in this category. It remains unclear if other groups that have accepted Iranian aid in the past—including Syrian forces, Hezbollah, as well as former US-backed militants who joined Hezbollah to avoid reprisals from Syrian President Bashar al-Assad’s regime—would be targeted, too.

Even if policymakers conclude as to who does and does not count as an Iranian militia, it’s still unclear who the US wants to force out of Syria. As a result, two options are on the table: ramp up the unilateral Iran sanctions already in place, or increase the number of American troops in Syria that would eventually lead to a direct battle with Iranian forces and its proxies.

One hope is that Syria will be to Iran what Afghanistan was to the Soviets. The Soviet Union invaded Afghanistan in 1979 to prop-up a falling Communist regime in Kabul. The US and its allies in the Gulf provided military and financial backing to the anti-Soviet seven-party alliance known as the Mujahideen to prevent the restoration of Soviet influence. This exacerbated Moscow’s financial problems. The war was so costly it helped force the Soviets to pull out of Eastern Europe.

The Trump administration assumes that the re-imposition of US sanctions will cripple the Iranian economy, giving the leadership no choice but to pull out of Syria or face an uprising or revolution. This is highly unlikely.

While the Iranian economy is already under duress, that does not mean the new sanctions are as tough as the sanctions imposed under the Obama Administration. This is partly due to the Trump administration’s decision to unilaterally withdrawal from the Joint Comprehensive Plan of Action (JCPOA) and the loss of support of its allies, while granting waivers to eight countries. Similarly, the Iranian government has a history of evading sanctions and is known to have relied on import-substitution. Sanctions are also known to have provided regime insiders opportunities to benefit from smuggling, reward loyal supporters and punish disloyal members of the ruling coalition, such as the moderates.

While Iran has faced numerous protests and strikes this year, it has survived unrest in the past such as the 1999 student uprising and the 2009 post-election protests known as the Green Movement, not to mention avoiding the spread of the 2011 Arab Spring.

A significant US troop increase would be necessary to eliminate the presence of actors such as the IRGC and Hezbollah. However, after Afghanistan and Iraq this could easily become the US’ third quagmire in the region in seventeen years.

Members of Congress have warned against falling for “mission creep” in Syria. The idea of mission creep is a forward presence today prevents dominoes from falling tomorrow. Due to the American distraction with Iran, this policy raises the probability additional dominoes may fall to ISIS.

A second possibility is that there will be an increase in the likelihood of direct conflict with Iran, which may be by design. In his recent article for Foreign Affairs, Secretary Pompeo wrote of using “maximum pressure” in order to make Iran behave like a “normal country.” However, Iran is unlikely to simply back down in the face of public threats. Instead, it is likely to engage in some form of asymmetric reaction, such as terrorist attacks against US interests, its allies interests, or both. Furthermore, there is a distinct possibility that if the Iranian regime’s survival is threatened, this could turn into a regional conflict that draws in Israel as well as America’s allies in the Gulf.

Not only does the US face a threat from Iran, it also faces threats from a disruptive Russia, an increasingly aggressive China and the possibility of a resurgent ISIS. As powerful as the US is, it cannot fight everyone at all times at all places.

Thus, the US should take two tacks toward Iran. First, Syria should be divided into informal spheres of influence among Iran, Israel, Russia and Turkey. The nation would technically remain a single, unitary state. However, each of these outside players would have veto power in their respective spheres. These spheres would be marked by clear lines coupled with a series of deconfliction agreements to avoid inadvertent escalation.

The most likely spots for conflict is between Iran and Israel. One possible arrangement could be for Iran to remove its Yarmouk, Zeinab, Izra, Shibani and al-Dumayr bases in Syria, and transfer the Damascus base to the Assad regime. Israel would obtain a 15 – 25 km sphere around the Golan Heights toward Damascus that would be free from Iranian-sponsored activity. Iran could keep its remaining base structure intact.

Turkey, Russia and Iran all contest the future of Idlib province. The US should welcome attempts to incorporate Iran into the ceasefire reached over Idlib between Turkey and Russia.

Second, the US should focus on the greater threats to its security, starting with China and Russia.  The Trump Administration should look for ways to exploit tensions between Tehran, Moscow and Beijing. This would be designed to take Iran out of Moscow and Beijing’s orbit, beginning with keeping them out of the Belt and Road Initiative.

Rolling back Iran’s influence in Syria is unlikely to further the Trump Administration’s agenda of making Iran behave like a “normal country.” This ill-defined strategy is likely to be met with resistance and result in an unnecessary quagmire.

Albert B. Wolf is Dean of the College of International Studies at the American University of Kurdistan, Duhok. Follow him on Twitter: @albertwolf82.