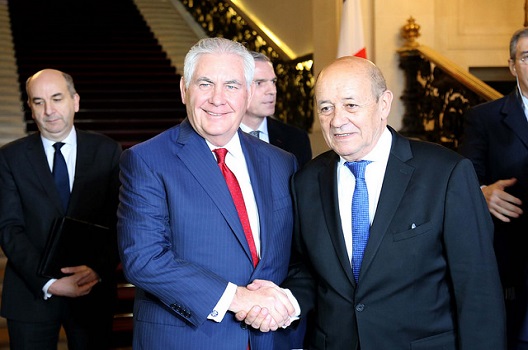 The fate of the Iran nuclear agreement may rest on whether European governments are able to reach a side agreement with the Trump administration on issues that go beyond the provisions of the Joint Comprehensive Plan of Action (JCPOA).

Iran’s increasingly sophisticated ballistic arsenal has become a major concern for its neighbors and the United States. The Trump Administration sees the missile program as a regional and global threat that was not adequately addressed by the JCPOA and has set up a working group with Britain, France and Germany to deal with missiles and other issues not covered by the nuclear deal.

The 2015 agreement was confined to nuclear matters. It stipulated that in return for sanctions relief, Iran reduce the numbers of centrifuges in operation, limit its stockpile of low-enriched uranium until 2030, produce no weapons-grade plutonium and accept stringent scrutiny of its declared nuclear sites by the International Atomic Energy Agency (IAEA). The IAEA has reiterated that Iran has adhered to the deal.

Over the course of his first year in office, however, President Trump has repeatedly disparaged the deal, vowed to “dismantle” it and refused to certify that the benefits of the agreement to US national security outweighed the gains for Iran in terms of sanctions relief. While Trump has stopped short of withdrawing, on Jan. 12, the president said in a statement that he was renewing sanctions waivers for the last time. “Despite my strong inclination, I have not yet withdrawn the United States from the Iran nuclear deal,” the statement said. “Instead, I have outlined two possible paths forward: either fix the deal’s disastrous flaws, or the United States will withdraw.”

Trump put the onus on Europe and Congress to augment the JCPOA. The question remains whether key US European allies can come up with pledges that would satisfy Trump – and not push Iran to withdraw from its nuclear commitments.

In theory, focusing on Iran’s ballistic missile program and regional interventions are an obvious target for European leaders who have overwhelmingly been in support of keeping the nuclear deal intact. In practice, however, restricting missile launches and missile transfers may prove fruitless. The UN Security Council resolution that codified the JCPOA “calls on” Iran to halt ballistic missile development but does not mandate such restrictions. Indeed Iran has not conducted a medium-range missile test for a year perhaps to avoid provoking the Europeans.

The major European powers have continuously defended the JCPOA and made it clear that US compliance with the agreement is a precondition to any additional understandings. At the same time, France, Great Britain and Germany said in a joint statement Oct. 13, 2017, “as we work to preserve the JCPOA, we share concerns about Iran’s ballistic missile program [and] . . . stand ready to take further appropriate measures to address these issues.”

On Monday, French Foreign Minister Jean-Yves Le Drian, who plans to visit Tehran on March 5, was quoted in the Le Figaro newspaper, stating, “We have embarked upon a dialogue with Iran on the issue of ballistics and regional questions.” Further, he claimed, “We will also have the opportunity of underlining our firmness on Iran’s compliance with United Nations Resolution 2231, which limits access to ballistic capacity and which Iran does not respect.”

Sitting alongside Secretary of State Rex Tillerson on Monday,  British Foreign Secretary Boris Johnson stated, “It’s important we do that in parallel and don’t vitiate the fundamentals of the Iran nuclear deal, and we’re sure we can do that.”

However, senior Iranian officials have repeatedly refused to renegotiate the JCPOA or take any steps to halt Iran’s ballistic missile program, which Iran insists is purely defensive in nature. They also deny that they have discussed these matters with European diplomats.

Iranian President Hassan Rouhani’s Chief of Staff, Mahmoud Vaezi, reiterated his country’s firm opposition to talks with France or other foreign states about its missile and defense programs. During a cabinet meeting in Tehran on Wednesday, he said, “We have said many times that whatever is related to our defense and missile power is not negotiable. We have not talked about it with anyone.” When asked about the French foreign minister’s comments, Vaezi said, “Certainly, we will not negotiate with any country about defensive power, including missiles,” describing missiles as an internal affair of Iran.

Former Defense Minister Gen. Hossein Dehghan warned that the US, Saudi Arabia, Israel, and their regional allies are denying Iran’s legitimate right to stand against threats, and said, “They are attempting to make Europe accompany them on this path.”

Iranian Deputy Foreign Minister for Legal and International Affairs Seyed Abbas Araqchi on Monday, rejected reports that Tehran has held talks with EU states regarding its missile program, “This report is not true.”

Araqchi further cautioned European insistence on talks with Iran about its missile program. “We don’t have any specific conclusion reached in Europe yet. Some of them have this idea and think that if they make concessions to Trump on issues other than the nuclear deal, they can make him remain committed to the nuclear deal. This is a fully wrong policy and will certainly have a reverse outcome and we have clearly said this to Europe, too.”

Thus, although concerns over the Iranian missile program may be seen as an entry way for Europeans to satisfy a major US concern, it is unlikely that the Iranians have the appetite to negotiate what they consider a pillar in their deterrent  posture – particularly as the most recently negotiated deal is threatened to collapse.

Masoud Mostajabi is an assistant director with the Atlantic Council’s South Asia Center. Follow him on Twitter @MMostajabi1.