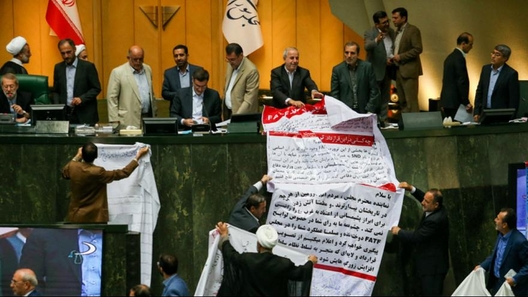 Enacting legislation against money laundering and terrorism financing has been a long struggle between the Iranian parliament, which is dominated by moderate conservatives and reformists, and the Guardian Council, whose members are largely appointed by Iran’s Supreme Leader.

Parliament passed several laws in time for a meeting that began October 14 of the Financial Action Task Force (FATF), the global body that monitors financial transparency and counter-terrorism financing. Over 800 officials representing 204 institutions, including the International Monetary Fund, United Nations and World Bank, attended the meeting. Fulfilling the obligations set by FATF is crucial for Iran to avoid a FATF blacklist, continue to connect with the international banking system and benefit from trade relations with European countries and China at a time when Iran’s economy is facing resumed US sanctions.

The European Union countries, Russia and China have chosen to continue to deal with Iran after the US exit from the Joint Comprehensive Plan of Action (JCPOA). But controversy over required legislation continues between political factions in Iran and recalls the debate among different interest groups regarding the JCPOA in 2015.

According to the Financial Tribune, the government sent four pieces of legislation to parliament regarding banking transparency. They include amending the country’s anti-money laundering/counter-terrorism financing law in accordance with FATF standards and joining the UN Convention Against Transnational Organized Crime and the International Convention for the Suppression of Financing of Terrorism. Foreign Minister Mohammad Javad Zarif appeared in parliament to defend the bills and respond to questions, noting their importance to the JCPOA, Iran’s foreign policy more broadly and its economic situation.

The Expediency Council will review the case based on the national interest. The Supreme Leader, Ayatollah Ali Khamenei, while not rejecting the legislation in its entirety, criticized it saying: “These conventions are cooked up in the think tanks of the great powers securing their interests and for the sake of their benefits.” He urged parliament members in a meeting last week to work on other bills. However the parliament speaker, Ali Larijani, said that the Supreme Leader had not rejected the legislation.

Those who opposed the nuclear deal believe that meeting FATF criteria and releasing financial information would hurt the national interest and the independence of the country. They also note that there is no guarantee that if Iran would meet the specified criteria, that it would be able to benefit from the international banking privileges. Mehdi, an Iranian student who asked that his last name not be used, is critical of the Rouhani government and economic corruption. He told this analyst that Iran should not pass the FATF bill, arguing that Iran will still remain isolated from the international financial system.

According some analysts, Supreme Leader Ayatollah Ali Khamenei has given a yellow light to the FATF bill as he did with regard to the JCPOA so that if Iran remains on a FATF grey list or is returned to the black list, he will be seen as having rightly doubted the independence of the organization from US dictates.

Others opposing the FATF bills are groups that benefit from the lack of transparency in such affairs and that put their own advantage over the national interest.

The Secretary of Executive Affairs of FATF David Lewis mentioned in an interview with BBC Persian on October 14, that there is no guarantee that Iran would be removed from the black list and that it is up to international businesses and the private sector whether they engage with Iran. Counter-measures against Iran have been suspended since the JCPOA was reached and are expected to remain in abeyance for another four months.

The reformists and other pro-government, moderate groups prefer the transparency embedded in FATF and believe that Iran would benefit by meeting FATF standards. They argue that the advantages of joining FATF and potentially being removed from the black list exceed the risks of further international isolation. Ali Vaez, an Iran specialist at the International Crisis Group, told BBC Persian that while some groups have tried to obstruct the bills, many others are in favor.

The political parties and factions that supported the JCPOA in 2015 are the same ones that are behind the FATF legislation. Hoping to keep Iran in the deal and wait out the Trump administration, they believe that the laws are necessary to salvage trade and financial exchanges with the international community especially after US withdrawal from the JCPOA.

According to Vaez, Iran would have had to meet the FATF criteria in any case to benefit from the nuclear agreement.

Tahereh Hadian-Jazy is writes on women’s rights in Iran and the Middle East. She holds a Masters degree in modern Middle Eastern studies from Oxford University and has been accepted for a PhD at the University of St. Andrews.