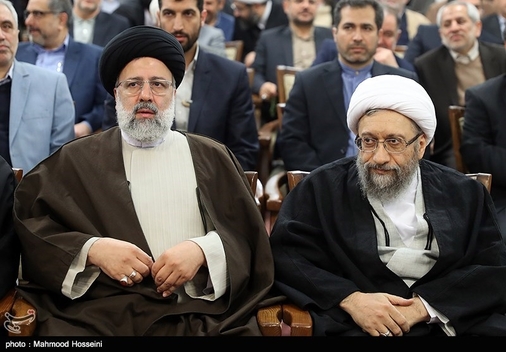 A new crackdown on corruption in the Islamic Republic is roiling the country’s political elite and could have implications for the succession to Supreme Leader Ayatollah Ali Khamenei.

Attacks have mounted on Ayatollah Sadegh Larijani, once touted as a possible successor to the Supreme Leader, since Larijani was dismissed as head of the Judiciary earlier this year and replaced by another contender, Ebrahim Raisi.

In a meeting with officials from a parliamentary Basij force, Ayatollah Mohammad Yazdi, a close associate of Khamenei, a member of the prominent Qom Seminary and also of the Assembly of Experts—body tasked with overseeing the Supreme Leader’s work and choosing his successor—appeared to accuse Larijani of condoning corruption.

This direct and strong confrontation, which seems to have had the approval of Khamenei, referred to a complaint by Larijani to the Supreme Leader about the arrest of Larijani’s chief of staff, Ali Akbar Tabari. Yazdi was quoted as saying at a meeting on August 19 with officials from the Basij that Larijani was free to carry out a threat to go back to Najaf, the major Shia religious center in Iraq where Larijani was born, if he was unhappy with the arrest.

“Your presence is Qom has not been very effective,” Yazdi reportedly said. “A chief of staff who held an important post for 10 years was arrested. He protests at the reason for his arrest. They built a palace in the name of the seminary in Qom. Where did you get [the money]?”

Larijani has rejected the accusations. Yet during his decade-long tenure as the head of the judiciary, there were many corruption scandals. Among the most infamous involved Babak Zanjani, an oil broker accused of stealing billions of dollars in oil revenues, who is facing the death penalty, and the case of Salar Aqakhani, an associate of the Intelligence Ministry, accused of trying to manipulate Iran’s foreign exchange market.

The Judiciary spokesman said on July 16 that Larijani’s aide, Tabari, the director of finance and then deputy head of the judiciary for administrative affairs, had been arrested that month for “exerting influence on some legal cases” and “having unlawful and unethical relationships” related to several lawsuits.

Larijani is a member of one of the Islamic Republic’s elite families. His brother, Ali, is speaker of the parliament and a former national security adviser, and another brother is a prominent physicist. Former President Mahmoud Ahmadinejad, who fell from grace following tensions with the Supreme Leader, was angered that several of his top aides were jailed during Larijani’s tenure. Ahmadinejad has threatened to reveal evidence of corruption by members of the Larijani family.

Since Raisi was appointed to replace Larijani in March, there have been several financial corruption cases that Raisi sought to confront. Aqakhani’s case is one example. Another involves the Padideh Shandiz, a major project in the conservative northeastern city of Mashhad.  Nineteen defendants were sentenced to a combined 150 years in prison in connection with that case.

Meanwhile, Hadi Razavi, the son-in-law of Mohammad Shariatmadari, a veteran Reformist politician currently serving as minister of labor in President Hassan Rouhani’s administration, was given a 20-year prison term without the right to appeal after being convicted of multiple fraud charges.

In addition, sixty judges have been dismissed as part of the anti-corruption campaign launched since Raisi was appointed. According to Raisi’s first deputy, the clampdown was part of an “intensified” campaign against “law-breaking judges.”

Corruption and financial scandals by government officials and heads of government-affiliated organizations and companies have reached a record in the past few years. Cases of financial corruption by those in the inner circle and close to officials such as heads of banks and deputy ministers have caused increasing public discontent, especially at a time of economic sanctions.

Shima, a lawyer in Tehran who asked that her last name not be used, told this author that Zanjani may not have been the main player involved in the embezzlement case that there are others who should be prosecuted and executed. She further said that she gathers that the latest cases reflect a political competition between Raisi and Larijani rather than a genuine effort to wipe out corruption. Katy, another lawyer living in Tehran, also expressed skepticism. Niloofar, an architect, said that she hopes Raisi will be more effective in terms of punishing those responsible for corruption.

Some political figures have expressed concern about the Yazdi-Larijani tensions. Member of Parliament Ali Motahhari, who is politically independent but on specific issues sometimes leans towards reformists, said that the dispute should not have become public for the “enemy could take advantage” of such conflict.

A hardliner, Alireza Zakani, who is close to Ayatollah Khamenei’s circle, had publicized Yazdi’s comments about Larijani. However, hardliner cleric Ayatollah Makarem Shirazi called on both parties to avoid public quarreling. Hossein Shariatmadari, chief editor of hardline Keyhan daily, also suggested that the “if the accusations and counter-accusations are true, they will only disappoint the people and make the enemies of the Islamic Republic happy.”

Many analysts say that the accusations against Larijani’s former aide may be merely a political game to impede his ambition to succeed the Supreme Leader. Larijani has alleged that the charges against Tabari, which were broadcast on state television, were part of “a pre-planned scenario” and “a bigger project” to tarnish Larijani’s image.

The case could fortify Raisi’s own aspirations. But it remains to be seen if Raisi will be any tougher than Larijani in terms of confronting an endemic corruption problem in Iran.