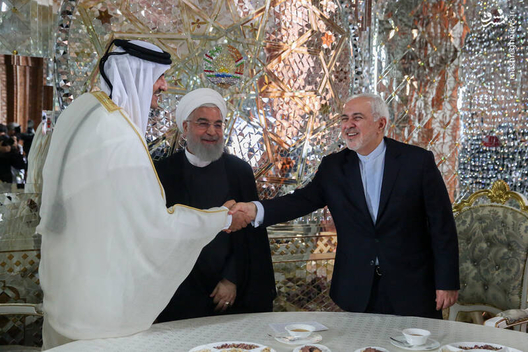 Despite the recent rise in tensions between the United States and Iran, Qatar is moving closer to its controversial neighbor as a blockade of Qatar by prominent Arab countries appears to have become a permanent feature of the regional geopolitical landscape.It has now been two years since Saudi Arabia, the United Arab Emirates (UAE), Bahrain, and Egypt, collectively known as the Anti-Terror Quartet (ATQ), cut all diplomatic ties with the State of Qatar, and imposed an air, land, and sea blockade on the gas-rich emirate. The four states accused Doha of supporting terrorism, maintaining excessively close relations with Iran, and interfering in neighboring states’ domestic affairs.

This was not the first time that relations soured between Qatar and its Arabian Peninsula neighbors. Ever since the 1990s, Qatar’s relatively independent foreign policy and keenness to assert its autonomy from the Saudi shadow fueled friction between Doha and other capitals in the Gulf Cooperation Council (GCC). By 2014, Saudi Arabia, the UAE, and Bahrain withdrew their diplomats from Qatar, arguing that the latter was assisting militant organizations. This was a culmination of increased tensions, which stemmed from Qatar’s support for political Islam, the broadcasting of Al Jazeera, whose content has often drawn the ire of certain Arab states’ leaders, and Qatar’s embrace of the Arab Spring movements of 2011, which other Arab Persian Gulf monarchies largely opposed.

With no resolution of the latest crisis on the horizon, tensions in the Persian Gulf remain high. The blockade, which effectively made the GCC a dormant institution, created a zero-sum dispute that has become highly emotional. The Saudi and Emirati-imposed blockade has failed to pressure Doha into making the concessions demanded, leaving Riyadh and Abu Dhabi in a difficult position with the limits of their power on full display. Contrary to the interests of the quartet, the siege of Doha has only pushed Qatar closer to Iran with implications for the Middle East’s fluid and complicated geopolitical order.

Like Turkey, China, and Pakistan, it is undeniable that Iran has played a key role in helping Qatar maintain its independence over the past two years. Qatar has been using Iran’s airspace and shipping routes to circumvent the blockade. Between 2016 and 2017, Iranian exports to Qatar increased by 181 percent. Iranian-Qatari trade in non-oil commodities has doubled just since March. Morally and diplomatically too, the leadership in Tehran was quick to come to Qatar’s side, strongly denouncing the ATQ’s blockade of Doha from the start of the crisis. It was thus unsurprising that less than three months after the Saudi/Emirati-led bloc began besieging Qatar, Doha sent its ambassador back to Tehran. Qatar had recalled him in 2016 as a sign of solidarity with Riyadh amid the crisis in Iranian-Saudi relations following the Saudi execution of a prominent Shia leader, Sheikh Nimr Baqir al-Nimr, and an attack by Iranian vigilantes on Saudi diplomatic missions in Iran.

While Iranian-Qatari relations have reached new heights, it is unclear to what extent the two states can further deepen their ties. Qatar, as the host of the largest US military installation in the Middle East, does not always align with Iran, which sees the American military presence in the region as a grave threat.

Additionally, while Qatar and Iran’s trade relations have grown since mid-2017, such ties have not been as fruitful as some had originally expected. Indeed, Turkey has benefited the most from upgrading its partnership with Qatar. Furthermore, the current sanctions regime against Iranian banks prevents the exchange of currencies, while rigidities in the Iranian market—such as the failure of domestic companies to adapt to evolving market demand and high tariffs—are obstacles to greater economic activity. Finally, the lack of refrigerated containers on Iranian boats has hindered the export of fruits and vegetables.

Ultimately, Qatar’s perspective on Iran is similar to the Kuwaiti leadership’s understanding of the Islamic Republic. Both Persian Gulf emirates believe that it is prudent to collaborate with and accommodate Iran, yet Doha and Kuwait City also have concerns about Iran filling more regional power vacuums in a manner that raises sectarian temperatures and drives instability in the Middle East.

Given Doha’s current state of relations with the blockading GCC member-states, the Qataris must embrace a highly pragmatic approach vis-à-vis Iran. Put simply, for Qatar to maintain its independence, Doha will have essentially no choice but to maintain its strong partnership with Turkey, which has been an important ally from the perspective of military support and food security, as well as Iran. The odds are good that Iranian-Qatari ties will continue to strengthen even if Tehran and Doha agree to disagree on certain issues such as Syrian President Bashar al-Assad’s legitimacy. Speaking at the fifth summit of the Conference on Interaction and Confidence Building Measures in Asia in Dushanbe, Tajikistan on June 15, President Hassan Rouhani emphasized that improving relations with Qatar is a high priority for Iranian policymakers. In a meeting on the side lines of the conference, Rouhani told the Qatari emir that “stability and security of regional countries are intertwined” and Qatar’s head of state, in turn, stressed that Doha seeks a stronger partnership with the Islamic Republic.

The issue of Qatar’s energy landscape is another factor that will push Doha and Tehran closer in the future. In December, Qatar announced its withdrawal from the Organization of the Petroleum Exporting Countries (OPEC), a Saudi-dominated institution. Qatar’s decision was reinforced by a push to further develop its Liquified Natural Gas (LNG) sector. Indeed, Qatar Petroleum embarked on joint ventures with Exxon Mobil, and took actions to expand its LNG storage, thereby clearly illustrating Qatar’s willingness to follow a path independent of OPEC. Qatar has also cooperated with Iran in the energy sector significantly, as the two countries have been working together to preserve the North Dome/South Pars gas field, which they share and which is the world’s largest gas reserve.

A realistic look at the Persian Gulf’s geopolitical order implies that the GCC crisis may become permanent. Despite certain signs of the dispute possibly winding down, such as the Bahraini prime minister’s phone call to the Emir of Qatar and King Salman’s decision to invite the Qatari head of state to the GCC summit last month, reconciliation between Doha and the ATQ appears unlikely. Within this context, it is difficult to imagine Qatar not looking to Iran for greater cooperation although pressure from the US will limit the extent to which Doha openly moves toward a deeper relationship with the Islamic Republic.

Qatar will continue to receive condemnation from the ATQ states and certain elements of the Washington establishment which point to the strengthening Doha-Tehran partnership as evidence of Qatar’s keenness to maintain warm ties with predatory actors that threaten regional security. Yet, it is indisputable that the decision of three GCC member-states to blockade Qatar created the circumstances that have left Doha with no option but to turn to Iran if the Qataris refuse to surrender to the ATQ’s demands.

For Qatar, a major foreign policy challenge will be to continue its cooperative and pragmatic partnership with Tehran while remaining on good terms with the Trump administration. To Doha’s credit, it appears to be skillfully balancing Washington and Tehran’s interests off each other without drawing the ire of either side, underscored by the fact that “no Qatar-based entity has been designated by the United States as an Iran sanctions violator,” according to the Congressional Research Service. Amid sharp rises in tension between the White House and Iran, Qatar finds itself under mounting geopolitical pressure. Yet for the blockaded emirate, joining either an anti-US or an anti-Iran coalition in the region cannot be considered a viable option. Qatar simply places too much value on good relations with both the world’s superpower, which is the emirate’s security guarantor, and its Persian neighbor.

Ultimately, these dynamics leave Doha with a strong incentive to help cool tensions between the US and Islamic Republic by serving as a backchannel between American and Iranian officials. This ‘middle-man’ role between Washington and Tehran which Doha has embraced was on display in May 2019 when Qatar and Iran’s chief diplomats exchanged visits. What remains to be seen is whether Qatar’s leadership can serve as an effective diplomatic bridge. Yet along with their counterparts in Germany, Iraq, Japan, Oman, Russia and Switzerland, officials in Qatar are determined to urge both sides to “come up with ideas that open the doors” to a de-escalation of the US-Iran dispute.

Giorgio Cafiero is the CEO of Gulf State Analytics, a Washington, DC-based geopolitical risk consultancy. Follow him on Twitter: @GiorgioCafiero.

Andreas Paraskevopoulos is an intern at Gulf State Analytics.

Image: Iran's president and foreign minister shakes hands with the Emir of Qatar at the CICA summit in Tajikistan (mashreghnews.ir)