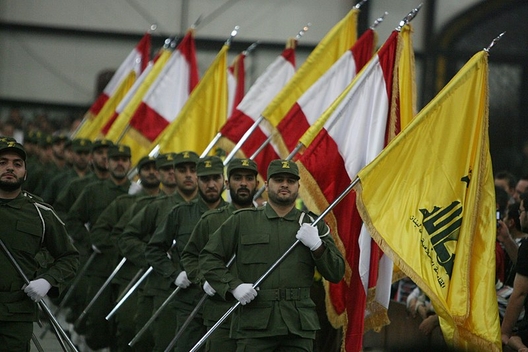 On January 28, 2015, a colleague and I were driving north in Lebanon’s Bekaa Valley to report on the latest developments involving the Islamic State of Iraq and al-Shams (ISIS), which was then occupying a desolate mountain range straddling the Lebanon-Syria border. Shortly before midday, we received news that Hezbollah had just launched an ambush against an Israeli military convoy on Lebanon’s southeast border. We immediately did a U-turn and began heading south.Attacks by Hezbollah in south Lebanon against Israeli forces had been rare since the end of the month-long 2006 war. But this one did not come as a surprise. Ten days earlier, a pair of Israeli combat drones had attacked a motorcade in the Golan Heights, killing six members of Hezbollah and a major general in the Islamic Revolutionary Guard Corps (IRGC). Among the Hezbollah fatalities was the son of Imad Mughniyah, Hezbollah’s military commander who had been assassinated in Damascus seven years earlier.

The “rules of the game” that dictated clashes between Israel and Hezbollah allowed the former to strike the latter in Syria with relative impunity. But any Israeli attacks inside Lebanon would be met with retaliation. Nevertheless, even though the deadly drone strike occurred on Syrian territory, the deaths of an IRGC general and the son of the revered Mughniyah was too egregious a hit for Hezbollah to ignore.

As we drove further south, the phone rang again. It was a friend in Beirut who breathlessly asked if we had heard the news. “Hezbollah wiped out an entire Israeli military convoy. They are talking about at least twenty soldiers dead.”

At that point, we stopped driving south and turned west toward Beirut. Twenty dead soldiers meant that Israel and Hezbollah were going to war and we needed to get back to the Lebanese capital before the inevitable Israeli air strikes destroyed bridges and cratered highways.

As it transpired, only two Israelis died, a captain and a sergeant. And, even as Hezbollah’s Kornet missiles were streaking toward their target, the party’s leaders were sending messages to Israel via the United Nations office in Beirut and the UN peacekeeping force in south Lebanon that the event was over. However, if the Israelis chose to counter-retaliate, then Hezbollah was ready to continue fighting.

Other than an immediate artillery bombardment of areas near the ambush site, the Israelis stayed their hand, presumably surmising that the loss of two soldiers was an acceptable price for the deaths of an IRGC general and six Hezbollah officers.

The “rules of the game” had held, but it is by such slender threads that the choice of war or peace hangs.

With more than three decades of experience battling each other among the valleys and hills of south Lebanon, Hezbollah and the Israeli military have developed an acute unspoken understanding of each other’s actions and behavior. This, to a large extent, has offset the risks of accident and miscalculation from their occasional acts of brinkmanship since 2006 that could otherwise have sparked a war that neither side seeks.

A similar dynamic of brinkmanship is underway in the Persian Gulf between Hezbollah’s patron, Iran, and the United States. As with Hezbollah and Israel, neither Washington nor Tehran seek an all-out war. But unlike the Hezbollah-Israel dynamic of mutual familiarity which helps mitigate against an escalation, neither Iran nor the US have clear understandings of each other’s motives, agenda and behavior.

During the past year, the Trump administration has sought to implement a “maximum pressure” policy on Tehran to force compliance on a range of issues related to Iran’s nuclear program, missile proliferation and strategic reach across the Middle East. But Tehran has not yielded, and has begun to push back, exploiting the nation’s asymmetrical capabilities to demonstrate the inherent risks to the US and its allies in the region if the pressure campaign of sanctions and threats continues. By the same token, the Iranians are having to evaluate the intentions of a capricious American president who one moment is reversing a decision to stage an air strike against Iran, and the next is issuing a tweet threatening the “obliteration” of the country.

How this confrontation plays out in the Persian Gulf remains to be seen, but in Lebanon, many are anxiously wondering how Hezbollah could react if the tensions spill over into conflict.

On June 1, Hezbollah’s Secretary-General Hassan Nasrallah warned that an attack on Iran “will mean the whole region will erupt,” adding that, “Any American forces and American interests will be permissible” as a target.

While the US has a massive conventional military edge over Iran, Tehran has formidable asymmetric capabilities—some of which have been employed in recent weeks—such as the shooting down of a US surveillance drone, the sabotage attacks against several oil tankers suspected to be the work of Iran, and an uptick in missile and combat drone attacks from Yemen into Saudi Arabia. Iran also extends influence and backs allies across much of the Middle East: Houthi rebels in Yemen who have been battling a Saudi-led coalition for over four years; Shia groups affiliated with Iraq’s Hashd al-Shaabi, or Popular Mobilization Committees; similar Iran-backed militias in Syria; and, most of all, Hezbollah in Lebanon.

Hezbollah is the greatest success Iran has had in exporting the Islamic revolution. It has evolved into arguably the most formidable non-state military force in the world. Hezbollah fields in excess of an estimated 30,000 trained fighters, many of whom will have gained invaluable combat experience on the bloody battlefields of Syria since 2012. Israel estimates Hezbollah’s arsenal includes up to 150,000 rockets and missiles. Hezbollah is believed to have acquired advanced anti-aircraft capabilities as well as an air wing of surveillance and combat drones, and an amphibious warfare unit that is believed to be equipped with semi-submersible craft and swimmer dispersal vehicles for potential seaborne infiltrations of Israeli territory. Hezbollah also has combat units trained to breach Israeli territory in the event of another war. Small wonder, perhaps, that for the past two years Israel has classified Hezbollah as its number one threat.

Nevertheless, the scale of Hezbollah’s military capabilities means that, for Iran, it is a one-shot deal. If Hezbollah was to attack Israel in support of Tehran, it would trigger a devastating war that could last weeks and wreak destruction on both Lebanon and Israel. Depending on the aftermath of such a war, there is no guarantee that Hezbollah would be able to rebuild to its pre-war capacity and continue posing a threat to Israel and, therefore, serve as a factor of deterrence for Tehran. Iran’s leadership understands this and will utilize its Lebanese ally wisely.

Much depends on the scale of any conflict between Iran and the US. Short of full conflict, Hezbollah’s role would likely be covert and deniable. Hezbollah cadres are already deployed in Syria, and to lesser extents in Iraq and Yemen, and are well-placed to support the Iranian war effort by providing assistance and guidance to various Iran-backed entities to attack US and allied targets across the region. However, if Tehran calculates that the scale of a US campaign poses a potential existential threat to the Islamic Republic itself, then Hezbollah could escalate its support mission to one of direct attack on Israel, irrespective of the consequences on Lebanon.

The question is often asked whether Nasrallah would have leeway to reject a call by Tehran to launch a full-scale attack against Israel, in appreciation of the destruction Lebanon will experience and the subsequent impact on his party’s domestic popularity. In short, Nasrallah has no choice. On a pragmatic level, an existential threat against Iran is equally threatening to Hezbollah. A significantly weakened, or collapsed Tehran would leave Hezbollah orphaned on the western littoral of the Middle East and susceptible over time to the deepening bite of international sanctions and prey to the hostility of Sunnis in Lebanon and elsewhere in the region.

But much more significantly, Hezbollah is committed to following the decrees of the Vali-e Faqih, currently embodied by Supreme Leader Ayatollah Ali Khamenei. Hezbollah’s leaders, including Nasrallah, have been quite open for many years on the group’s ideological commitment of obedience to it. If the order to attack is given, Hezbollah will follow through and let the chips fall where they may.