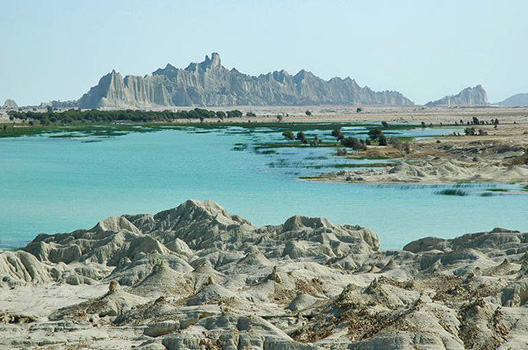 Iran is seeking new investment for the Makran coast along the Gulf of Oman to boost development in one of the country’s most deprived regions, fight drug trafficking and expand its naval presence beyond the Persian Gulf.

Iranian Navy Chief Rear Admiral Habibollah Sayyari says the region is vital for Iran and an opportunity that has not been utilized correctly. “Do we lag so far behind because our goods must first go to Dubai and then to Iran,” he asked, speaking at a recent conference in Tarbiat Modares University. He may have been referring to the lack of adequate customs, railroad and navigation infrastructure at Iranian ports such as Chabahar on the Gulf of Oman.

What Sayyari called unrealized potential ranges from “leaving large food resources un-utilized” to a need for increasing the Iranian Navy’s presence in international waters to protect Iran’s national security. In the case of “confrontation, we can be present in the international waters,” Sayyari said. “Because the enemy’s strategy is to intervene from distance rather than confronting us in the Gulf of Oman.”

“We can be present all over the world and no one can prevent us,” he added.

The main goal, Sayyari stated after Iran test-fired a Nour surface-to-surface cruise missile along the Makran coast in January, is “to strike fear in the hearts of the enemies.”

According to Sayyari, the concept of “returning to the sea” dates back to a decree by Supreme Leader Ayatollah Ali Khamenei in 2009 for Iran to gain a presence in international waters.

It is no secret that Khamenei has for over 30 years, since his days as Deputy Minister of Defense and Ayatollah Ruhollah Khomeini’s representative on Iran’s Supreme Council for National Security, been a proponent of expanding the Islamic Republic of Iran Navy (IRIN). Iran has two naval forces, the IRIN and the Islamic Republic Revolutionary Guards Corps Navy (IRGCN.) In general, the more ideology-driven IRGCN is tasked with coastal defense and asymmetric tactics, such as the use of small boats to trail U.S. ships in the Persian Gulf. The IRIN is in charge of strategic engagement with partner nations and out-of-area deployments.

The Supreme Leader is also interested in developing the Makran coast for economic reasons and calls the semi-desert region an “undiscovered treasure.” In 2008, he said that Iran had focused all of its attention on the Persian Gulf and ignored “our enormous wealth in the Gulf of Oman.” This body of water, he went on to say, “is the backbone of the Persian Gulf and determines its fate.” Khamenei has insisted numerous times on developing Makran as expeditiously as possible.

The region has high potential for sea trade. It can provide Iran access to the Indian Ocean and an outlet to the sea for land-locked countries in South and Central Asia. It can also be an alternative route to deliver goods to Iran that bypasses the Strait of Hormuz.

There are other alternatives. Mohsen Zarrabi, the head of the Iran-Oman joint Chamber of Commerce, believes that Oman’s ports — one of them, Sohor port is only 54 kilometers from Chabahar – would be a better alternative for Iran trade than Dubai and the other ports of the United Arab Emirates.

There are additional good reasons why Makran has not been developed.

The Makran coast is one of the least secure regions in Iran. It’s a transit center for drug trafficking. It is located far from the central Iran and has a very harsh climate.

Mohammad-Hossein Forouzan-Mehr, Iran’s minister of Coordination of Economic Affairs and Regional Development, told a conference on investment opportunities in Hormozgan Province in April 2015, “the government is determined to move from land-based to a sea-based economy and in this regard, the Makran coast is particularly significant for the government.”

He noted that attracting domestic and foreign investment is a strategic goal of Iran’s sixth development plan. Referring to a landmark nuclear deal, known as the Joint Comprehensive Plan of Action (JCPOA), he went on to say, “our second step is using the JCPOA opportunity to achieve an economic boom in the country.”

Developing Makran, be it for military or economic purposes, will likely require an ambitious diplomatic component. As Sayyari said, “You can get financial resources from other nations, as the British Navy does by providing security in the Gulf of Aden, but that requires diplomacy.”

Any large-scale economic project in the area could benefit South and Central Asia. Developing the Makran coast would have made better economic sense for Iran and the region than expanding Iran’s nuclear program, which brought horrific consequences for the Iranian economy.

Now the budget for Makran has to come from the private sector and foreign sources. To attract such investment, particularly from abroad, it would be better to emphasize a de-escalation of Iran’s conflicts rather than a need to confront enemies.

The commander of the Navy described the security environment at Iran’s western borders as very complex and tense and said the foreign ministry should assist in developing Iran’s “defense diplomacy.” However, the most effective way for Iran to do this is through political engagement, in contrast to Admiral Sayyari’s bellicose remarks.
Fatemeh Aman is an expert on the Middle East and South Asia. She has worked as a journalist, media and political analyst, and has written widely in English and Persian on Iran, and South Asia. She is a frequent contributor to Jane’s publications, including Jane’s Islamic Affairs Analyst and Jane’s Intelligence Review, and appears often on Persian and English-speaking media outlets. She is the co-author of Atlantic Council’s report “Iran, Afghanistan, and South Asia: Resolving Regional Sources of Instability.”