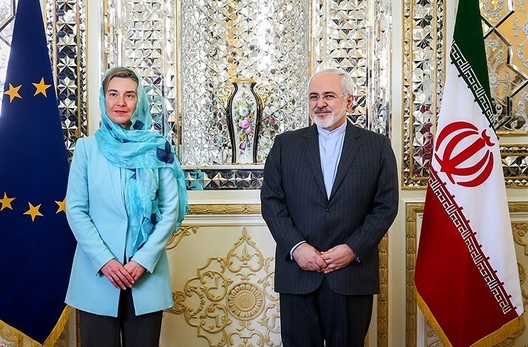 Ever since the US withdrawal from the Iran nuclear deal in May 2018, the European Union (EU) has emphasized its sovereignty regarding both commercial and political relations with Iran, insisting that it could continue trade under the framework of the 2015 Joint Comprehensive Plan of Action (JCPOA). Despite that, trade has cratered and a mechanism—the Instrument for Supporting Trade Exchanges (INSTEX)—expressly created to keep up commercial ties has not yet been implemented.

When INSTEX was announced on January 31, Per Fischer, the former head of financial institutions at Commerzbank, was appointed as its president. The INSTEX supervisory board includes Simon McDonald, the UK Permanent Under-Secretary of State for Foreign Affairs; Miguel Berger, head of the Economic Department at the German Foreign Office; and Maurice Gourdault-Montagne, Secretary-General of the French Ministry of Europe and Foreign Affairs. These are seasoned senior diplomats. There is, however, a noticeable absence of senior officials from the UK Treasury, Germany’s Federal Ministry of Finance, France’s Ministry of the Economy and Finance or central bank officials from Britain, France and Germany—the so-called E3.

While diplomats can contribute to the work, the more obvious choice of INSTEX directors should have been senior officials and experts from E3 finance ministries or central banks, i.e. experts in international financial markets and trade as INSTEX is expected to define and implement a financial solution for EU-Iran trade and not primarily drive a political solution.

By not appointing senior officials from E3 finance ministries or central banks to lead INSTEX, these countries are intentionally or unintentionally conveying a message to the Iranian government, as well as to EU and Iranian companies and banks: the E3 consider establishing INSTEX as a political move rather than an effort to create a viable trade mechanism.

If interpreted that way, Iran will consider this as a maneuver by the E3 to shy away from its commitments under the JCPOA due to US pressure.

On April 29, Iran announced the establishment of a Special Trade and Finance Institute (STFI), which will mirror INSTEX in order to facilitate EU-Iran trade under US sanctions. Unlike those named to INSTEX, the appointed members of STFI all come from the Iranian banking sector although none come from Iran’s Ministry of Economic Affairs and Finance or at the Central Bank of Iran (CBI), which has been sanctioned by the United States. STFI’s president is Ali Asqar Nouri, a former advisor at Iran Zamin Bank. STFI’s board consists of Hamid Ghanbari, a former director at the CBI, as chairman; Farshid Farrokh representing Refah Bank; Sharhzad Moshiri from Bank Keshavarzi; Mohammad Reza Javadian representing Bank Pasargad; and Hamid Ghanbari representing Faradis Gostar Kish, a company that provides mobile payment solutions.

None of the appointed STFI directors are diplomats or high-ranking government officials. While skilled in their fields, these directors are not at the same political and operational level as their INSTEX counterparts. This could indicate that Iran is equally not considering INSTEX as a serious E3 approach aimed at solving the EU-Iran trade dilemma.

Neither body, so far, has shared detailed information about the mechanism with any chamber of commerce, trade organization or press in any affected country. The president of STFI said in an interview on May 29, “All these processes have been defined, but doing them all is very complex.”

Looking at the structures of INSTEX and STFI, it appears that neither the E3 nor Iran anticipate that the proposed mechanism will work.

From the start, the idea of this mechanism has raised questions about its practicality given the imbalance between European exports to and imports from Iran as well as the expansive nature of US sanctions.

In order for the INSTEX “barter” process to work, the revenue generated by selling Iranian oil needs to be “transferred” to it. However, with continued US restrictions that prevent selling Iranian oil, the influx of Iranian funds into INSTEX will become a challenge that ultimately leads to a deficit for Iran. Further, considering that the major buyers of Iranian oil are not European—e.g. China, India, Korea and Japan—it is not certain that those buyers would accept transferring payments to INSTEX. That would require complicated negotiations between the parties, where US interference and influence cannot be ignored. Furthermore, even if the Iranian oil revenues pour into INSTEX, Iran will still be restricted from spending the funds on any trade other than medicine and food. Last, but not least, Iran may speculate that its funds being held by INSTEX might become blocked in Europe due to collapse of the JCPOA or other disputes with the US and EU in the future. That would undoubtedly trigger political turmoil both inside Iran and between Tehran and the E3.

The EU’s commitment to Iran was to lift sanctions under the JCPOA’s framework assuming that Tehran also fulfilled its commitments, which it has done to date. Considering the sophisticated and significant nature of EU-Iran trade, establishing a limited trade and financial mechanism like INSTEX does not fulfill the EU’s obligations under the JCPOA. Therefore, if INSTEX does not rapidly accommodate a full spectrum of EU-Iran trade, and if Tehran is prevented from selling its oil to generate required funds, INSTEX will be doomed to fail.

Establishing a sustainable and functioning EU-Iran trade mechanism cannot be done without cooperation with the US. The Trump administration will not hesitate to politically and financially pressure the EU if US sanctions against Iran are circumvented by an EU-based financial mechanism. The US will impose penalties against any trade mechanism that enabled business with Iran without US consent.

In her letter to the president of INSTEX on May 7, the US Treasury Department undersecretary clearly stated: “Engaging in activities that run afoul of US sanctions can result in severe consequences, including a loss of access to the US financial system.”

Even if INSTEX works in practice, it is still unclear if European or even non-European companies and banks, which have much more lucrative business activities with US companies and banks, will be willing to use INSTEX to trade with Iran as the risk of penalties or blacklisting by the US is so high.