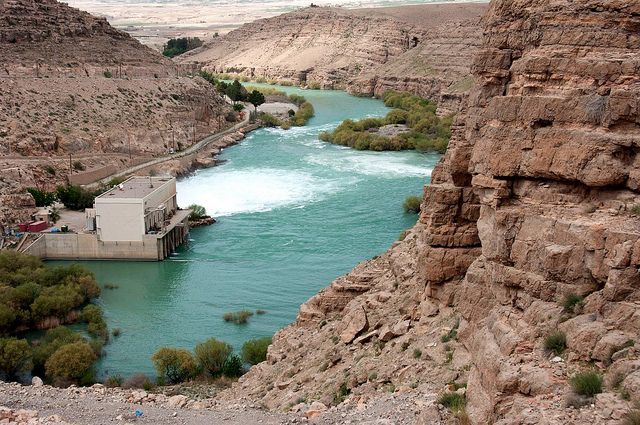 Afghan ambassador to Tehran Nasir Ahmad Nour told the Islamic Republic of Iran News Agency recently that Afghanistan is committed to an agreement sharing the waters of the Helmand River between the two countries. But disagreements continue over an issue that has contributed to an environmental disaster in southwestern Afghanistan and southeastern Iran.
Both countries have pledged to abide by a water treaty that was concluded in 1973.  But disputes over distribution of the water date to the 19th century when Afghanistan was a British protectorate and a British officer drew the Iran-Afghan border along the main branch of the river.

In 1950, Iran and Afghanistan created the Helmand River Delta Commission with the task of measuring and dividing river flow between the two countries. In 1973, a document was signed based on which Iran would receive 26 cubic meters of Helmand river water per second or 850 million cubic meters annually.

However, events such as a 1973 coup in Afghanistan, Iran’s 1979 revolution, the Soviet invasion of Afghanistan in 1979 and subsequent civil war and Taliban rule have all had a disastrous impact on the fate of the Hamoon wetlands, which straddle the Iran-Afghan border and are fed by the Helmand or Hirmand (as it is known in Farsi) river.

In the last two decades, once fertile wetlands have substantially dried up. The Taliban government, with which Iran nearly went to war after Taliban forces murdered Iranian diplomats in Mazar-e Sharif in 1998, closed the sluices to the Kajaki dam on the Helmand until 2002. This compounded the impact of the worst drought the region has experienced in many decades, caused in part by climate change and warming temperatures.

Coupled with the use of inefficient traditional irrigation systems, these factors have taken a terrible toll on wildlife and agriculture in the region. Wetlands have given way to dust and sandstorms; thousands of people have had to flee in search of new livelihoods.

Iran’s Forests and Pastures Organization recently signed an agreement to grant 450,000 hectares of land around Saberi Hamoun to pasture farmers to prevent excessive harvesting of plants and reduce the incidence of sandstorms.

There are more projects planned, including creation of a 100 kilometer green belt around the southern margin of the Hamoun.

The governor of Iran’s Zabol province, Hooshang Nazeri, stated in March that Hamoun’s challenge could only be resolved through a well-informed technical approach.  He went on to say that sandstorms that have created many problems in both Afghanistan and Iran could be resolved with the help of expert working groups. “Universities and scientific centers of both countries can resolve all issues with the help of agreements and memorandums of understanding and in joined sessions and using collective wisdoms, “he said.

The chairman of a Hamoon revitalization committee and a member of the Iranian parliament’s national security commission told Mehr News Agency that lack of attention to the Hamoun situation has caused emigration of 130,000 people, which he called a “national security threat.”

The head of the Natural Resources Administration of the city of Hirmand recognized drought as 40 percent of the reason for the current situation but said that Afghan policies “preventing the flow of the Hirmand into Iran” are responsible for the rest. Reza Najafi, an agricultural official in the Iranian province of Sistan-Baluchestan,called Iran’s share of the river water “unbalanced.”

Hosseinali Shahriari, head of parliament’s health committee,accused Afghanistan of attempting to re-direct the flow of the Helmand by building multiple dams, which he said “would cause the water not to reach Sistan.” He further accused Afghanistan of trying to change the route of the river as “evidenced by satellite photos.”

Meanwhile, the Afghan ambassador to Iran insisted that “based on our information, Iran is receiving more water than its share defined by the agreement.” At the same time, he expressed willingness for an expert committee to investigate whether that share is appropriate.

Iran also objects to the Kamal Khan dam project, which Iran says would severely reduce the water flow to its province of Sistan-Baluchestan.

The Kamal Khan dam project started in 1996 but was stalled by war and did not resume until 2011. The dam is being constructed over the Helmand about 95 kilometers from Zaranj city in Afghanistan’s Nimroz province. The dispute has intensified to such a level that Afghanistan accused Iran in 2012 of conspiracy to sabotage the project by supporting a local insurgency. Iran has rejected these accusations.

Afghans call on their government not to hesitate in building the dam. Afghan President Ashraf Ghani has vowed http://president.gov.af/fa/news/56774 to complete not only the Kamal Khan dam but two others as well.

The Afghan ambassador to Tehran has previously announced his country’s willingness to collaborate on revitalization of the Hamoun wetlands. An Iran-Afghanistan memorandum in January 2016 called for complete implementation of the 1973 treaty and “regular meetings” of Helmand water commissioners.

While improving water management in both countries is more important than ever, opportunities to do so in Afghanistan were lost during the peak of flow of international funds into the country. Without outside assistance and greater local cooperation, the region will be faced with deeper and potentially unresolvable challenges that could have a significant negative impact on the economy and security situation in both countries.

Fatemeh Aman is an expert on the Middle East and South Asia. She has worked as a journalist, media and political analyst, and has written widely in English and Persian on Iran, and South Asia. She is a frequent contributor to Jane’s publications, including Jane’s Islamic Affairs Analyst and Jane’s Intelligence Review, and appears often on Persian and English-speaking media outlets. She is the co-author of Atlantic Council’s report “Iran, Afghanistan, and South Asia: Resolving Regional Sources of Instability.”

Image: The Kajaki Reservoir in Afghanistan, which serves as a holding tank for the Kajaki Dam power house that supplies hydroelectric power for southern Afghanistan. Photo: US Army Corps of Engineers